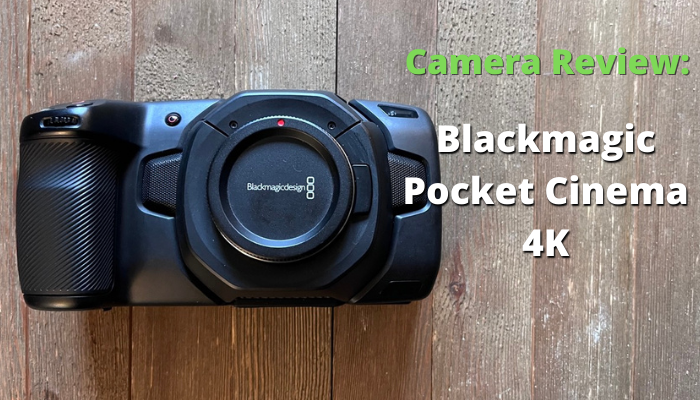 The Blackmagic Pocket Cinema 4K (aka BMPCC4K) was initially released in 2018 by Blackmagic Design.

This camera is an upgrade to the popular Blackmagic Pocket Cinema Camera released several years prior.

More importantly, this camera looked to be an upgrade to the Blackmagic Cinema Camera 2.5K and 4K with its functionality.

According to Blackmagic’s website, the Pocket Cinema 4K offers a list of great features, including a mirrorless 4/3 HDR sensor, dual native ISO with up to 26,500 ISO, and more at a price point of 1,295 USD.

This camera seemed like a dream come true as I was a long-time user of the Blackmagic Cinema Camera 2.5K.

That camera was bulky, had poor low light performance, and had many issues that desperately needed an upgrade.

I was very excited to get my hands on one of these, so I purchased one in June of 2019. I’ve been an owner of this camera for about three years now, so here is my honest opinion of the features.

As mentioned above, the body is made of a carbon fiber polycarbonate composite. It’s a nice build and is not overly heavy.

The name suggests this camera will fit in your pocket (like the older version), but this is deceiving.

This camera is much more compact than box-style cameras with similar functions but is larger than an average DSLR.

The body is 7 x 3.8 x 3.4 inches. It fits comfortably in your hand with the help of a handgrip on this size of the camera, and an added lens should help distribute the weight comfortably.

I shoot a lot of handheld video and have never had issues with my arms becoming fatigued or awkward hand placement.

The back has a stationary 5” 1080p touchscreen, which is a pro or con depending on your shooting style. I certainly wish there was a fold-out screen, but I luckily own a second monitor for accessible viewing.

There are also buttons for the settings, High Frame Rate recording, and a few others.

The right side of the body has an enclosed slot for an SD and CFast card. Both can be used at the same time, which is a major pro of this camera.

The left side of the body has several ports for accessories.

I love all of these ports, although it can make adding accessories messy.

The body also has buttons on the top of the camera. Most of these are pretty similar to other DSLR cameras.

However, there are three buttons labeled “FUNCTION” that you can customize with several features, such as focus assist, false color, and LUTs.

There is a quarter-inch accessory mount on the top and bottom of the camera, and a battery slot for LP-E6 batteries.

This camera has some good functionality out of the box, but you will likely want to invest in a rigging system.

The stationary screen may also mean you will want to get a second monitor. Companies like Small Rig make cages for the BMPC4K that make adding accessories easy.

The battery life on this camera isn’t great. This camera uses LP-E6 batteries, which only last about 30-45 minutes.

I would recommend buying a V-mount over owning several of the LP-E6 batteries. However, the V-mount setup isn’t compact and the batteries are quite expensive.

Check out our guide to Gold Mount vs V-Mount batteries.

Overall, the body on this camera works well.

Readers should note how many added accessories I recommended to make this camera more functional.

I already owned many accessories needed to make this camera fit my shooting style, but you may not have any.

This can be a problem if your budget is limited to the camera, a couple of lenses, and maybe some batteries. You can absolutely shoot this way, but you’ll have an easier time with some of the accessories mentioned.

This camera uses a micro four-thirds sensor that is 10mm x 19.96mm. This gives the image a 1.9x crop factor, which essentially doubles the focal length of the sensor.

For example, using a 50mm lens on the Pocket 4K will have the same focal length as a 95mm lens used on a full-frame camera.

This is either a pro or con depending on your shooting style. Personally, I had already been working with cameras that have a crop factor, so I understood the limitations.

You can buy any MFT lens for this camera. However, I own only EF mount lenses, so I either needed to buy an adapter or speed booster to use my lens kit on this camera.

For EF-lenses get a Metabones SpeedBooster

A speedbooster is a lens adapter that also acts as a focal reducer. This means that the speedbooster can reduce the crop factor of your sensor to give you a wider focal length while also giving a few extra aperture stops.

The most popular company that makes speedboosters is Metabones, which also makes a speedbooster specifically for this camera.

The price tag on Metabones speedboosters is pricey coming in around $600-800 depending on which version you buy.

I bought a Viltrox speedbooster, which is a close competitor to Metabones. I watched several reviews on this speedbooster, and it seemed to be the right choice with a price tag of around $220.

I learned quickly that I should have purchased the Metabones speedbooster instead.

I found that the Viltrox speedbooster had a hazy effect the wider the aperture was open. I shot a short film with this speedbooster, which made nearly all of my footage unusable.

I was luckily able to fix this with Davinci Resolve’s sharpening tools and denoiser (software included with the camera), and I haven’t used the speedbooster since.

The point of this story is to either buy native lenses for this camera or don’t cheapen out on the speedbooster.

My lenses also worked great with a cheap EF to MFT adapter, but I would still like to purchase a Metabones speedbooster at some point.

I should also note that the BMPC4K with a Metabones speedbooster will run you around $2,100. The Blackmagic Pocket 6K runs about $2,000, so it may be better to go with the Pocket 6K if you own EF lenses.

This camera did not exist at the time of my purchase.

This camera has a lot of functionality built inside of it. The camera tells you the basics on the main screen, such as frames per second, shutter speed or angle, iso, etc.

Hitting the hamburger button on the camera will bring up the camera’s menu, which also includes tabs for all of the functions.

The menu is where I think this camera really shines. It’s easy to use and has so many useful tools.

The best footage on this camera comes from the standard 4K or the 4K DCI, so that’s something you will want to note as you will need more storage while shooting 4K.

As mentioned before, you have the ability to shoot on SD, CFast, or SSD. I recommend that you purchase some external SSD drives to shoot with this camera.

This camera only shoots in Blackmagic Raw (with different sizes of compression) and ProRes, so the file sizes are much larger than your average H264 file on most DLSR cameras.

To give you some idea of file sizes, shooting at 23.98 FPS of Blackmagic with 3:1 compression on a 64GB SDXC card will only have about 9 minutes of record time.

Check out our guide What Size SD Card Do You Need For 4K Video? And also our guide to the best SD cards for 4K video.

However, a 1 TB SSD drive will have about 154 minutes of recording time. SSD drives can be pricier, but you will get more storage overall for a less price than an equivalent size SD card.

Check out our article on the best Samsung T5 SSD alternatives for BMPCC cameras that work.

Should you buy this camera?

For me, buying this camera was a no-brainer. I love Blackmagic products, and upgrading to this from my previous Cinema Camera 2.5K was an easy decision.

The camera has a lot of punch for such an affordable price. The image quality easily compares to higher-end cameras, such as some in the RED lineup. It was the perfect camera for me at this price point.

However, it may not suit everyone’s needs. Again, this camera needs a lot of accessories to make it functional on film or video shoots.

The functionality out of the box isn’t enough to get you through an entire shoot. You will need to buy many LP-E6 batteries or a V-mount battery.

It’s suggested that you buy a camera cage for other accessories you may need for this camera to fit your functionality needs.

These accessories can easily add up, which can turn a lot of people off. I think the pros of this camera outweigh these cons.

Blackmagic also makes other versions of this camera. They have since released the Pocket 6K and Pocket 6K pro.

Check out my article on the best cameras for beginner filmmakers.

Both of these cameras solve a lot of the functionality problems mentioned in this article, so these can be better solutions. I have not used either of these cameras, so proceed with caution before purchasing.

Do I think you should buy this camera in 2023? It depends entirely on your needs, and if any of the pros or cons I mentioned fit that mold.

If you need something like a video camera with good autofocus or image stabilization, you should to other brands.

The Pocket 4K is easy to use and produces high-quality video at an attractive price point. I love this camera, but I can also see myself upgrading in the future once something better comes along.

I would love to see Blackmagic make an affordable box camera to compete with RED or Panasonic.