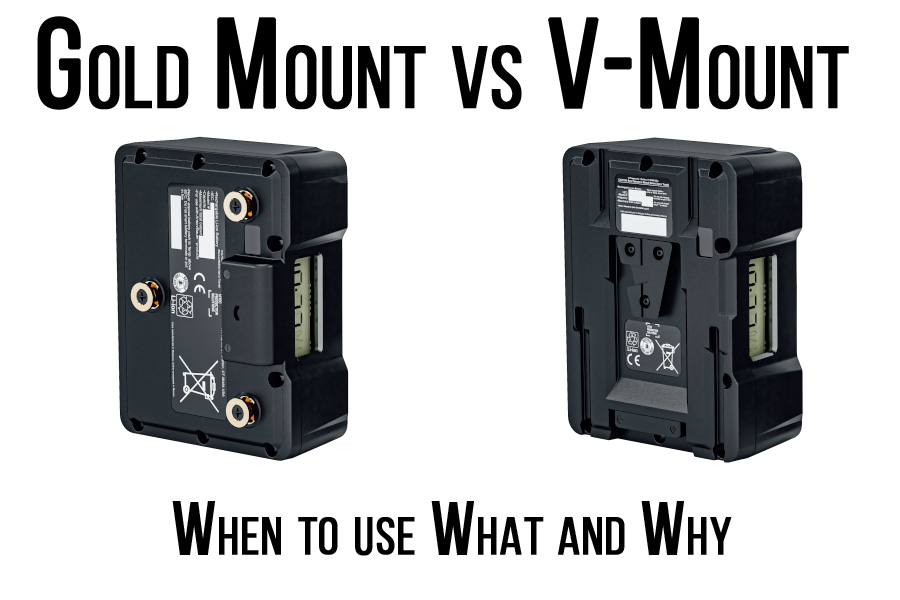 If you’ve ever used an external battery pack for your cinema camera, you’ve probably had the following discussion: Anton Bauer or V-mount batteries – which is better?

This is a general guide to Anton Bauer Gold Mount batteries and V-mount batteries. If you’re instead looking for some budget-friendly batteries, you should check out these two articles:

Now, that’s just an executive summary. Let’s dive into both types of battery mounts individually, explore their strengths/weaknesses, and compare them together against one another.

Let’s start by defining each mount, how they are different, and their core features.

What many cinematographers refer to as the Anton Bauer (or AB) mount is called the Gold Mount.

However, because the Gold Mount is more or less the industry standard, the Anton Bauer brand name has become a shorthand for the mount.

The Anton Bauer Gold Mount has been around since the late 1970s.

It’s built with what’s known as a 3-stud system, which uses three metal mechanical connecting points to safely lock the battery in place with a horizontal spring-loaded slider, which acts as an extra precaution.

This way, even if a battery becomes detached, it won’t slide off and fall to the ground as easily.

Over the years, Anton Bauer battery mounts have been used for all sorts of camera rigs and setups. They are trusted to stay locked in among cinematographers to be used in high movement situations, like on Steadicam rigs or cameras mounted to cars, in harsh conditions, etc.

V-mount batteries, on the other hand, originated as a Sony design. They’re labeled as V-mounts (or V-locks) instead of “Sony” locks because of the V-shaped connection piece at the back of the batteries.

V-lock batteries mount onto a plate that is attached to the camera from there.

While the Anton-Bauer mounts are fairly popular among cinematographers in the United States, V-mounts are more prevalent and used in more camera rigs by cinematographers around the world, in part thanks to their simple and easy to use functionality and universal nature.

V-mount batteries are used by many of the supporting accessories you would use with your camera, like secondary monitors, on-camera LED lights, or other add-ons.

This also means that no matter where you go, more cinematographers or photographers might have extra V-mount batteries you can swap in if yours lose their charge – or you lose your own.

Pros and cons of each.

As stated above, one of the nice things about V-mount batteries is how common they are.

Meanwhile, the problem with Anton Bauer mounts is that they are not as likely to be compatible with other accessories, but that’s nothing an adapter can’t fix – if your budget can spare one.

While the Anton Bauer mounts are less common, they tend to be more reliable than the V-mount batteries and their vertical locking mechanism.

While the V-mount’s vertical sliding mechanism makes them easy to attach, it also makes them just as easy to detach, which is less than ideal for on the go shooting for shooting that involves a Steadicam or car mount.

The AB mount, meanwhile, is more secure due to its 3-stud system with the horizontal lock.

So we know how they should match up in theory. But what about in practice?

According to this Reddit thread on the subject, most users report something to the effect of this statement, which as it so happens, is the top comment on the thread:

“AB is more secure. V mounts have popped off the camera several times in my experience. Usually when you grab the camera and have a hand under the battery.”

According to another user:

“This is the simple and correct answer. Those with experience know that VLock cannot be trusted.”

So if you buy or rent V-mount batteries (especially cheap ones) you might end up paying more in the long run as you’ll be replacing them a lot more.

V-lock mounts have a pin-locking mechanism that holds the battery in place. If bumped the wrong way, this pin can actually come loose.

Since the battery is spring-loaded under the base, that release of tension can knock the battery off the mount. This is what users have the most amount of issues with – there’s no guarantee the battery will stay locked in, especially as the V-locks are used over time.

Meanwhile, AB mounts are locked in place with the 3 metal bolts mentioned above, and when slid on into place, they lock in horizontally instead of vertically. This horizontal orientation also means the spring on the AB mounts works to hold the pins shut tight as well.

Compare that to the spring of the V-mount that’s ready to release the battery and drop it vertically at a moment’s notice, and you have a superior design in the locking mechanism of the AB mounts.

Another massive issue that can come with a battery that doesn’t lock in place properly is a lack of reliable charging.

“I’ve been 2minutes into a 5min take, and I just barely touch the REDbrick and the camera shuts down because of lack of power.”

But what about the Anton Bauer V-mount locks?

It should be no surprise, then, that Anton Bauer even launched their own line of V-mount batteries, called the Titon and Dionic XT series respectively, as well as converters from one battery mount to the other, which you can find here on Adorama.

I haven’t read as much complaints about these AB V-mount batteries.

However, I have heard some mention of the Titon line having some issues between the battery and the charger not 100% always working together. So you might want to look into this further before you buy.

There are a few compelling reasons why you might want to forgo the industry hype about the AB mounts and go with a V-mount instead. For starters, you might be limited to a V-lock system by your surroundings.

As one user reported:

“…most of my country is on V-lock so to have an AB system makes it difficult to get spare batteries quickly and makes your gear slightly less useful as part of a larger kit. My local rental house would like to change to AB but everyone else is running V-lock so they have to stick with it.”

This can be an issue, especially when you’re down on batteries and need someone on your crew to make a quick run or borrow a spare battery or two from a friend.

If you aren’t able to equip the batteries, it’s just like renting a lens but not having the right adapter to use it on your camera.

If you need extra V-mount batteries in a “V-mount-area”, you can at least borrow another from your local rental house or your fellow cine community.

The downside, however, could be expensive replacement fees if the battery suddenly stops working or something.

Another reason you might want to go V-lock instead of AB? AB can be a little more difficult to get set up, so if you’re just doing a one day or two-day shoot, the likelihood of a V-mount failing you is pretty slim.

I could see prioritizing something easy to use over something complicated if you are just trying to get a few days’ worth of shooting in on a particular production.

Is AB vs V-lock the new Mac vs PC?

Probably not. It’s hard to say if V-lock mounts will eventually become obsolete, but with Anton Bauer creating their own V-lock mounts now, I think it’s safe to say they aren’t going away anytime soon.

If the current trends continue, we may just see V-mounts remain the more affordable yet less reliable option, while AB continues to be the slightly more expensive and more reliable standard.

Thus, my conclusion is this: if you are looking for that long-lasting investment, go with an Anton Bauer mount battery, or if you’re looking for a much more affordable, slightly less reliable option that you don’t plan on using for a long time, go with a V-mount!