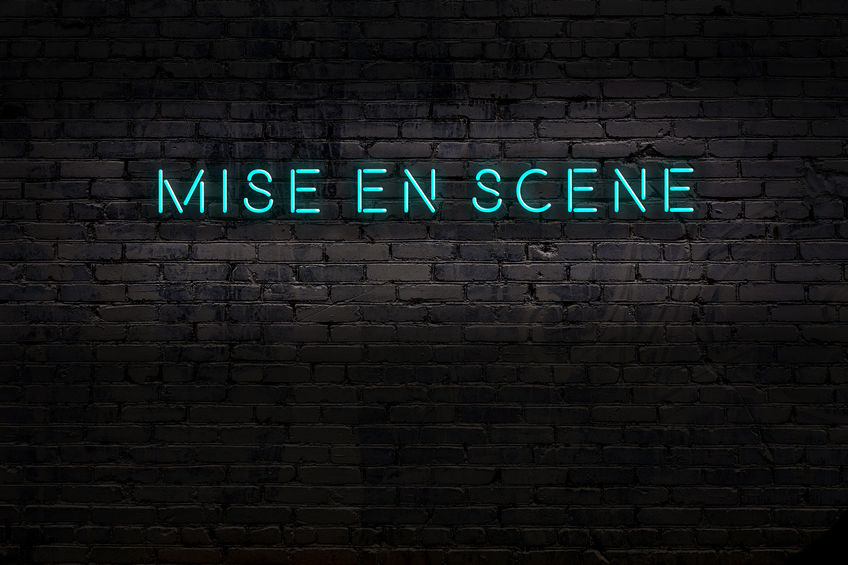 An often-used concept, when people are talking about the film, is the French term mise-en-scene. If you’ve ever wondered what lies behind that fancy French concept, I’ve created this illustrated guide.

But first, let’s have a brief definition of the meaning of mise en scene:

Mise-en-scéne in a film is everything you see on the screen, such as the setting, decor, props, costume, hair, makeup, and lighting. The French phrase pronounced “meez-ahn-sen” literally means ‘staging‘ or ‘putting on action or scene‘.

Believe it or not, there’s a little more to creating a film than just pointing and shooting with a cinematic camera. So let’s break it down in more detail below.

The elements of mise-en-scene help shape the viewer’s emotion and understanding of the characters and the movie’s setting.

Mise-en-scene is the overall feel and appearance of a movie.

Filmmaking considers various elements that together constitute the themes, setting, topics, and mood of a movie. These components are taken into account to present the audience with conventions or iconography such as film genre (science fiction, western, horror, etc.).

How Design and Composition are connected to Mise-en-scene

The two most important visual components of mise-en-scene are design and composition. Every film element intends to have a specific purpose of helping the audience understand the plot, story, and characters of a movie.

The combination of these elements within each film frame provides an overall meaning to the shots and the scene.

This point-of-view shot from the main character brings the audience before a ritualistic ceremony framing the presence of mystery, wealth, and power through the ominous masks and cloaks, the intricate architecture, and the color schemes.

The composition is the balance and the relationship between actors and objects within each space of the shot. It’s the process of planning the design of a movie.

Design is the look of the setting, properties, lighting, and the actors’ determined appearance. It’s the process of the conception and execution of the movie’s format.

This video by CrashCourse provides a quick definition of mise-en-scene and how it encompasses everything captured on the camera.

A movie’s mise-en-scene expresses the vision, mood, and suggestions of the characters’ state of mind.

For example, suppose the film is fantastic, like Harry Potter and the Sorcerer’s Stone. In that case, the design should represent fantasy and magic as pictured below with the wizards’ costumes and cafeteria’s floating candles.

If the film is realistic, e.g. like There Will Be Blood, the design will represent reality and authenticity, as seen in their family’s wardrobe and the barren settlement.

The theme must be appropriate to the narrative of the film. While not always relying on cliches, it’s great if a movie’s design is based on its particular genre.

Who is responsible for the composition and design?

Ultimately, the director, the cinematographer, and the production designer are the key players in executing a movie’s composition and design.

The director must take all the elements written into the screenplay and collaborate with the cinematographer and production designer to executive this vision. Any great movie takes a village of skilled individuals, but to understand mise-en-scene, I’m going to focus on these three specific roles in the filmmaking process.

Now that you have a brief idea of who’s behind the execution of mise-en-scene in the film, let’s take a closer look at design and composition elements.

The Elements of Design

The major elements of design a director, and production designer focus on, in collaboration with the cinematographer, are the setting, decor, properties, lighting, costume, makeup, and hairstyle.

The setting is the realistic or imagined environment in which the film takes place. The decor is the different colors and textures of the interior, exterior, nature, furniture, and other properties (props). The properties are objects like vases, paintings, weapons, or books that help express the characters on screen.

In Guillermo Del Toro’s Hellboy II: The Golden Army, the setting of this library presents a wealth of knowledge and history through the placement of the books and globe, but the placement of the statue reveals to the audience that above all, at the center of this story, is a mystical figure.

Lighting is fundamental in shaping the mise-en-scene by drawing attention through highlights, textures, and shadows to help tell the movie’s story.

Costumes, makeup, and hairstyles are the wardrobe and appearance worn by actors that suggest the character’s traits and image. It’s essential in the storytelling process, whether a simple, natural look for realistic films or an unusual, unnatural look for fantasy films.

Tim Burton’s Edward Scissorhands (1990) the costumes reinforce the contrast of the vibrant conformity of the neighborhood pastel colors to the main character’s pasty, scarred face and tattered black leather uniform.

The Elements of Composition

The major elements of composition a director and cinematographer focus on, in collaboration with the production designer, are the framing and kinesis of each shot, including the light, shade, line, and color. These elements can create an illusion of depth, or a flat image, and help the audience interpret the characters’ physical, emotional, and psychological relationships.

Get an in-depth look at the importance of framing and composition in The Cinema Cartography’s YouTube video on the Composition in Storytelling.

The movie’s frame can imply a point-of-view, whether from a single character or an omniscient perspective. The point-of-view and the use of onscreen and offscreen space are elements of mise-en-scene.

The use of open frames is designed to imply characters’ mental or physical freedom, while closed frames depict outside forces like fate or government have taken away their freedom.

The kinesis or movement of objects, characters, or the frame itself is part of a movie’s composition and mise-en-scene. The process of planning the positions and movements of the cameras and the actors is called blocking.

In this StudioBinder YouTube video, get a brief look into how a few of the most famous filmmakers use blocking to create their iconic storytelling and mise-en-scene style.

Now that you know the basic definition of mise-en-scene and its relation to filmmaking, you can go back and rewatch all your favorite movies with a brand new perspective.

Pay close attention to the visual components of design and composition and each of its elements.

Each design and composition element is meant to influence, and emotional response or help tell the story.

When filmmaking, consider each shot, the space of each frame, and how well the production designer, cinematographer, and director must collaborate to create the perfect mise-en-scene.