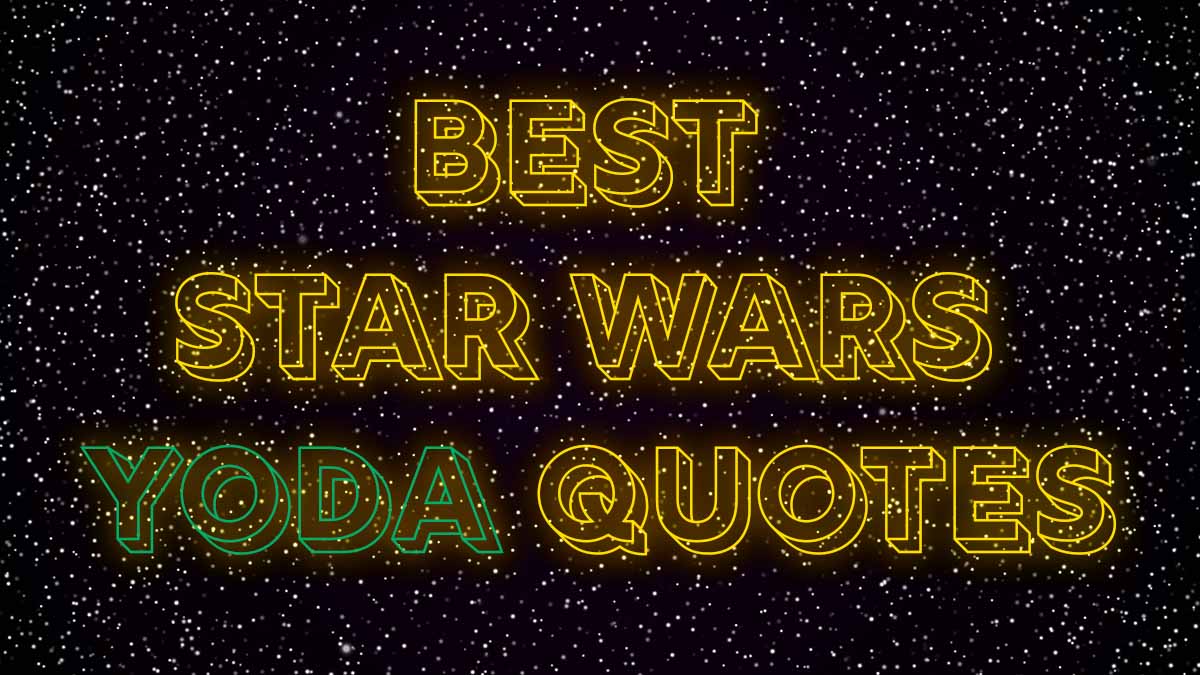 The Star Wars franchise consists of some of the most philosophical anecdotes in film history through its mystic characters, expansive lore, and historical allegories.

While many a legendary Jedi Knight dropped words of wisdom throughout the galaxy, none hold a candle to the pint-sized green wordsmith, Master Yoda.

The perfect blend between an ancient philosopher and a comedic fortune cookie, Yoda’s words manage to transcend every generation of the Skywalker legacy and Star Wars fandom.

If you’re looking for inspirational quotes to hang above your fireplace mantle or you’re just an obsessed fan like me, Star Wars Yoda quotes are influential words to live by.

“A list of the powerful Yoda quotes collected, I have.”

SPOILER ALERT! If you’re an untrained padawan or have no idea what that means, skip ahead and check out the list of every major Star Wars film in the order you should watch.

Oh, by the way… how’s your knowledge of the meaning of lightsabers and their colors?

Now, use the force and meditate on the best Star Wars Yoda quotes ever below.

Luke Skywalker (Mark Hamill) is deep in his adult Jedi training and immediately falls with defeat when he realizes his X-Wing starfighter is too big to lift out the swamp using Force powers.

Jedi Master Yoda (Frank Oz) quickly checks our young padawan and reminds him that size doesn’t matter. It’s all in how you work it.

This message holds throughout every generation of late Jedi training in the Star Wars franchise, from the original, prequel, and sequel trilogies.

Check out this rare The Empire Strikes Back behind-the-scenes footage.

21. “A Jedi uses the Force for knowledge and defense, never for attack.”

After a day of running through the swamp-like Indiana Jones with the elderly Yoda on his back, Luke has a moment of doubt when he realizes the Dark Side might be more powerful than the Force.

Remaining vague that the identity of Obi-Wan Kenobi’s (Alec Guinness) apprentice and Darth Vader (voiced by James Earl Jones) is one of the same, Yoda explains to Luke that Jedi use their abilities for more than weapons.

This statement establishes that their true power lies in philosophy, not physicality.

20. “You must unlearn what you have learned.”

At the peak of Luke’s resistance to Master Yoda’s training, he states that it’s impossible, to which Yoda replies, “always with you what cannot be done.”

At this moment, Luke learns it’s not only about what lesson’s he doesn’t know which keep him from growing; it’s about unlearning ways of thinking that prevent him from progressing.

Luke Skywalker crash lands on Dagobah, the remote planet of swamps and forest, only to find a small, elderly alien with a peculiar sense of humor.

When the strange alien responds to Luke’s inquiry for a search of a “great Jedi Master,” Yoda responds with “Wars not make one great,” confirming that he is this Jedi Master he seeks, but his humility takes precedence.

18. “Fear is the path to the Dark Side. Fear leads to anger. Anger leads to hate. Hate leads to suffering.”

Episode I: The Phantom Menace

Little Anakin (Jake Lloyd) and his Jedi Master Qui-Gon-Jin (Liam Neeson) beg the Jedi Council in the Jedi Temple of Coruscant to let Anakin train become a Jedi even though he’s technically too old.

A room full of Jedi Masters couldn’t deduce that Anakin’s age and emotions were not an ideal recipe for a great Jedi Master. Thus nobody prevented the origin story of Darth Vader.

This pivotal scene marks the end of the 3D-animated series The Clone Wars with the darkest revelation from Yoda (voiced by Tom Kane).

Fellow Jedi Masters Mace Windu (voiced by Terrance C. Carson) and Obi-Wan Kenobi (voiced by James Arnold Taylor) join Yoda at the end of the Clone Wars for one last word of wisdom.

Yoda concludes that he is uncertain that winning a war possible and admits that their victory may not be within their lifetime.

These words foreshadow the future of the Skywalker legacy and the Star Wars franchise.

16. “Death is a natural part of life. Rejoice for those around you who transform into the Force. Mourn them do not. Miss them do not.”

Episode III: Revenge of the Sith

Anakin Skywalker (Hayden Christensen) meets privately with Master Yoda (Frank Oz) to discuss a series of visions that haunt him in his sleep.

Anakin’s constant fear of death amongst his loved ones is a callback to the Jedi Council’s initial concerns as fear itself is a path that leads to Dark Side.

15. “The dark side clouds everything. Impossible to see the future is.”

Episode I: The Phantom Menace

Yoda leads a discussion within the Jedi Council, admitting they have no real idea what’s happening.

Unbeknownst to all Jedi, Dark Sidious (Ian McDiarmid), a Sith Master, conspires to destroy them and take control of the galaxy, and he’s only a hallway away.

After he helps Luke set ancient Jedi texts aflame, force ghost Yoda provides his old padawan with another dose of tough love, reminding him that we learn the most from the moments we fail.

Mace Windu (Samuel L. Jackson) and Yoda recount the defeat of Darth Maul (Ray Park) and confirm that he was, in fact, a member of their greatest, The Sith.

Utterly unaware of Darth Sidious existing right under their noses, they have no idea if Maul was the master or the apprentice. This rule foreshadows the arrival of new apprentices Count Dooku (Christopher Lee) and the eventual Darth Vader.

Episode II: Attack of the Clones

Obi-Wan Kenobi (Ewan McGregor) desperately seeks advice on locating a missing planet at the center of his investigation of missing Jedi Master Sifo-Dyas.

He is challenged by the adult Jedi mind’s convoluted wisdom until the younglings’ innocent reasoning explains that someone removed the missing planet from the archives.

11. “When nine hundred years old you reach, look as good you will not.”

Episode VI: The Return of the Jedi

Luke returns to Dagobah after rescuing his friends to complete his training. Yoda uses his charismatically vague dialect to express that he wasn’t born yesterday. His wisdom and experience go back almost 1,000 years.

For that reason, although he may appear not physically capable, his knowledge is paramount.

When Yoda uses his abilities to lift the X-Wing starfighter from the swamp, Luke finally witnesses the full physical power of the Force to which he exclaims, “I don’t—I don’t believe it!”

Yoda receives this as a proclamation that Luke’s biggest failure is not in the strength or knowledge of what he can achieve but in his belief of what he can.

9. “Difficult to see. Always in motion is the future.”

While he wants to rescue them, Yoda warns him that the outcome is uncertain, and if he attempts to save them, he could sacrifice they’re fighting to protect— him.

Before his training with Master Yoda, we briefly saw in Episode IV: A New Hope the extent of Jedi powers with Obi-Wan Kenobi’s mind tricks and Luke Skywalker destroying the Death Star.

Before Luke enters “the inmost cave” to progress in his training, Yoda tells him that this next battle will require his mental abilities and not his lightsaber and blasters.

Episode III: The Revenge of the Sith

Order 66, the assassination of all Jedi, is executed. However, Master Yoda survives and discovers the connection between Supreme Chancellor Palpatine and Darth Sidious.

It appears that Palpatine’s Force Lightning bests Yoda, but he quickly recovers, draws his lightsaber, and one of the most epic battles between the strongest Jedi and Sith in the galaxy ensures.

In The Empire Strikes Back and the prequel trilogy, we see the Skywalkers battle their inner demons to unlock their true potential with the Force.

For the first time, Master Yoda is face to face with a shadow of himself. He learns that his usual tactics won’t work this time.

5. “Luminous being are we… not this crude matter.”

Luke Skywalker classically is a big crybaby and claims he can’t do anything right. Yoda reassures him that the Force and their existence are more than just physical matter.

Everything that surrounds them is connected and is as one. This message begins to break down the walls of insecurity Luke’s once normal placed up.

4. “Train yourself to let go of everything you fear to lose.”

Episode III: Revenge of the Sith

At the end of Yoda and Anakin Skywalker’s private conversation regarding Skywalker’s dark vision, he learns the only way to protect himself is to detach himself from everything he loves ultimately.

The answer isn’t what he was seeking, and his immediate retreat in the shadow of the room is a sign of his new distrust of Jedi practices.

Episode VI: The Return of the Jedi

The penultimate scene of Yoda’s death confirms Darth Vader’s true identity and the reveal of Luke’s sister being Princess Leia.

Here is the dialogue of the entire moment:

Master Yoda: [pauses, turns back over away from Luke] Rest, I need. Yes… rest.

Luke Skywalker: Yoda, I must know.

Master Yoda: [pauses again] Your father he is. Told you, did he?

Master Yoda: Unexpected this is, and unfortunate.

Luke Skywalker: Unfortunate that I know the truth?

Master Yoda: [turns back to Luke again] No! Unfortunate, that you rushed to face him! That, incomplete was your training! That, not ready for the burden were you.

Master Yoda: Remember, a Jedi’s strength flows from the Force. But beware: Anger, fear, aggression. The Dark Side are they. Once you start down the dark path, forever will it dominate your destiny. [growing weak] Luke… Luke… Do not… Do not underestimate the powers of the Emperor, or suffer your father’s fate, you will. Luke, when gone am I, the last of the Jedi will you be. Luke, the Force runs strong in your family. Pass on what you have learned. [very weakly] Luke… there is… another… Sk-Sky…walk…er… [lies still, fading into nothing a moment later]

This simple phrase that challenges Luke’s reluctance explains the culmination of all Master Yoda’s teachings. Instead of “trying” and putting forth a minimal effort, Yoda instead instructs him to give it everything or nothing.

It’s one of the most famous movie quotes in the world. Almost every hero in the franchise’s 12 films and dozen shows has used this phrase to message solidarity, hope, and encouragement. The Star Wars franchise could not exist without the Force.

Every Star Wars Movie You Should Watch (In Order):

To deny this ranking of the best Star Wars Yoda quotes is a path that leads to the Dark Side.

What do you think about the list? What are your favorite quotes from Star Wars?

Don’t be afraid. Fear is the path to the Dark Side.

May the Force be with you.