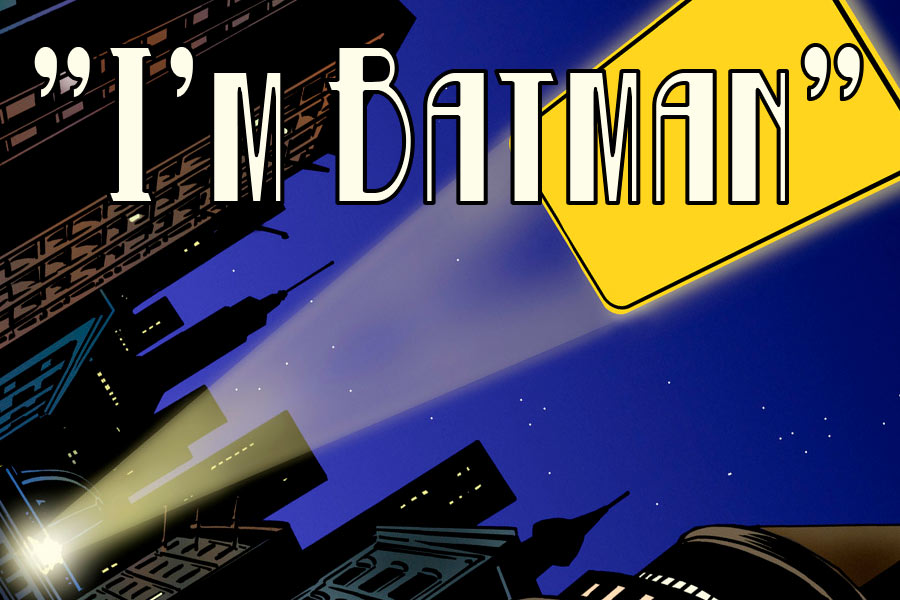 Batman movies are filled with awesome quotes, snappy comebacks, and one-liners that have become cult in cinema history.

However, some of the best Batman quotes are not from the hero himself, but from his multiple nemeses like the Joker or Two-Face or from his loyal friend and guardian Alfred Thaddeus Crane Pennyworth.

If you want to check out some of the funniest quotes from Batman’s archenemy, have a look at the best Funny quotes from the Joker himself.

I’ve made sure to include a small origin backstory about each quote as context.

“I’m Batman” is usually preceded by a “Who are you?” or “What the hell are you?” from a scared bad guy who’s about to get his a** whooped. Here it is first in two versions:

The quote (you could almost call it a motto) “I’m Batman” first appears in the Tim Burton movie Batman (1989), starring an excellent cast with Michael Keaton as Batman, Jack Nicholson as the Joker, and Kim Basinger as the Catwoman.

Of course, Batman is not only the Batman, he is also vengeance served. This quote is from The Batman (2022) and appears just at the beginning of the movie. And the sequence and context plays out a lot like the “I’m Batman” quote that takes the number one spot on this list.

The quote helps establish Batman (Robert Pattison) as the savior of the night of Gotham City, a city that is “eating itself” because of all the crime and corruption that’s going on.

I loved this quote and the new take on the masked vigilante in The Batman, which plays more like a neo-noir detective novel than a comic book adaptation.

After getting the mobsters’ attention with a little “magic trick,” the Joker (Heath Ledger) demands half of their money to take out the Batman. It’s an awesome scene with so many good lines, and Ledger’s performance blows me away every time.

Batman movies are known for their cool opening sequences, and I think The Batman does an amazing job at this as well. Just watch the opening scene above.

It’s excellent screenwriting at play, and after the first 10 minutes, there’s no doubt about how much Batman is feared among the criminals in Gotham City.

Robert Pattison does an amazing job with the opening monologue. Here it is in full:

Thursday, October, 31st. The city streets are crowded for the holiday… even with the rain.

Hidden in the chaos is the element, waiting to strike like snakes. And I’m there too. Watching. 2 years of nights have turned me into a nocturnal animal.

I must choose my targets carefully. It’s a big city. I can’t be everywhere. But they don’t know where I am.

We have a signal now, for when I’m needed. When that light hits the sky, it’s not just a call–it’s a warning. To them.

Fear is a tool […] They think I’m hiding in the shadows – but I am the shadows. I wish, I could say I’m making a difference, but I don’t know.

Murder, robberies, assault–2 years later, they’re all up. And now this.

This city’s eating itself. Maybe it can’t be saved, but i have to try… push myself.

These nights all roll together in a rush, behind the mask. Sometimes in the morning i have to force myself to remember everything that happened.

“We live in a society where honor is a distant memory. Isn’t that right… Batman?” – The Joker (Jaret Leto) in Zack Snyders Justice League (2021). The line comes from an old internet meme, but the Joker has never actually said it in any comic or movie… that is, until now!

“It’s not who you are underneath, it’s what you do, which defines you,” is said by Rachel Dawes (Katie Holmes) in Batman Begins (2005) as a comment to Bruce Wayne’s apparent flamboyant and superficial lifestyle.

Later Bruce reveals himself as Batman to Rachel when he paraphrases the line as “It’s not who I am underneath, but what I do, that defines me.”

7. “The night is darkest just before the dawn. And I promise you, the dawn is coming.”

“The night is darkest just before the dawn. And I promise you, the dawn is coming.” is spoken by Harvey Dent (Aaron Eckhart) in The Dark Knight (2008), just before he gives himself up as Batman by paraphrasing the first quote on this list: “I am the Batman.”

8. “Endure, Master Wayne. Take it. They’ll hate you for it, but that’s the point of Batman, he can be the outcast. He can make the choice that no one else can make, the right choice.”

“Endure, Master Wayne […]” is said by Alfred Pennyworth in The Dark Knight (2008) to help cheer up Bruce Wayne/Batman after the Joker (Heath Ledger) threatens to kill a lot of innocent citizens of Gotham City unless Batman reveals his true identity.

9. “All I have are negative thoughts”

This powerful line is said by Arthur Fleck (Joaquin Phoenix) in the movie Joker (2019) to the disinterested social worker (Sharon Washington). The full quote goes like this:

“You don’t listen, do you? I don’t think you ever really hear me. You just ask the same questions every week: “How’s your job?” “Are you having any negative thoughts?” All I have are negative thoughts! But you don’t listen anyway. I said, “for my whole life, I didn’t know if I even really existed. But I do! And people are starting to notice.”

This quote is said by Bruce Wayne (Christian Bale) in Batman Begins (2005). After being gone for 7 years and being trained by Henri Ducard (Liam Neeson) from the League of Shadows, Bruce Wayne decides to take on the criminal underworld in Gotham City as a symbol. It’s a turning point for the movie and a rebirth for Bruce.

11. “Have you ever danced with the Devil in the pale moonlight?”

“Have you ever danced with the Devil in the pale moonlight?”

is most famously said by The Joker (Jack Nicholson) to Bruce Wayne (Michael Keaton) in Batman (1989).

But it actually appears earlier in the movie, when The Joker has not yet become the joker but is a low-life criminal gangster Jack Napier (as opposed to a failed stand-up comedian or the Red Hood persona), that shoots young Bruce Wayne’s mother and father.

However, here the line is, “Have you ever danced with the Devil by the pale moonlight?”

In this scene from Batman Forever (1995), Dr. Chase Meridian (Nicole Kidman) uses the Bat-Signal to get close to Batman (Val Kilmer) to seduce him.

The whole dialogue is pretty funny, and it has a couple of other great and famous lines to it:

BATMAN: Commissioner Gordon?
DR. MERIDIAN: He’s at home… I sent the signal.
BATMAN: What’s wrong?
DR. MERIDIAN: Last night at the bank, I noticed something about Two-Face–his coin… it’s his Achilles’ heel. It can be exploited.
BATMAN: I know! You called me here for this? The Bat-Signal is not a beeper!
DR. MERIDIAN: Well, I wish I could say that my interest in you is… purely professional.
BATMAN: You’re trying to get under my cape, Doctor?
DR. MERIDIAN: A girl can’t live by psychosis alone.
BATMAN: It’s the car, right? Chicks love the car.

It’s a great and witty dialogue… plus…. Bat rubber nipples!

13. “You either die a hero or you live long enough to see yourself become the villain.”

The quote, “You either die a hero or you live long enough to see yourself become the villain,” is said by District Attorney Harvey Dent (Aaron Eckhart) in The Dark Knight (2008). Still, on the good side, it works as an ominous forewarning of what is to come, as Dent later becomes supervillain Two-Face.

This spicy quote is said by Selina Kyle, aka Catwoman (Michelle Pfeiffer) in Batman Returns (1992). The full line is,

This line is said by The Riddler (Jim Carrey) in the movie Batman Forever (1995).

In a surprising role that somehow was a good fit for the comedic over-the-top comic style of the Batman franchise movies from the late 1980s and the 1990s, I think Jim Carrey actually did a good job.

Another funny quote from Batman Returns (1989) is from the scene where Batman comes to rescue the Ice Princess (Cristi Conaway).

BATMAN: Gotta Hurry
ICE PRINCESS: Thank you.
BATMAN: I was set up to look like I did this.
ICE PRINCESS: No sweat, I’ll just tell the police I was kidnapped by an ugly birdman with fish breath.
CATWOMAN: Somebody say fish? I haven’t been fed all day.
BATMAN: Eat floor! High fiber.

17. “Your anger gives you great power. But if you let it, it will destroy you… As it almost did me.”

In this scene from Batman Begins (2005), Bruce Wayne (Christian Bale) is taken under the wings of his mentor Henri Ducard (Liam Neeson) and given some sound advice.

DUCARD: You’re stronger than your father.
WAYNE: You didn’t know my father!
DUCARD: But I know the rage that drives you… that impossible anger strangling the grief until the memory of your loved one is just… poison in your veins. And one day, you catch yourself wishing the person you loved had never existed… so you’d be spared your pain… I wasn’t always here in the mountains… Once, I had a wife. My great love. She was taken from me. Like you, I was forced to learn there are those without decency who must be fought without hesitation, without pity. You anger gives you great power. But if you let it, it will destroy you… as it almost did me.
WAYNE: What stopped it?
DUCARD: Vengeance!

Liam Neeson does an excellent job delivering this monologue. It’s also a subtle way of saying the clichéd villain line: “We are the same you and I…”.

This line appears in Tim Burton’s Batman (1989). The Joker (Jack Nicholson) has become pretty annoyed with the Batman (to say the least) and decides that it’s time to kill the bat – but not before he has let off some steam on the poor television set.

Those are the top 18 quotes from Batman movies if you ask me.

Who am I to judge, you say?