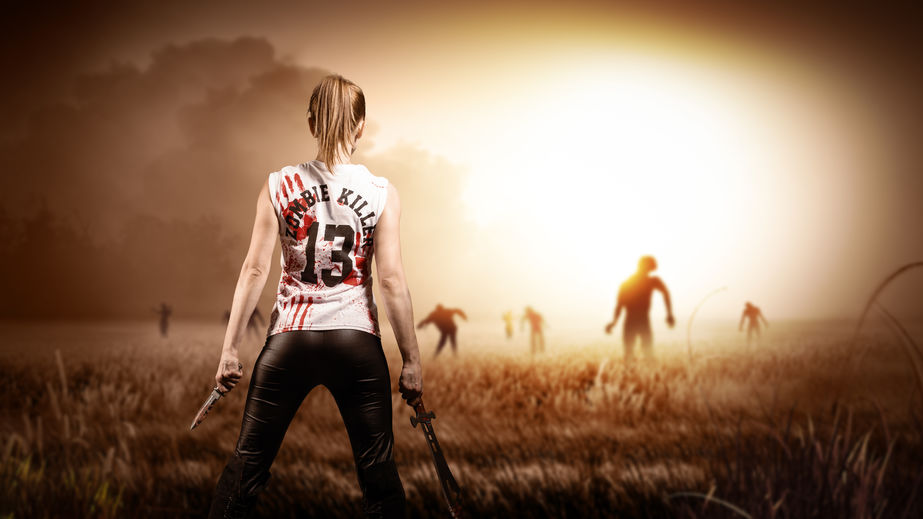 WARNING: This article contains excessive use of puns, blood, and gore. Read at your own risk.

There must be something in the water. No matter how many times the genre appears to die, somehow, it always comes back to life.

Tip: See the best zombie movies of all time.

In general, the horror genre is arguably one of the most famous cult film genres of all time, and this is especially true for the zombie subgenre. But why are zombie movies in particular so popular?

Read more about the difference between the horror and thriller genres in film.

The reason zombie movies are so popular is a combination of low budgets, high returns, and suspenseful action. Zombie movies ticks of all the boxes when it comes to triggering our guilty human desires to experience our most basic instinctive fears (as categorized by Dr. Karl Albrecht) of extinction, mutilation, loss of autonomy, separation, and death of the ego.

That’s the short answer. Now, let’s explore the zombie apocalypse in more detail. Join the ride if you dare. And remember to bring a baseball bat.

Why Are People Obsessed With Zombies?

Most of us can remember the nostalgic scares we got from horror icons like vampires, superhuman killers, and ghosts, but there’s something special about the zombies. The love for these ghoulish, brain-eaters is unrivaled and undying. People love a good scare.

I’m not an evil scientist, but my research leads me to find the source of the zombie craze lies in the love of fearful themes that frighten, excite, and baffle the audience.

According to Dr. Karl Albrecht’s “Feararchy,” our most instinctive fears can be broken down into five categories:

See the best end-of-the-world movies of all time ranked.

Where Did the Zombie Movie Originate?

There’s not a person out there, alive or undead, who hasn’t seen at least one zombie movie in their lifetime. But, when did the first real zombie hit the silver screen?

Before the iconic zombie movies of the 60s onward, there was the 1932 film White Zombie.

The viral outbreak of zombie fandom truly began following George A. Romero’s Night of the Living Dead (1968). The mindless, cannibalistic zombies in this film presented everything audiences feared and craved, including extinction, mutilation, separation, impotence, and ego death.

Like most zombie movies, it was shot against a reasonably small budget of $114.00 US. The sustained international and domestic popularity over the years has earned it more than 250 times its budget.

The graphic nature and social commentary earned Night of the Living Dead a place in the National Film Registry and a cult following that leads to decades of remakes, renditions, and homages to the genre staple.

Beyond the fear factor, zombie movies like Romero’s usually involve social commentary, other popular genre themes like humor, which make the films accessible to a broader audience.

The Rise of the Genre-Bending Zombie Movie

Take Edgar Wright’s 2004 horror-comedy Shaun of the Dead starring Simon Pegg and Nick Frost. Two dimwitted buddies, Shaun and Ed, are caught off-guard by a zombie apocalypse in London and flounder to rescue their family and friends.

The brutal nature of zombies and Dr. Albrecht’s “fearachy” work as a great plot device for the story of a struggling slacker trying to win back the love of his life.

The original model of suspense and horror is wholly replaced with humor and gore. And it works.

The genre-bending continues with Jonathan Levine’s romantic-comedy Warm Bodies based on Isaac Marion’s novel about a romantic relationship between a woman and an actual zombie. The movie is told from the zombie’s perspective as he begins to regain humanity through his newfound love.

The blend of other popular genres into the world of zombie culture increases the appeal and allows for a wider audience. Over time zombies have infested almost every form of entertainment from movies, television, music, and art.

Michael Jackson’s Thriller is classic, but nothing holds a candle to the epidemic that would ensue after adapting the 2003 comic book series, The Walking Dead.

The AMC television series The Walking Dead (2010) incited a new milestone for the zombie apocalypse fandom crossing over into primetime television and mainstream media. The first season alone brought in 6 million viewers and high ratings and continued to climb in the following seasons.

Amid its third season, The Walking Dead became one of the first cable series in television history to have the highest total viewership of any fall season show for adults.

According to the AMC website, after 10 seasons and nearly 150 episodes, The Walking Dead is one of the most-watched television series ever.

For a genre to rise from a grave of campy gore to a popular viral sensation is a clear indicator as our world’s population grows, so does our vulnerability to zombie culture worldwide.

Attempting to rank zombie movies individually is about as hopeless as trying to survive an outbreak without the right supplies. With the many George A. Romero films and successful genre sequels out there, I decided to select some of the best zombie movie franchises of all time.

Although many of the following franchises originate from other media forms, this list doesn’t account for the successful television series, comic books, or video games starring our favorite brain-eating superstars.

Zombieland (2009) was an instant hit. Taking all the necessary body parts from past zombie franchises, this superstar-led cast brought new life into the aging genre with modern comedy and a new way of engaging the audience with the consistent breaking of the fourth wall (i.e., speaking to the audience).

Based on the popular Japanese video game franchise, Paul W. S. Anderson’s Resident Evil (2002) brought another take on the zombie craze to the silver with an action-packed adventure less focused on gore scares.

This new interpretation of the zombie movie brought an entirely new generation of audiences with Milla Jovovich as the leading action hero.

Danny Boyle’s 2002 zombie movie resurrected the once dwindling genre with a post-apocalyptic world with all the right ingredients– a contagious virus, infected zombies, and very few survivors.

Despite a limited release, the film became a hit in the United States and was followed with an equally successful sequel– with talks of more on the way.

Sam Raimi changed the game when The Evil Dead (1981) hit the silver screen. The original film fits right in with the rest of the 80s horror classics, placing teenagers peril with demonic possession and zombies in the middle of the woods.

The Evil Dead was followed by two direct sequels, a 2013 reboot, and a follow-up TV series. The sequels became a genre staple once they departed from the original and presented a more comedic tone.

5. White Zombie & Revolt of the Zombies

You have to give credit where it’s due, and without Victor Halperin’s White Zombie (1932) and its sequel Revolt of the Zombies (1936), the genre may have never successfully transitioned from an old storybook onto the silver screen.

Originally from the minds of George A. Romero and John Russo, the Romero-led franchise produced some of the most popular zombie films of all time, including the original Night of the Living Dead and its campier and gorier successors, Dawn of the Dead and Day of the Dead.

Thanks to the “Father of American Zombie Movies,” franchises, comic books, television shows, and video games have the blueprint of what constitutes a great zombie story.

Prepare Yourself For The Zombie Apocalypse

The popularity of the zombie genre in film and television has had a series of renaissances since the 1930s.

Thanks to lingering classics like White Zombie and Night of the Living Dead or the modern success of Zombieland, 28 Days Later, and The Walking Dead-series, the genre continues to sell tickets and populate almost every medium of entertainment imaginable.

Some of the success owes to the low budgets, high returns, and suspenseful action. But the human’s natural guilty desire to experience fearful themes of mutilation and annihilation from afar also has a big role to play.

No matter how many times the genre appears to fade, it somehow always comes into the mainstream.

Take it from Dawn of the Dead’s Peter, “when there’s no more room in Hell, the dead will walk the Earth.” – Again!

2 thoughts on “Why Are Zombie Movies So Popular?”