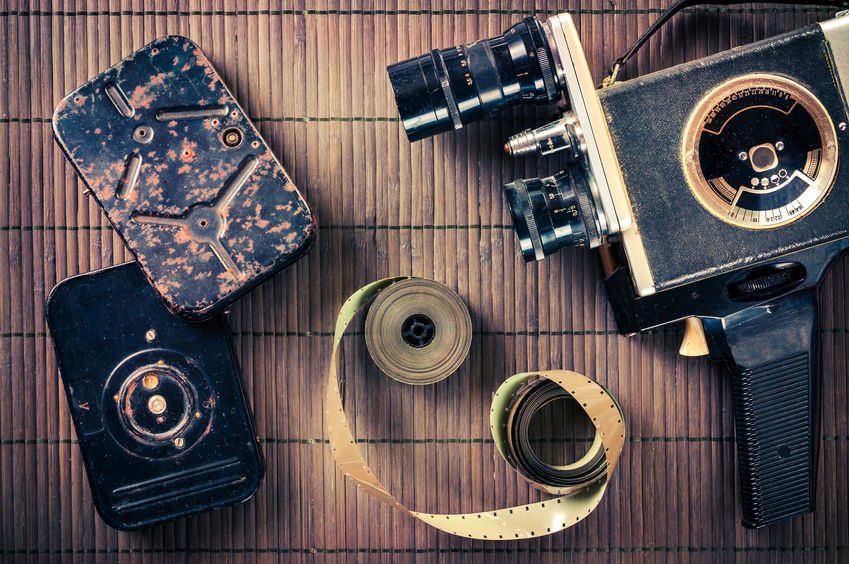 So, when was the first video camera invented?

Louis Le Prince is credited with patenting the first 16-lens movie camera in 1888. However, the Kinetograph, which was patented in 1891, is considered the first functioning movie camera in a single housing. The first mass-market video cameras were released in the early 1900s. The first color video cameras were released in the 1950s.

Let’s deeper into some of the first breakthroughs within film and video cameras that have led to the cameras we all love to use today.

When Was the First Movie Camera Invented?

However, as we’ll see, this is a simplified version of the story, as many bright minds rushed to invent a working movie camera in this golden age of inventions.

Dickson was a Scottish inventor and employed by Thomas Edison in the late 1880s. He designed and patented the Kinetograph, which used an electric motor to rotate a sprocket wheel containing a film strip.

After exposing a frame, the sprocket rotated to expose the next frame. The film strip could then be projected on a screen to show a series of images.

While most historians credit Dickson with inventing the movie camera, the modern movie camera is derived from the work of several 19th-century inventors.

Shortly after the invention of the photographic camera, inventors worldwide sought to create the first moving picture camera.

They wanted to find a way to capture a sequence of images on a single film cylinder or roll of film and project the moving images onto a screen.

Competition in the race for creating the first movie camera

Already in 1882, french scientist Étienne-Jules Marey invented the chronophotographic gun. It could shoot 12 images per second on a chronomatographic plate (not celluloid) using a metal shutter.

In 1889, two years before the patent for the Kinetograph, Wordsworth Donisthorpe patented a camera – the Kinesigraph – that could capture and project a series of images.

Wordsworth happened to be from Leeds, which was also the hometown of Louis Le Prince. Louis Le Prince had already in 1886 applied for an American patent with sixteen lenses that could capture and project moving images.

The patent was granted in 1888, but not for cameras with one or two lenses. Louis Le Prince mysteriously disappeared in 1890, which has led to everything from assassination conspiracies to a theory about suicide due to financial troubles.

To protect his invention, Edison filed a caveat with the Patents Office on October 17, 1888.

Another early example of the motion-picture camera is the Pleograph, developed by Polish inventor Kazimierz Proszynski in 1894.

The Pleograph was both a camera and a projector. Several years later, Proszynski created the Aeroscope (see below), the first compressed air camera.

The brothers also developed the Cinematographe, which could record at a speed of 16 frames per second.

And by the end of the 19th century, camera companies started to manufacture movie cameras for the public.

When Was the First Video Camera Released to the Public?

The first mass-market video cameras were released in the early 1900s.

An early example is the Aeroscope, which was a handheld camera released in 1911. It used compressed air to advance the film, eliminating the operator’s need to turn a crank.

The Aeroscope could carry 400 feet of 35 mm film and operate for up to 10 minutes. It was simple and reliable, but also too expensive for the average consumer.

When Was the First Color Video Camera Invented?

The first color video cameras were released in the 1950s, with the advent of color television and Eastmancolor. However, filmmakers began experimenting with the use of color in the early 1900s.

The first use of color in film involved the use of color filters called additive color systems. The filters gave the image a different hue but did not provide multiple colors.

Kinemacolor was the first practical use of a two-color system for motion pictures.

It was demonstrated in 1906 and released several years later. It involved printing alternating frames of black-and-white film with alternating red and green filters.

The film was then projected through a projector that also contained alternating red and green filters. The filters on the projector separated the colors on the film, creating the impression of a limited range of colors.

Kodak helped improve the use of color in the film industry with the release of Kodachrome. The original Kodachrome was a type of film with three layers. A black-and-white film strip was sandwiched between a red and green layer.

During development, the color dyes from the red and green layers would appear on the film strip. As with the additive color systems, Kodachrome produced a limited range of colors. It should not be confused with the Kodachrome film that Kodak released in the 1930s.

Technicolor was the first company to release a viable option for producing a color film that did not rely on filters. The color process was used to film the 1922 movie, The Toll of the Sea, but the technology remained expensive.

In 1932, Technicolor released a three-color film dying process that produced more vibrant colors. However, the film required cameras developed by Technicolor. Film studios had to rent the cameras from Technicolor.

When Was the First Portable Video Camera Invented?

The Aeroscope may be considered the first portable video camera, as it could be operated in extreme conditions. It was first released in 1911.

However, it was mostly used by filmmakers and news reporters to capture war footage during World War I.

The first entry-level camera designed specifically for the public was the Kodak Instamatic M2 Movie Camera.

It was released in 1965 after the development of the Super 8 mm format film. Unlike the Aeroscope, the Kodak M2 was an affordable, consumer-grade movie camera.

It was easy to use, as it had a fixed-focus lens and a fixed movie speed of 18 frames per second. The camera used Super 8 mm film cartridges.

The typical cartridge could film several minutes of footage. After reaching the end of the reel, the cartridge would need to be sent to a camera lab or photo center for development.

The release of video camcorders eventually led to the end of consumer interest in Super 8 mm movie cameras.

Video camcorders record footage to video cassettes. Instead of getting a cartridge developed, consumers could instantly playback the video on their home VCR systems.

Video cameras in the 1960s and 1970s – the introduction of casettes

Throughout the rest of the 1960s and 1970s, Kodak, Canon, and other camera manufacturers released new and improved Super 8 mm film cameras.

They were popular for filming home movies and amateur films.

While the Aeroscope and Kodak M2 may be considered the first portable movie cameras, not all historians call them “video cameras.”

A video camera is occasionally defined as a camera that records footage onto a videotape cassette. And footage from, e.g., the Kodak M 2 had to playback on a film projector and not a Betamax or VHS machine.

In the 1970s, video cameras used for television broadcast were mounted on pedestals and wired to video cassette recorders in other rooms.

The use of video cassettes eliminated the need to develop film, allowing news stations to broadcast recorded segments faster.

However, the portable recorders were bulky and required an extra crew member.

Sony was the first to release a camera that included a built-in video cassette recorder.

The Betacam was released in 1983. It was the first portable video camcorder (camera + recorder). Throughout the 1980s and 1990s, camcorders became more portable and affordable.

In the early 1990s, Sony and other companies began experimenting with digital technology, leading to digital cameras’ release.

The footage was recorded to digital media, which allowed for smaller, more compact video cameras.

So that’s it: a brief history the first cameras that eventually led to the cameras we love to use today.

I think it’s fun to dive into the history of technology from time to time as it really makes me appreciate the amount of inventions which have gone into the small powerful cameras we use today.

It will be interesting to see where cameras are in 10, 50, or even 100 years. I’m guessing contact lenses for the eyes that also act as cameras or brain sensors that can detect and render the images we’re thinking about.

If this post is somehow found in an ancient internet archive in 500 years, it would be fun to see how far off, I probably was.