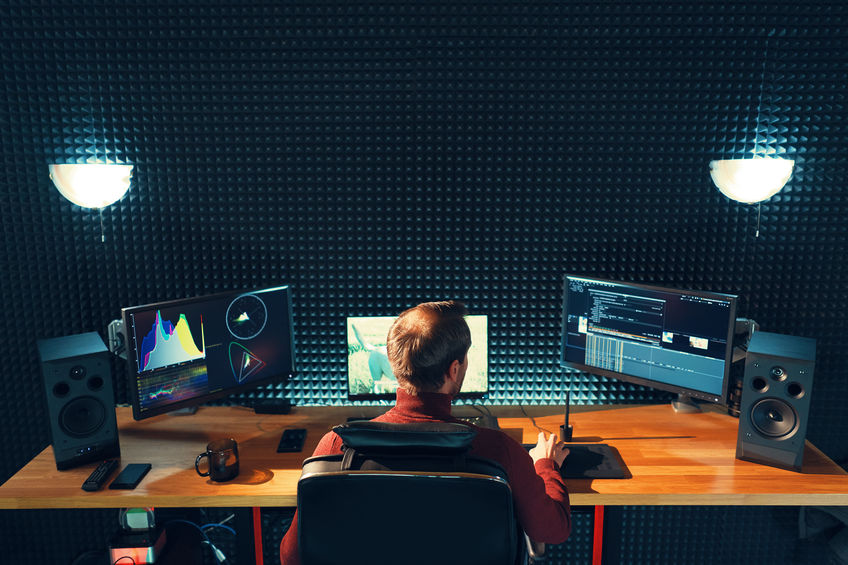 You see a Hollywood movie nowadays, and you are mesmerized by it!

But do you know how much work is done by the video editors to create such phenomenal movies?

Video editing is a massive industry, and it is growing each year exponentially.

It is also increasingly accessible to edit videos and create brand new, more beautiful ones.

You need a capable computer and an eye for details.

Let’s take a look at a few video editing techniques that might spark your interest to become a video editor.

It involves copying video clips from one tape to a new one in a specific sequence.

For example, tape 1 has ten scenes of 5 minutes each. You need 4 of those, so you bring another tape and copy only those four scenes from tape 1 to tape 2.

The resulting tape two has been created linearly.

Back in the days, this was one of the few video editing methods used because people didn’t have access to computers and video editing software.

As you can probably imagine, linear video editing comes with a few disadvantages.

For example, you cannot erase data from tape 2 and begin all over again if you made a mistake. You need to start from scratch which takes time and effort.

The process begins by copying raw video footage into a computer. This footage is then opened up in an editing program such as Adobe Premiere Pro and Final Cut.

The editor has full control over the editing process. He can create a new video file with different scenes, arrange them in any order he wants as well as insert and delete them if necessary.

Once the editing process is complete, the new video clip can be copied on a CD or USB memory stick. It can also be uploaded online.

Non-linear video editing is very popular these days and used by many companies to create brand new video footage quickly and easily.

Offline video editing is another technique that consists of making a copy of the raw video footage and compressing it to a smaller resolution.

The editor creates a duplicate of an existing raw video and compresses it into a format such as ProRes. This smaller resolution footage is called proxy footage.

The editor works with the proxy footage, making adjustments, adding/deleting clips and so on.

When the editing process is done, the editor exports the project but allows the original raw video footage to replace the proxy footage.

This technique is usually used when the editor doesn’t have a sufficiently capable machine to edit video clips in raw format.

As you probably already know, editing a 4K video clip requires a lot of processing power and most computers aren’t equipped to do that.

Many beginner video editors don’t have the necessary budget to invest in a more powerful machine yet, so they rely on offline cutting to achieve their goals.

The smaller resolution footage (proxy footage) is easier to work with and doesn’t need a lot of computer resources.

The editor uses the proxy footage to edit video clips and exports the final version with the original, raw video footage.

This technique is rarely used nowadays, but it is still a vital video editing process.

The editor doesn’t create proxy footage. Instead, he works directly with the raw video footage to make adjustments, inserting or deleting clips, etc.

Assemble video editing is a raw type of editing which consists of putting together a series of video clips without any transitions between them.

The video clips are “glued” together in a linear fashion, without adding smoothing effects or visual improvements.

It is also known as punch-and-crunch editing.

This technique gives the editor more control when creating a new project, in comparison with assembling editing.

For example, let’s say that you want to add a video clip over video footage of someone speaking. If you do this with assembling editing, the result looks unpolished, and the new video footage will also replace the audio track.

If you do it with insert editing, it creates clear beginning and endpoints, and you can preserve the original audio footage.

The ending result is a more polished product that has a more powerful visual impact.

Initial video assembly is the first stage in a video editing process. It involves arranging the video clips from the order they have been filmed to the order they are displayed in the final cut (end product).

A rough cut is the second stage of a video editing process and usually a very complex one.

It involves trimming video shots and adding titles, graphics, and video effects. The audio soundtrack is still there, but not yet polished. The colors of the video during this stage are also unmatched and require additional improvement.

The final cut is the third stage of a video editing process. The video clips and audio tracks are polished, and final adjustments and arrangements made.

The audio tracks and sound effects might still need improvements, and this is done during the mixing process by a professional sound editor.

The last step before a video is released is usually some kind of color correction.

Color correction is done to match the colors of the different shots used in the film which might have been recorded at different locations, at different lighting conditions, and with different cameras.

The color temperature can influence the viewer’s mood and appreciation of the video clip.

The color temperature refers to the tint of the color in a video clip.

It is measured in Kelvin, and it can range from cold to warm.

Bespoke means made according to the requirements of a project or customer.

For example, you might capture 5 hours of video clips at a party and want to create a final product no more than 30 minutes in length.

You use special video editing software to do this. The process implies manually selecting which video clips are to be eliminated and video clips and those who should be preserved.

Sometimes bespoke editing is used to create video clips with a particular final size, let’s say no bigger than 1GB so that they can be uploaded online or burned into CDs/DVDs.

It implies using multiple video sources and cameras routed together in a single console that is displayed live on television.

Compression. Reducing the size of your footage

Compression is a process that involves reducing the amount of data a video file has.

It is done to make the download and upload process more comfortable or to save space.

For example, you have a 1GB video file, but you need to upload it online where the video size limit is 200MB.

You use compression to reduce the size of the video without deleting scenes or making other adjustments.

Bit Rate. Reducing the size of your footage

Bit rate refers to the amount of data stored in each second of the video.

It is usually measured in kilobits per second or kbps. The more data is stored in each second; the more detailed the images will be. At the same time, a video with a higher bit rate will occupy more space on a disk.

The compression technique radically reduces the bit rate of a video to make it fit a certain size. Although it can take time to compress a video, it is an excellent method of saving disk space.

Aspect ratio. Changing the dimension of your footage

Aspect ratio is a common term found in video and image editing.

It refers to the dimensions of a particular image or video files such as height and width.

The most common aspect ratios used are 4:3 or 16:9. The first number always refers to the width while the second one refers to the height.

Computers, TVs, and laptops that use a wide aspect ratio such as 16:9 or 21:9 are more suitable for watching movies and video clips.

On the other hand, screens with a 4:3 ratio are usually more suitable for document reading.

Now you know more about video editing than most people, and as you can see, it’s not that difficult to understand.

Video editing is a logical process, and once you learn the ropes, it can be highly entertaining to do it as a hobby or for a living!

About the author
Nick Gold is a content writer for hire specializing in health and tech topics. He writes regularly on multiple websites including and . In his spare time, Nick takes care of his cat, Zorro, and occasionally enjoys a pizza, his favorite cheat meal.
Website: https://nickgwriter.com/
Facebook: https://www.facebook.com/nickgwriter
Twitter: https://twitter.com/nickgwriter