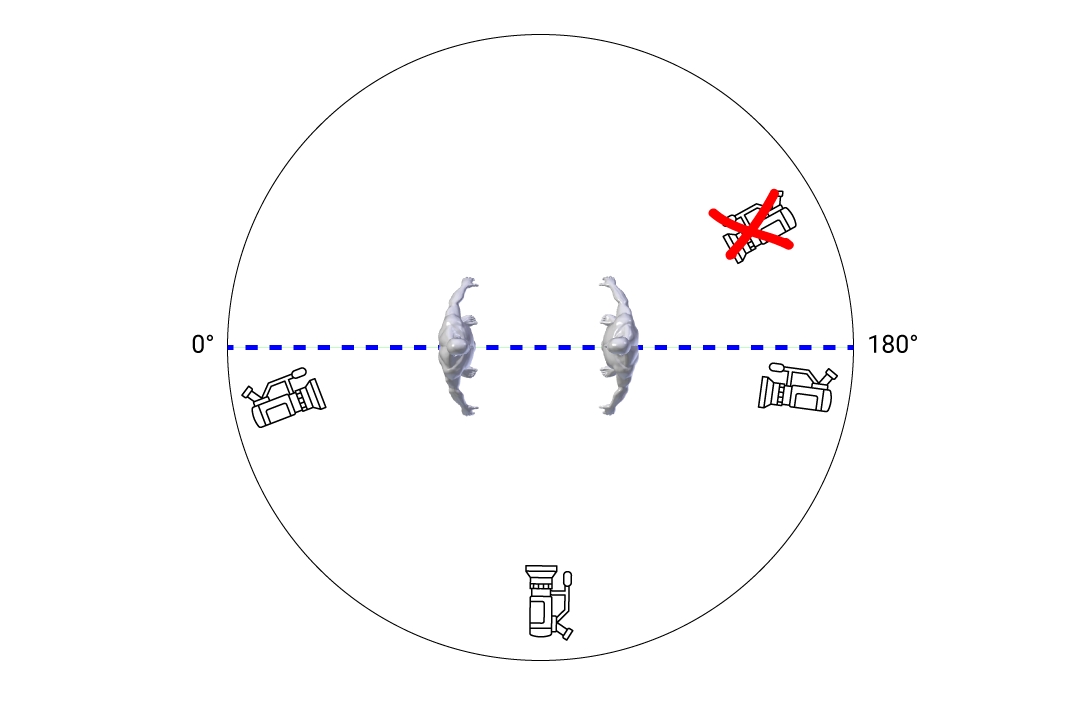 If you have anything more than a passing interest in film and filmmaking, then you’ve probably heard of the 180-degree rule. Like most filmmaking principles, the 180-degree rule is not hard and fast. It can be broken at certain times when there is storytelling intent behind it.

Before we talk about breaking the rules, however, we’ve first got to answer the fundamental questions: What is the 180-degree rule and what is its purpose in filmmaking?

Essentially, the 180-degree rule oversees the spatial relationships between characters in a scene. It is represented by an invisible line between two characters. This helps inform camera placement, allowing scenes to be shot in a way that one character is always on one side of the frame and the other on the opposite side. Adhering to this rule helps audiences visually identify the placement of characters in relation to each other and their location.

Let’s break it down in depth below.

What is the 180-degree rule in media?

In geometry, you learned that 180 degrees constitute half of a circle. Though filmmaking is in 3D space, we still apply this horizontal plane to our scenes.

Picture two characters are standing across from one another inside our aforementioned circle. Now, draw a straight line from one to the other, bisecting the circle. This is our 180-degree line.

What we’ve just drawn up for ourselves is a plane between the actors that will act as a wall for our camera placement. Basically, in order to keep some uniformity in the shots, the camera should stay on one side of this 180-degree line for the duration of the scene.

This is helpful for the classic, “two-shot, OTS (over-the-shoulder), reverse-OTS” setup commonly used in dialogue scenes.

What Happens if the Line is Crossed?

Because not breaking 180 is the established rule, audiences are used to seeing two characters framed on one side of the frame and looking one direction, even when you pull out to a two-shot or master.

Breaking 180 means the position of the characters in frame will reverse, and so will the direction they’re looking.

Crossing the 180-degree line, also known as “breaking 180” or a “reverse cut”, can be a very jarring experience for the audience, and you risk breaking the immersion of the film for a few seconds while they re-orient in their heads where the characters are and who’s looking at whom.

This is not a good thing unless of course it’s planned, but we’ll get more into that later.

If you’re confused about who’s on what side of the screen and looking where fear not. Let’s have an example:

The camera pulls a medium shot of Character A, positioning them frame left and looking right.

Now, if we’re following the 180-degree rule, then Character B should be framed in a medium shot as well, positioning them frame right and looking left, staying on one side of the imaginary line between the actors.

But let’s say you break 180 for Character B, and cross that line to the other side. What we end up with is Character B also positioned frame left and looking right, the same as Character A.

Now, both Character A and B are on the same side of the frame looking the same direction, like they’re standing next to one another looking at something, but in fact, they’re looking at each other.

This will instinctively confuse the brains of your audience, and, while not completely destructive to your film, it is unfortunately noticeable.

If you unintentionally broke 180, there’re a few things an editor can do to fix it.

The most obvious is simply choosing a different shot selection where 180 is (hopefully) not broken. If you don’t have any other shots, then a clever bit of dialogue overlap can maybe mask the jump for most of the audience.

While you should be doing this anyway for smoothly cut dialogue scenes, it is especially good for masking an accidental jump over the 180-degree line:

If Character A is on-camera and speaking, don’t cut directly to Character B when they start their lines. Instead, let Character B’s lines come in for a second or two while still keeping Character A on-camera. Then you can cut.

This audio transition will hopefully mask the jarring jump of the eventually cut that will follow.

Well… no. Sometimes there are artistic reasons to break the 180; sometimes, it’s a choice. It’s essential to understand the rule, so that, when you do decide to break it, you do just that, decide.

Plenty of filmmakers have broken the 180-degree line for specific reasons at particular points in a scene. Sometimes, that jarring feeling is what you want.

As always, let’s use an example:

We find Character A and Character B together again, discussing something very important and dramatic. We start on one side of the 180. Cut back and forth etc.

Then, Character B reveals something big, something that alters both Character A’s and our understanding of Character B’s motives. Earth-shattering stuff.

Suddenly, we’ve broken 180, crossed to the other side, slapping the audience in the face both with the story and with the shot selection. Why would the director choose to do this?

Whatever it was that Character B revealed, it’s meant to shock the audience. So, let’s say the director wants to drive this point home as hard as he or she can. Rather than relying on just the script and delivery of the actor playing Character B, the director decides to jar the audience technically as well, flipping the camera over the 180-degree line, confusing to our eyes as well as our brain.

This isn’t the only feeling jumping the 180 can elicit. Filmmakers like Jean-Luc Godard and Stanley Kubrick have been known to break the rule to cause disorientation, drama, or a break in visual rhythm.

Camera Movements and Breaking the 180 Rule in Cinematography

Keep in mind that cutting isn’t the only way to break the 180.

There are a variety of subtler ways, depending on the effect you’re going for. For example, you can…

Rules are Meant to Be Broken

Yes, I know it’s called the 180-Degree rule, but rules, in filmmaking especially, are more suggestions than anything. Don’t let your creative expression be constricted by the 180-degree line now that you understand it.

The key is to understand what it is and what it’s good for, then you can decide how to break it for artistic effect. Think about what the audience will feel when the line is crossed and determine whether it is warranted in a specific scene.

Got any tips of your own regarding the 180-degree rule? Anything to add? Leave a comment below and let us know!