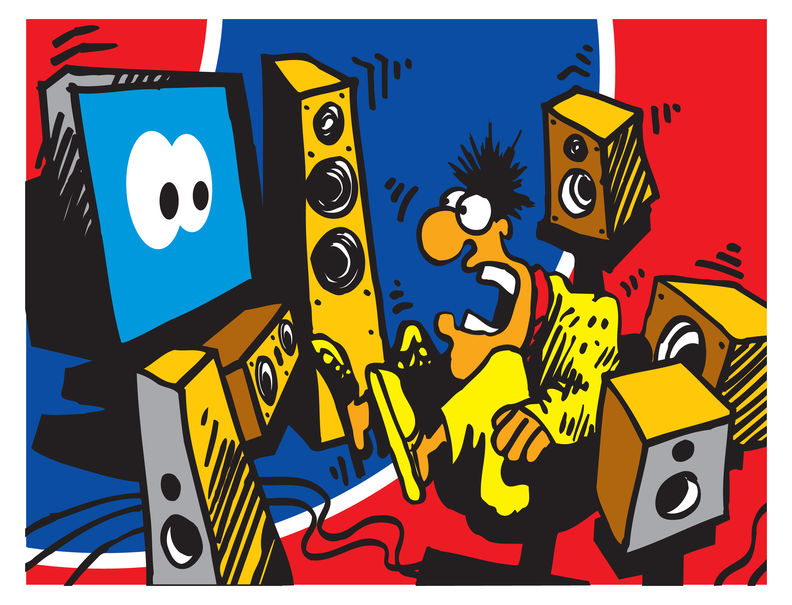 Music and sound design are just as important elements for your short film or feature as the pictures.

Understanding the diegetic and extra-diegetic aspects of your film and how it can be used to communicate to the viewer (and listener) is key for designing an effective soundscape.

But what does the term diegesis mean, and how does it relate to sound and music?

And why should you care about these rather academic terms?

Well, let’s break it down.

What does Diegesis mean?

The term diegesis is connected to the narrative and is originally found in the work The Republic by Platon.

The term has undergone multiple transformations within academia throughout the years, and I won’t go into all the different theoretical nuances here. Instead, I’ll refer to English Professor Dino Franco Felluga, who defines diegesis as:

”A narrative’s time-space continuum, to borrow a term from Star Trek. The diegesis of a narrative is its entire created world. Any narrative includes a diegesis, whether you are reading science fiction, fantasy, mimetic realism, or psychological realism. However, each kind of story will render that time-space continuum in different ways. The suspension of disbelief that we all perform before entering into a fictional world entails an acceptance of a story’s diegesis”

To put it in other words, diegesis is the entire narrative world created, not only in a single film but also across multiple stories across time in a shared universe.

Think about franchises such as Star Trek, Star Wars, or the Marvel Universe, where different stories develop across different timelines, in different settings, and even in different media (comic books, movies, books, animated movies, toys, and more).

With a definition of diegesis in place, let’s have a look at what this has to do with sound in film.

Diegetic and Extra-diegetic Sound and Music in Film

Diegetic sound (or music) is sound that originates from within the narrative of the film.

If a gangster fires a gun, the sound of that gun is a diegetic sound (also if the sound is a sound effect, which is added in post-production). The point is, that the sound of the gun originates from within the film narrative.

Likewise, it is considered diegetic music when the pianist Sam – “Play it again, Sam” – plays the tune ‘As Time Goes By” at the bar in the movie Casablanca.

But when you hear the score of ‘The Empirical March’ by John Williams in Star Wars, it is not part of the narrative and thus extra-diegetic or non-diegetic, whichever you prefer.

Now, I could go into an academic discussion about whether not there’s a difference in nuance between extra-diegetic and non-diegetic, but that would be beside the point for this article.

What is important to understand, is that extra-diegetic sounds and music are not a natural part of the film’s narrative, but something extra – a sonic context – for the film.

If Darth Vader had blasted ‘The Imperial March’ from the speakers of a boombox at the bridge of the Death Star the composition would have been part of the film’s diegesis, and thus diegetic sound instead.

Like characters and objects, diegetic sound can be placed on-screen and off-screen, i.e. inside or outside the frame of each frame in the film.

Effective use of off-screen sounds is a great way to make each frame – or the screen – seem bigger than it is.

For example, you might show the character in your short film walking down a dark country road when you hear the sound from a car approaching from somewhere outside the frame.

Your typical extra-diegetic sound score is always off-screen, as it isn’t part of the diegesis.

Likewise, if you do a voice-over for a documentary, animated explainer video, or commercial, the voice-over is also extra-diegetic off-screen.

Below, I’ve created a small table with a couple of typical examples for the different types of sound found in each type. Keep in mind that sounds can easily jump from one cell to another as the framing shifts in a scene.

Why Should I Care About Diegetic and Extra-Diegetic Sounds?

You can use these terms to analyze what other sound designers have done. That way you can develop a better understanding of sound in film.

So even though you might usually just add sounds that fit on the go, being extra aware of how your sounds are related to the story and frame can help you create a better sound design for your own movie.

For example, you can introduce objects from off-screen to on-screen to create a more coherent world: if a car is approaching from off-screen, you can use a J-cut to fade in the car sound to the loudness level of when we finally see it on-screen.

Likewise, you can use an L-cut when it drives from on-screen and into off-screen.

Second, you can use off-screen ambiance sounds or walla to create a much larger 3D-space than what is seen on-screen.

Is your protagonist sitting in an apartment in a busy city? Make sure to include some city background noise to give the viewer a sense of the city. Ask yourself questions like, is it a small scale town or a big metropolis? Is it a dangerous city (maybe add some sirens)?

And if you’re mixing in surround-sound, using diegetic off-screen sounds gives you so many opportunities for giving the viewer extra information about the depth and direction of diegetic objects and characters in a scene.

Also, if you’re shooting a horror short, using diegetic off-screen sounds is a great way to induce a sense of horror and anxiety in the viewer.

In fact, the horror genre often excels at this, because there’s so much information you can convey to the viewer through sound.

Often, in the horror film genre, you don’t want to give away everything about the big monster in the end. Visually, you might choose to just reveal a bit of scaled skin, some sharp teeth or a knife. – Or you might choose to reveal nothing visual at all.

In that case, using off-screen diegetic sounds is your biggest friend, as you can build a sense of horror from creaking floorboards, howling in the distance, and so much more. And you can give a sense of the size of the beast, e.g. create a bigger monster by adding more bass frequencies to footsteps.

In fact, a diegetic omnipotent and ubiquitous character, which is consequently placed off-screen, and only revealed through sounds effects is called l’acousemêtre (a term coined by film researcher Michel Chion in his excellent book Audio-Vison: Sound on Screen).

Analysis of a Couple of Interesting Examples

So let’s break down a couple of interesting examples, so you can get a sense of how analyzing the sound using diegetic and extra-diegetic sounds can help you stress the points you want to make as an instructor or sound designer.

The first example is from the movie The Truman Show (1998) starring Jim Carrey.

Have a look at this clip:

Listen to the music, which is composed by Philip Glass. You might think, that this is just your typical extra-diegetic off-screen film score, and it certainly seems to start this way.

But as the camera shows more of the control room with Ed Harris, we get to see, that it is, in fact, Philip Glass himself, who sits at the piano and plays while Truman sleeps. The track is called ‘Truman Sleeps’, by the way.

In the scene, we are taken from the diegesis of the tv-program called “The Truman Show”, which is what is available to the fictional viewers in the movie, to the control room, where Christof (Ed Harris) has the power to “play God” and manipulate the characters in the show.

We are given a “behind the scenes” look of the show, and the transformation of the music from being extra-diegetic off-screen to being diegetic on-screen sound, the director Peter Weir, stresses the fact, that we as the viewers are given a sense of power.

It’s a powerful position, which isn’t available to the viewers of the show, and – especially – not available to Truman himself, who at this point is unaware of the whole setup.

Also, by being let into the control room and seeing the film score being made, it helps stress the big themes of the film:

If there is a God, we’re all just puppets constantly being manipulated (e.g. by soothing piano sounds), nothing is random but everything is controlled by a higher deity we cannot see nor reach.

Then there’s the whole question about, what is the reality and what is fake?

By transforming the music from being off-screen extra-diegetic to on-screen diegetic, we are taken through these different realities in an effective way.

There are a lot of other themes going on in this excellent movie, and the sound design does a good job of reflecting these, but I’ll let you explore more of these in order to keep this article short.

The scene starts with the off-screen diegetic voices of Ferris Bueller’s mother and father.

First, we hear the mother over the title – even before we get to the first establishing shot, where we also get to hear the voice of the father.

Then we cut to a close-up of Ferris, while we still hear the voices of his parents. We still haven’t seen the parents, so they’re still diegetic off-screen. After this, we finally get to see the parents.

Already, you get the sense, that the parents are in the background, not in control, which is true for the rest of the movie.

Cut to around 2:33, where Ferris has tricked his parents into believing he is ill. The parents leave the room, and suddenly Ferris Bueller (Matthew Broderick) turns his head and addresses the audience directly with a, “They bought it!”.

By breaking down the fourth wall in this way, as Ferris does a lot of times during the movie, suddenly his voice breaks the walls of the diegesis. It goes from being the on-screen diegetic voice of our protagonist to being a sort of meta commentator on the diegesis.

This elevates Ferris to a position of power, which seems to extend beyond the diegesis. For example, it’s through this protagonist narrator, we get to learn a lot about the difficulties of his friend Cameron.

It is also interesting to note, that whenever Ferris is in the diegesis, he lies, steals, and skives school, but when he addresses the audience, he is always honest and sincere.

It’s as if this omnipotent role, uplifts his character’s morale, to one of God, i.e. the voice of the Father, who always speaks the truth.

I know making videos and films is a very hands-on craft.

But that doesn’t mean, that you should neglect academic tools and terms, which often offer something unique when it comes to understanding the essential building blocks of a movie.

In this case, the building blocks are the many different ways sound design can be employed, to stress important elements in your film.

Knowing how to analyze and utilize diegetic and extra-diegetic sound and music can help you raise awareness of your soundscape, and help you create sound design all-over. It can help you better stress important aspects of your film, by making you ask yourself the question: “WHY do I want a sound here, and WHAT should that sound be?”

Got any good examples of sound design, you want to share? Or maybe some questions or critique? Let me know in the comments below.