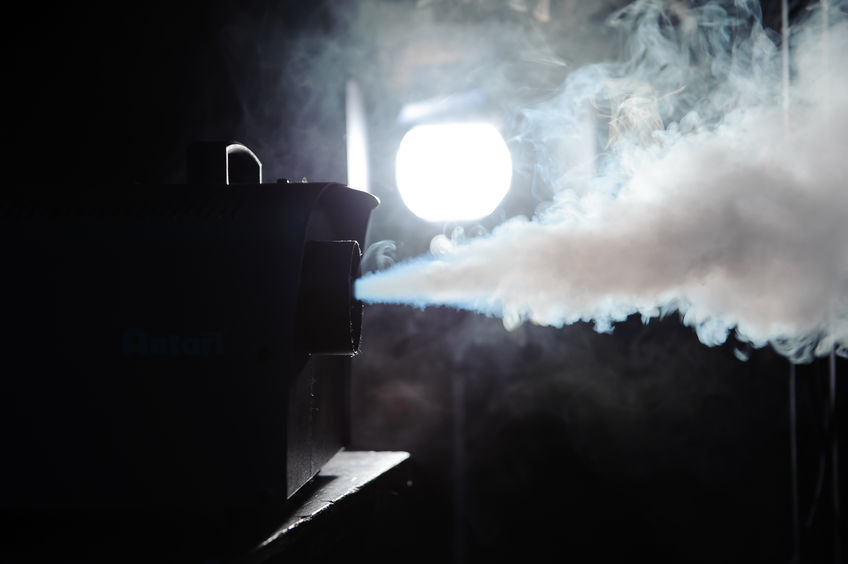 When you want to add a bit of extra athmosphere to your scene, filling the air with some kind of particles and the letting your video lights shine through the fog, might be just what you need.

Adding some extra smoke or haze to a scene can really spice up a scene, whether you’re shooting a music video, a product video, or a scene for your upcoming zombie horror short film.

Using a fog machine of some sort, lets you control the atmosphere of a scene, so you don’t need to smoke ten packets of cigarettes or wait for a foggy morning to be able to get the shot you want.

In this quick guide, I’ll walk you through the different types available. So let’s dive in.

Fog machines fill the room with smoke. That is why they are also known as smoke machines.

Fog machines create white and dense bursts of white smoke clouds, which is great if you want to create the illusion of fire or a smoky poker room in the back of a saloon.

Fog machines are smaller and lighter and more mobile than hazers. A good, versatile, and powerful (but still mobile) option is the ADJ VF1600 1500-Watt fog machine, which you can find here on Amazon.

Smoke machines are usually turned on for a short period of time and then switched off again when the desired atmospheric density is achieved. And then repeated.

Smoke machines work by heating a glycol-water-based fluid (with a heating element inside the chassis), which then is pumped out of the machine.

Depending on the fluid you pour in it, you can control how dense and thick your fog will be. Fluids are usually marked as light, medium, or heavy.

Compared to the other fog options mentioned in this article, smoke particles are big and heavy, and they sink to the floor before dissipating.

Generally speaking, the fog from smoke machines is not meant to stay in the air for very long, but they are great for a quick effect.

A particular kind of smoke machines are know as ‘low foggers’.

Low foggers create dense and hefty smoke, which creates a big cloud of smoke near the ground.

It does this by cooling the smoke down before it gets pumped out, and it’s a great option for creating an atmospheric ground – fx in a horror movie, on the dance floor if you’re a wedding videographer, or creating smoke coming out beneath a door to simulate a fire in the next room.

A great inexpensive option is the ADJ Mister Kool II fog machine which you can find here on Amazon.

You can read more on smoke machines and low foggers and see some great options in the Best Smoke Fog Machine For Your Budget.

You can create low fog with a dry ice machine, but those are heavy and difficult to handle.

Hazers – for creating a thin haze

Whereas a smoke machine creates bursts of thick smoke, a hazer creates a continuous thin mist in a room.

Haze machines are great for adding a delicate atmosphere to, e.g., a fitness shoot, a music video, or even create the illusion of a dusty old room.

The haze is very delicate and thin, and often you can’t see it in the air before you switch on your video lights.

Most hazers use an mineral oil-based fluid as a basis for the particles.

Haze machines have a compressor and a fan that pushes the haze out and disperses it around a room.

The mist from a haze machines stay long in the air

Because of the small particles, the atmospheric fog created from a hazer is less buoyant than air and hangs much longer in the air compared to smoke.

A good hazer will fill up a room once and then you don’t need to switch it on again for another hour or more. For example, the popular (but expensive) Reel EFX DF-50 on Adorama has a fog hang time of over 3 hours.

Hazers create a beautiful atmosphere and are popular, but they are generally more expensive than fog machines.

You can try to create your own haze by putting fans in front of your fog machine. This will dry the fog and disperse it more evenly to make it look more like a haze.

Keep in mind though, that oil based haze can leave an oily residue on things – especially those close the machine. So don’t keep your gear with cooling fans right next to the hazer.

Fazers – The ugly offspring of a smoke machine and a hazer

Because of the popularity – but also price-point – of hazers, some manufacturers produce fake “hazers,” which are really fog machines with internal fans.

A good example of this principle is the Chauvet DJ Hurricane Haze 4D “hazer” on Amazon.

Fazers create a thin smoke, that is usually only visible when you shine your video lights through it.

Fazers use a heating element to heat the water-based fluid, which is then pumped out (like smoke machines). A hazer, on the other hand, uses oil-based fluids and a compressor to create the particles.

So even though the fog you get from fazers is thin, the particles are heavier than the particles from real hazers and will not stay as long in the air.

In the end, you’ll end up using a lot more fluid compared to a hazer, which over time can end up costing you more — and with less great results.

Also, keep in mind that you can’t expect great service on a fazer if something breaks, because of the lower production cost.

The initial cost of a true hazer is higher, but you also get a machine that can be serviced (if you buy from a reputable company), produce better results, and is cheaper to use long term.

Will my fogger/hazer/fazer set off fire alarms?

As far as fire alarms go, whether your smoke machine, hazer, fazer will set off the alarm really depends on what kind of detectors you have.

In general, a low-fogger will be less likely to set off the alarm because the fog stays near the ground.

But it really depends on the system you have.

Will my fogger or hazer affect the color of the light in a scene?

Some foggers and hazers create a particulate (the fog/mist consisting of the particles) that has a slight color cast to it.

This isn’t usually a problem, and it can be used creatively to accentuate things like blue lasers (with a bluish particulate) for instance.

However, it is something to be mindful of when dialing in your lights and white balance. If you want to create a warm scene, having a strong blue particulate demands a bit of extra work.

Is the fog from a smoke machine, hazer, fazer safe to inhale?

Generally it is safe to use smoke machines, hazers, and fazers, as long as you follow the guidelines and don’t get yourself get exposed to huge concentrations of fog.

Most common symptoms include throat and nasal irritation.

[…] there are health effects associated with exposure of Actors to elevated or peak levels of glycol smok and mineral oil. However, as long as peak exposures are avoided, Actors’s health, vocal abilities, and careers should not be harmed.

The report also states, that for smoke machines…

… and the for oil-based haze machines that…

For chronic exposures to mineral oil, the existing standards estabilished for oil mists (5 mg/m3 as an eight-hour time-weighted average) should also be protective for Actors in theatrical production. In addition, the use of mineral oil should be such that Actor’s exposure does not exceed peak concentration of 25 mg/m3.

I urge you to read the report yourself before exposing yourself or anyone else to any atmospheric fog in your video or film production.

If you want to fill a room with a thin and delicate atmosphere for a long, which only becomes visible with your video lights, then a hazer is the way to go.

Hazers are more expensive and bulkier than smoke machines though.

If you want a thicker and more dense atmosphere, a smoke machine is the way to go. And if you want to get a low hanging smoke, you should go with a low-fogger.

I’d stay away from fazers, as they try to do both things, but excel at none.