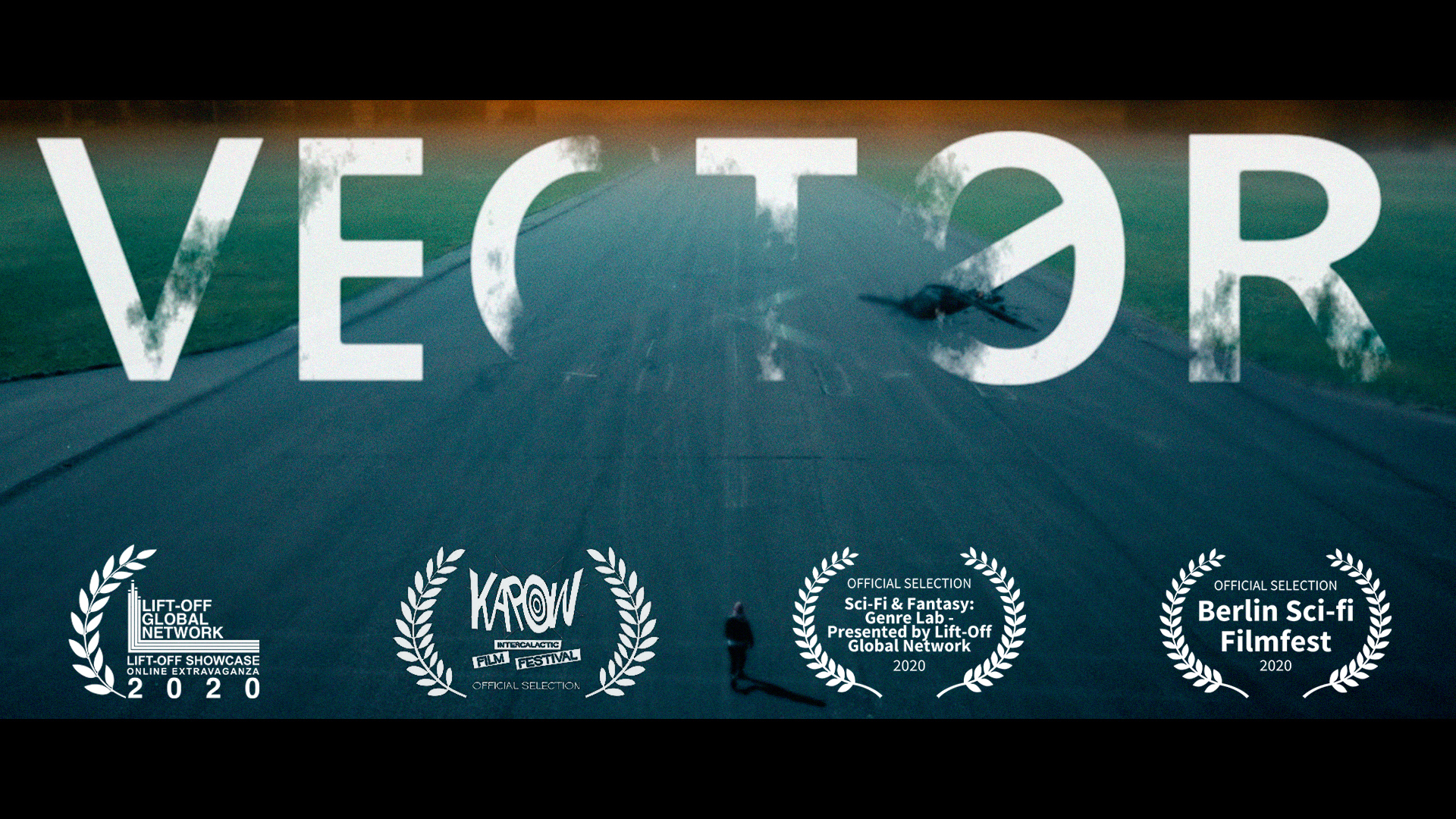 About a year ago, I finished my first short film called VECT0R. And I didn’t really know what to do with it.

You can watch it here:

As old readers might recall, I started this crazy short-film project because I wanted to try out some stuff in After Effects. I’ve covered the whole process here on the site, and you can read the first episode here.

If that’s too much information, here’s a short recap:

VECT0R is a low-budget dystopian sci-fi short film about a pandemic. When I started, I had no idea how much it would come to resemble the reality we’ve all faced the last year.

It was almost scary to see how much of what I had started working on three years ago suddenly got overtaken by reality.

The short features my girlfriend and partner-in-life Maria, who isn’t an actress by profession. So I got her drunk on vodka, stole her away to a desert island on my ship, and told her that she was now the main character in my new movie. – She reluctantly agreed.

I also decided not to put any dialogue in the film. The first reason was that I didn’t know how to write any. The second was that my girlfriend isn’t an actress, and I didn’t want any corny dialogue in Danglish – sorry, hon!

The lack of money and time

As I had no budget for the film, I had to make due with simple props, most of which I found online for cheap.

I also chose to shoot the entire thing with the Panasonic GH5 + the Sigma 18-35 lens because it’s such a versatile bundle. It allowed me to shoot handheld at many useful focal lengths. Coupled with the Metabones Speedbooster it was even useful in low-light situations.

Since Maria and I had a small kid in daycare at the time of production, we often only had a few hours to shoot a scene. So a lot of takes were only done a few times.

Also, there was no time to set up lights. The entire film is mostly shot with natural light – except for a few greenscreen scenes we shot in our apartment when our son had fallen asleep at night.

I did, however, decide to invest some money into getting good sound and good color grading.

Going to the (virtual) film festivals

I then decided to invest some money to see if some sci-film festivals could pick up the film.

And they actually DID!!!

VECT0R got picked up by:

By the way, I reached out to Andrew Straeger, who is the Director of Berlin Sci-Fi Filmfest. Andrew has recently published the book “And Independent Filmmakers Guide To Preparing And Submitting To Film Festivals”.

So I asked Andrew if he was interested in giving some pro tips for submitting a film to festivals for FilmDaft. And luckily, he was. You can read the tips here, where you can also learn more about the book, which I urge you to check out if you want to give your film the best chance at festivals.

Lesson 1: Use filmfreeway.com to apply to film festivals

To be honest, I didn’t know what to expect when it came to film festivals. I’m just a corporate video shoot and explainer video guy by day. And I had no experience in the narrative film scene – nor any knowledge of film festivals.

So I had no idea if my film was good enough to be even considered, nor how to actually get it into a film festival.

So I did some research online and found filmfreeway.com.

Filmfreeway is an amazing online portal for filmmakers who want to go the film festival route.

On the site, you can submit your film to film festivals all over the world from the comfort of your home.

In other words, all the things you need to present your film in the best possible way to the dedicated folks running and selecting the films for their festival.

Get reviews, create a buzz, and share the reviews on Filmfreeway

Speaking of reviews, I also reached out to two sites that did a review of my film. The first was UK Film Review, and the second one was Indieshortsmag.com.

Having some reviews can help your film get picked for festivals – especially if you can get some buzz going. If it did anything to help my film is hard to say.

My guess is probably not – two reviews aren’t much – and it’s definitely not enough to create any sorts of buzz in the blogosphere.

But it’s nice that you can link to reviews directly from Filmfreeway.

Lesson 2: Purchase the subscription if you’re applying to more festivals

Some film festivals are free to enter, but most will cost you some money. You can save some bucks on your application by purchasing a subscription to filmfreeway.com.

In hindsight, I should definitely have signed up for a few months subscription because it actually ended costing me much more applying to the festivals without one.

After having applied for one or two festivals, it would already have been cheaper for me to have the subscription.

Well, you live and learn!

I ended up applying to 13 film festivals in total – a couple of which were some long shots – and VECT0R got picked up by 4 – and one is still undecided and postponed due to the pandemic.

If this is good or bad, I have no idea. But I’m still proud even to have my film picked up. So it doesn’t really matter.

All festivals were held online due to the pandemic. So only virtual red carpets.

Lesson 3: Expect to put in some extra work to meet the needs and standards of the particular festival

Even though you – in theory – can give a film festival access to everything they need on filmfreeway.com, I often got emails with extra things I needed to do.

Fx I needed to upload everything to a Google-Drive-account, convert the film (and/or poster) to a specific aspect ratio, and more.

So you need to be prepared to have some correspondence with the people behind the festivals and create the things they need.

You are often also invited to upload a short pitch where you introduce yourself and your film.

It’s a great way to see the people behind the other films, but I must admit that I didn’t do this myself because I’ve been swarmed with work for clients and moving to a new place, and… and… Excuses, excuses, I know.

This is definitely something I’ll do the next time.

Lesson 4: The quality of the other short films is VERY high

Now, I didn’t get any awards. And I can see why. The quality of the other short films was WAY higher than mine – on all levels!

As stated earlier, I came to this for the experience and didn’t really know what to expect. So when I saw some of the other films, I just wanted to quit filmmaking, get a haircut, and apply for cubicle type of work far away from anything creative.

Many of the films had Hollywood-quality CGI, amazing lighting, a great story, and a great cast!

But… if I were to take a positive spin on this, it would be:

Lesson 5: Get it done! Get it out there! Done is better than perfect, and you might end up learning something!

As someone struggling with getting things perfect my entire life, creating this short film was a great learning experience.

I’ve created music for years, and I have hard disks filled with unfinished tracks, songs, and beats.

I easily doubt my creation, I easily tire of an idea, and I don’t want people to hear or see my work before thinking it is perfect. – Which it never is!

So five years ago or so, I decided to focus on getting things done. Even though things weren’t perfect, I just decided to get things done and get it out there.

And I knew from the start that this film wasn’t going to be perfect. Of course not. I had never done anything like this before.

And that was a refreshing standpoint. It took a lot of the pressure of and just let me experiment with things and have fun! The latter is really important because creating a short film takes a lot of time and effort.

What I will change the next time

I know now that my next short film will have a dialogue. It will be shorter. And I will start with a screenplay the next time – instead of just having some ideas for some scenes with cool effects I want to create.

In other words, I’ll focus on the story and idea first.

I’ve been lucky to have some great screenwriters to write for FilmDaft, who has inspired me to go this route the next time. You can learn more about screenwriting here.

I’ll also make sure to work with lighting setups to create the scenes instead of relying on natural lighting.

I might even try to go the route of trying to crowdfund my next film and try to take this approach.

When and how my next project will start, I don’t know, as I have to find the time.

But I’ll make sure to share the process here for those who might want to read along.

Conclusion (and the last lesson)

I guess there’s an extra lesson here, and that is: use what you have at your disposal!

I had no time, no money, no team, and only a cheap camera (at least compared to the REDs and Alexa Minis others have at their disposal).

But I still managed to create something good enough to get accepted into some festivals worldwide. And I learned a lot from the process, some of which I had never thought of.

Of course, learned a lot of new stuff in After Effects, which was my initial intention.

But I also ended up dipping my toes in the film festival circuit, got to talk to some amazing people, and saw some incredible work done by better and more experienced filmmakers than me.

And that was the real lesson here.

Hopefully, I can create another short film, which can get accepted into some festivals.

And I hope the next time that I will actually be able to travel to some of those festivals (when the world has gone back to “normal”) to meet the other filmmakers in person.

After all, films are meant to be experienced in the theater!