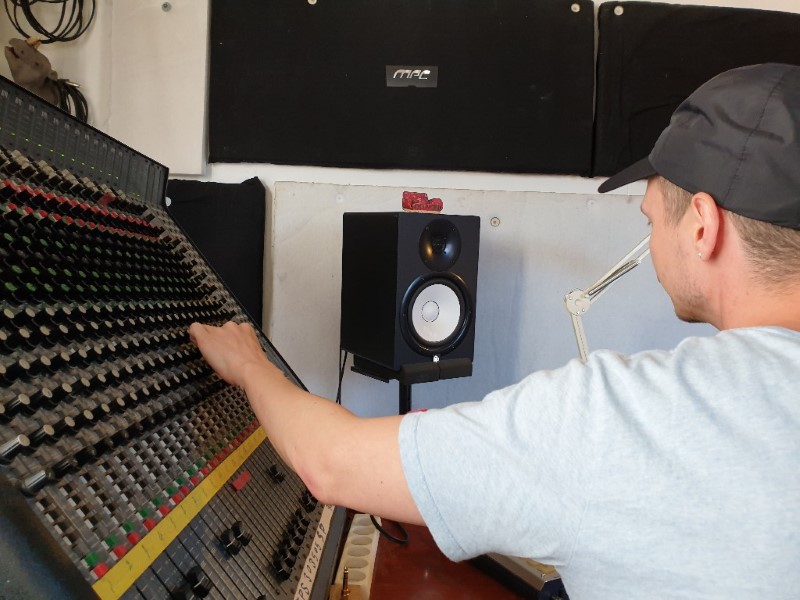 As I was doing the final edit to my short film VECTØR, I was thinking a lot about the next stage, i.e. sound design.

I had already licensed a couple of tracks that I liked that I felt worked very well within the context, but I still felt it needed something more.

So I reached out to Danish sound designer and composer Michael Manky. I had already checked out some of his work, and like what I saw and heard.

You can check out his work at his website michaelmanky.com

So I send him the picture lock of VECTØR and asked him if he was interested in composing something for it.

Michael agreed to give one of the scenes a shot. And he sent over a draft that same evening, which I really liked. He also made some very cool UI-sounds for the augmented reality goggles with in-built AI the protagonist wears in the film.

So I decided to hire him for both things. And luckily, he was up for the challenge.

I LOVE the work he has done and I really feel that Michael has taken the short film to a whole other level. So, now that everything is done, I wanted to hear his thoughts on the whole process.

You can watch and listen to the short film here:

JS: Can you tell us a bit about your background and how you got started working with audio?

MM: Yes, of course. I guess my fascination with sound started very early on.

As a kid, I got an old windows PC from my parents. On the PC there was a very simple sound editing tool which made it possible to sample and record sounds and play around with the pitch/tempo. It had a reverse function as well, but that was pretty much it.

I remember playing with it for hours, just feeding it a bunch of weird game-sounds I found on different CD-Rs. Remember, this was back in the late ’90s, so the possibilities for finding sounds were a bit more limited than they are now.

I got a microphone and started recording stuff around the house, my voice, and basically anything that would make a sound. Even my cat.

From there on out, I was sold on the idea of manipulating sounds, but I had no software to sequence it in. I got into gear, instruments and was introduced to DAWs. From that point on, I started writing music and doing sound designs.

Since then I’ve been working with sound in many different areas. I’ve done some commercials, sound-installations for museums, cartoons, and animations, games, etc. I feel like there’s always new stuff to learn when it comes to sound and I love that there are always new possibilities for bending, modulating, and implementing it.

JS: Do you consider yourself a composer first or a sound designer first and why?

MM: That is a very good question. I think I’m somewhere in between. Both aspects are something I’ve dappled in equally throughout the years.

I’m not saying that I consider it to be the same thing, but sound design can be just as efficient as the actual composition when triggering emotion in movies. It just has to be done right – which is quite the challenge.

JS: What are your inspirations for sound design and composition?

MM: It might sound like the perfect cliche, but I always get inspired when I’m out in nature or going for a walk in the city. There are so many interesting sounds everywhere.

We rarely notice it, but when you listen closely, there’s always a beat or a rhythm going somewhere. Be it a small stream in the woods, a siren, a bike, or the chirps of a bird. It’s also healthy to get out of the studio some times, so it’s a win/win situation, haha. Other than that, movies, games, and music is a big source of inspiration.

I try to learn and take something with me, from all the things I consume.

I always try to watch a movie several times. Once for entertainment, once for listening concentrated to the music and sound design and once more for analyzing. It might sound a bit strange trying to deconstruct a piece of art like that, but it helps me figure out what works and what doesn’t.

JS: Let’s talk about your work on VECTØR. Why the hell did you agree to work on my micro-budget amateur short film? Had you been drinking?

MM: Well, I really liked what I saw, when I initially started watching the draft.

I felt like it would be a good opportunity to try out some different stuff I wouldn’t normally do and I just finished another project at the time, so it was a perfect window of opportunity. I’m glad you reached out!

JS: What were your initial thoughts and ideas when you first saw VECTØR? What came to mind in terms of sound and music?

MM: I guess some sort of sci-fi, dystopian vibe.

There’s a lot of beauty and soul in the cinematography and the initial scene at the hotel gave me this (positive) eerie feeling. Maybe kind of a The Matrix vibe.

I’m a huge fan of the Matrix universe (at least the first movie) so this resonated very well with me. As a composer, you can go in many different directions and completely change the viewers’ perception of what is going on in a specific scene.

To me, this was meant to be a scary scene and I instantly thought about the kind of drone sound and tension, I wanted to add, to manifest that feeling.

I think that’s why I love horror movies so much. Drama as well. Basically, anything that will push you to the end of the seat. Have you ever seen a horror movie without sound? It’s not scary at all. In other words, I believe sound has to power to totally change people’s perception of a film. (Or reality… Da-da-da-daa)

JS: Your initial first draft for a scene, was for the drive-in scene. The cinematography in that scene is inspired by the desert Las Vegas scene from Blade Runner 2049. But your music is nothing like in the Las Vegas scene. Why did you choose to give that scene a shot first, and what was your inspiration for the music in that scene?

MM: I wanted it to sound huge and to have an analog vibe.

JS: When we first talked on the phone I started babbling about my thoughts about each scene. Did you find my ideas were very different from what you saw and had in mind? Why/why not?

MM: First off, it’s very important to me as a composer to “sync up” with the director’s vision. In this example, the film was already pretty much done when I got it and even though it didn’t have any sound yet, it already had a style and vibe to it.

It could take a lot of different directions, but you had some good ideas, inspiration, and references, and based on that, I think we hit a nice spot.

JS: How did you approach the user interface sounds for the goggles? I liked it from the first moment I heard it. What did you want to achieve in terms of sound design?

MM: It was created from some libraries I bought some time ago.

I chopped around 40 different samples, processed them, adjusted the pitch, chopped them some more, and played around with some different stretching algorithms. Then I ran all the designs through my sample chain to add some analog grit.

It was quite time-consuming making everything fit the frames. It took some time fitting it all in, as many of the sounds were based on frames in the film.

Also some granular synthesis was involved, but let’s keep it civil.

JS: Did you find it was difficult to understand what I was looking for in terms of music and sound? Were some of my feedback useful in any way? Feel free to tell me, if I was a pain in the ass to work with. My inner diva can take it – mostly!

MM: I think the process went really smooth, actually. You gave me some good notes and references and I find that knowing what you want but being able to compromise is key, when collaborating.

JS: What was the most difficult part to get right and why?

MM: I think it was challenging creating a bridge between the sadness and realization at the end of the film, where the protagonist (SPOILER ALERT) realizes that the entire world has collapsed and that she is probably the only survivor. In the end, it worked out, but I made several attempts before I felt like it was working ou, but I’m happy with the results.

JS: What gear did you use to create the sound design and music?

MM: I used a bunch of sample libraries, a felt piano, and ran a lot fo the sounds through my sample chain (SP 404 + SP 303) with adds a bit of grittiness and texture to the sounds.

JS: Do you prefer working with hardware or software synths?

MM: I think both offer different possibilities, but the technology we have now allows us to (almost) reproduce the algorithms of very famous (end expensive) synthesizers.

Both have their strengths and weaknesses as for limitations and workflows.

I enjoy working with both, so I really can’t decide.

JS: So what’s up next? Do you have any cool projects you’re working on that you can tell us about?

MM: I just finished up some sound design I’ve been doing for Lyddynastiet on a new danish series called “Cold Hawaii”. It was a lot of fun and I learned a lot from the process. That’s what it’s all about. Besides that, I’m working on some commercials and a small videogame at the moment. Hopefully much more to come in the future!