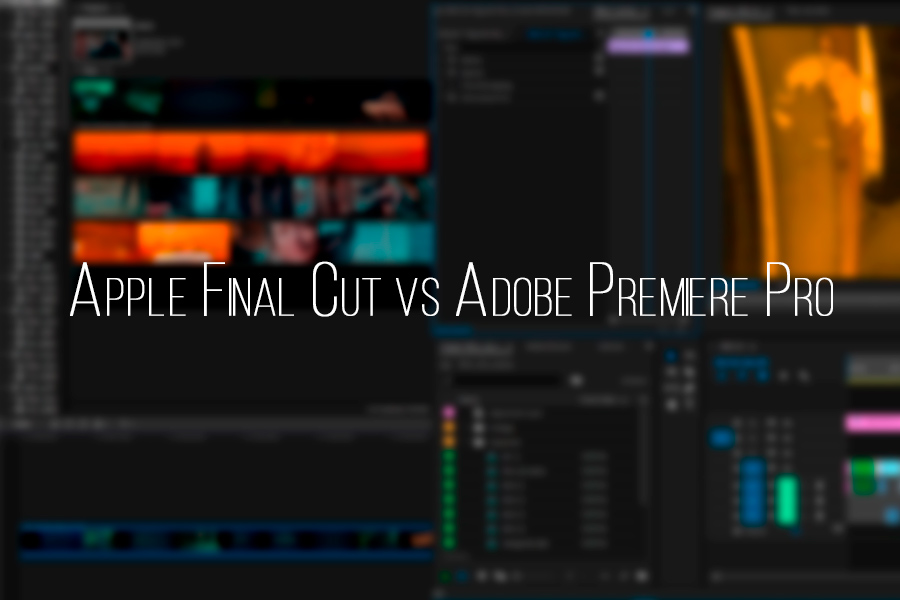 The Apple Final Cut Pro vs. Adobe Premiere Pro bout is a tough one to call.

They dominate the high-end section of the market, overshadowing all other heavyweights. You can hardly go wrong with either one if you seek to cover professional video editing needs.

At the same time, their nuts and bolts differ in some important ways. This can make a big impact on your editing experience and shape the success of the projects. So, take a deep breath and get ready to swallow some hard facts.

First off, we’re going to examine the duo through the lens of ease of use.

Final Cut Pro comes out of the gate strong. It has an incredibly intuitive interface first-time users tend to find welcoming. Everything is where it should be and fits the editing workflow seamlessly.

You spend minimum time trying to locate the desired feature.

Compared to that, Adobe Premiere Pro feels less accessible. In fact, it’s clearly tailored to seasoned editors, not newcomers. We would say this isn’t a bad thing per se.

What it sacrifices on user experience, it gains on other fronts. Finding files is a breeze and layers are clearly separated. Once you get the hang of the menus, it’s a joyride from there.

The takeaway to draw is clear. Apple’s flagship edges it in the first round of the Final cut vs Premiere confrontation. It’s an advanced tool that doesn’t face you with a steep learning curve.

It’s perfectly geared for peak performance on Mac devices. You can expect short exporting and rendering times for all videos. Yes, even those in 4K quality.

The beauty of it is your device will consume little power while doing that too. Just in case, you should check the Final Cut Pro requirements.

Adobe Premiere is considerably slower because it wasn’t designed for one platform. It harnesses whatever resources it can do deliver functionalities. This lack of bespoke quality shows when rendering and editing videos.

That being said, Adobe has now made it possible to take advantage of the GPU on your graphics card. So if you own a NVIDIA graphics card you can now see up to five times faster rendering times in Premiere Pro.

So, provided you have a Mac computer or don’t own a good NVIDIA graphics card, Final Cut Pro wins in terms of performance. Otherwise, you may want to choose Premiere Pro.

Many people are instantly put off or feel restricted by it. Others absolutely love it, go figure. The truth is it works much like a storyline for slapping scenes together.

There is a neat feature that does away with anything that could interfere with the workflow. Connected clips option feature enables you to cycle in different pieces of material.

There are tracks and track heads, and your content is displayed as a sequence. Organizational tools and tabs for different sequences are a treat. The overall level of customization and control is greater, which also makes collaboration easier.

All in all, we prefer Premiere Pro when talking strictly about the timeline and bigger projects. It comes with a wide range of editing features. Final Cut Pro does the trick though when working alone or in a small team.

A Matter of Color Options

Adobe Premiere Pro is superior when it comes to color grading.

The spectrum of options for manipulations is vast and varied. You can easily convey emotions, create eye-popping effects, and making your raw videos come alive.

Lumetri Color tools also support 3D LUTs, which is nice if you want to quickly test out some looks.

As for Final Cut Pro, it isn’t lagging that far behind. Recent versions of Color Wheels have narrowed the gap that used to be quite wide before. Besides, you can add external plugins to expand the range of possibilities.

That said, Final Cut is more suited for simple videos than serious filmmaking and long-format editing for big screens. The latter honor goes to Adobe Premiere.

Adobe Premiere has one other major thing going for it.

We’re talking about a wide array of export presets. They support small smartphone screens, big cinema projectors, and everything in between. So, you can thoroughly optimize your videos to the target audience.

The drawback is everything takes a bit more time and is less intuitive.

Apple’s Final Cut has some good functions for importing. For instance, it’s possible to take a look at your snippets/files before uploading them. This quality of life feature allows you to avoid unnecessary bulk importing.

That being said, Final Cut has some weird stuff going on. For example, if your project doesn’t conform to some very limited aspect ratios your color space end up looking weird, and you have to dive into the submenus and override the color space for everything to appear normal.

Adobe Premiere Pro has a really powerful way of creating proxies when importing, i.e. converting processor-heavy files like 4K, 6K, and 8K resolution video, to a lower-quality file for editing.

This is to say that Premiere Pro is far superior when it comes to importing and exporting footage.

The price tag is seldom the main selling point, but it’s worth bringing up.

After all, two tools involve different pricing schemes. For Final Cut Pro (complete package), you have to bid farewell to $299. And it’s a one-time payment.

Later, you can add plugins as you see fit.

On the other hand, Premiere Pro is a subscription-based service, part of the Adobe Creative Cloud. Monthly subscription separates you from $19.99, which amounts to $239.88 each year.

You may also get Premiere Pro in a full suite of Adobe professional tools.

As you can see, Final Cut Pro turns out to be far less pricey. It costs a bit more than Premiere Pro’s yearly subscription. You pay for it once and are done with it.

Just the way it should be.

They are both remarkable choices for top-notch movie and TV production. Nevertheless, the side-by-side comparison reveals the have their strengths and weaknesses. This is to say they fit different needs and use cases.

When deliberating, focus on core inner workings, crucial aspects that make or break video ending endeavors. Then, consider the type of projects you’re working on and your audience.

You should be able to make an informed decision and avoid buyer’s remorse.