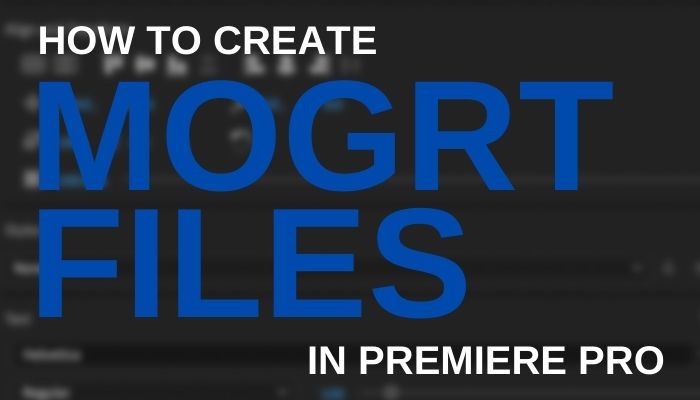 MOGRT files are pre-made motion graphic templates. They are an easy way to add motion graphics to your video projects without the hassle of creating keyframes every time you need to create a new graphic.

While Adobe Premiere comes with some MOGRT included, you’ll often find that you need something entirely else. In that case, you can either purchase one that fits your needs – or make a MORGT yourself.

MOGRT files can be purchased from websites like Storyblocks, Envato, or Motion Array, but you can also create your own using Premiere Pro or After Effects.

After Effects is a more efficient method of creating MOGRT files, but you can also use Premiere if you don’t have After Effects.

This article is an easy tutorial on how you can create MOGRT files in 6 steps using Premiere Pro.

First, let’s learn why we would want to create a MOGRT file.

There are several great benefits to using MOGRT files on your video projects.

The first and most obvious is that it will speed up your workflow. MOGRT files allow you to save the motion graphic as a template that will appear like a piece of media. This is helpful if you use the same motion graphics frequently.

The second benefit is that you can sell MOGRT files you create. MOGRT files are created in the .mogrt format, which allows them to be easily saved and installed on another computer.

You can learn more about importing MOGRT files in this article here.

Websites like Storyblocks, Envato, and Motion Array sell MOGRT files created by other content creators. You could sell the files on one of these platforms or your own personal website as a downloadable file. This is a great way to generate income from files you are already using.

Now we will create a basic MOGRT file that can be saved to Premiere in 6 easy steps:

Step 1: Decide what motion graphic elements to use

First, we must decide what elements to use for the motion graphic.

We will keep this tutorial simple by creating a line of text that enters the frame from the left, stop in the middle for a few seconds, and then exit the frame to the right.

Next, we’re going to create a new text layer. You can do this by hitting the keyboard shortcut (Mac: CMND+T) or (WINDOWS: CONTROL+T).

Type in the text you want. For this example, I will use my name, “Alex Srednoselac” as the line of text.

Now we will change the properties of the text layer.

I like to use Helvetica as my choice of font for most projects, so I will use it here. Last, I will change the size of the text to 150.

This size is large enough where my full name will still fit within the Safe Zone guidelines.

Next, we will center the text horizontally and vertically.

I recommend doing this any time you create an asset, as it is easier to move or undo the positioning later than it is to center the graphic. This will also keep your graphic centered if you change the scaling.

To start, we will center the text line using the paragraph center button in the Text tab. You can see this button circled in red on the photo below. This will center the anchor point of the text, which will prevent you from having to re-center if you make sizing adjustments later.

Click on the vertical and horizontal align buttons under the Align and Transform tab. Both are circled in red in the photo below. This will perfectly center the graphic on the horizontal and vertical axis.

Note that you can also use this option to center the graphic again after changing the positioning.

Next, let’s add motion to this graphic. The default duration for a graphic in Premiere is 5 seconds. You can change the duration to any length of time, but we will keep it at 5 seconds for this tutorial.

First, we will add a position keyframe near the beginning and end of the graphic. This will lock our graphic into place for a few seconds before and after the graphic enters and exits the screen. I want the graphic to hold still for 3 seconds, so we will add a keyframe at 1 and 4 seconds.

You can quickly move the Playhead to 1 second by typing in “+100” on the Playhead Position box pictured below.

You can then type “+300” on the Playhead Position to move the Playhead to the 4-second position. Place another keyframe by hitting the diamond icon pictured below on the Position tab.

Now the graphic will not move for 3 seconds.

First, place the Playhead at the beginning of the clip by hitting the up arrow on your keyboard. In the Effects Controls tab, drag the X position to the left until the graphic disappears off-screen. This will automatically create a keyframe for this position since we hit the clock icon earlier.

Perform the same task on the last frame of the graphic. Hit the down arrow on your keyboard to move the Playhead to the last frame.

In the Effects Controls tab, drag the X position to the right until the graphic disappears off-screen. Premiere will automatically add another keyframe for this movement. The motion graphic is now complete.

Step 6: Save the graphic as a MOGRT file.

The last step is to save our new motion graphic as a MOGRT file. Right-click the text layer on the timeline and click “Export As Motion Graphic Template….”

A window will appear where you can name the MOGRT file, change the file destination, etc.

For simplicity, keep the file Destination in the Local Templates Folder. This is where all pre-installed MOGRT files are stored and will make it easier to find later.

You can change this if you are a more advanced user.

Your graphic should appear with the other pre-installed MOGRT files, but you can also search for it if you cannot find its location.

This tutorial is a simple explanation of how to create a MOGRT file. You can add other motion, backgrounds, and more to these files, but it’s important to learn the basics first.

MOGRT files are a great way to simplify your motion graphics workflow inside of Premiere.

If you got any questions, let us know in the comments below.