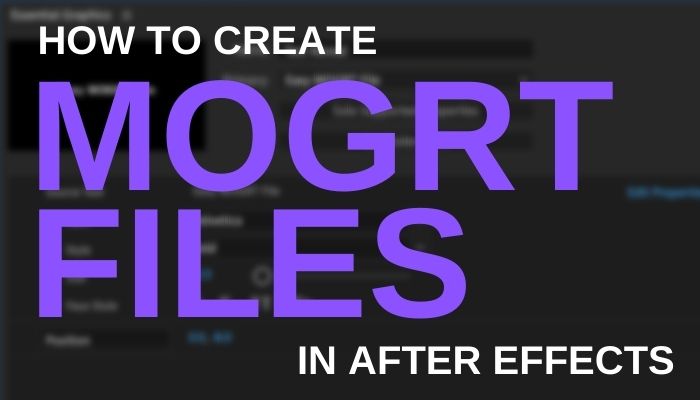 MOGRT files are pre-made motion graphic templates. They are an easy way to add motion graphics to your video projects without the hassle of creating keyframes every time you need a new graphic with motion.

The biggest benefit of using MOGRT files is it will speed up your workflow. Creating graphics can be a tedious task, but even more so when you have to create multiple versions of the same graphic.

MOGRT files allow the editor to make one motion graphic that can be reused and changed with a few minor adjustments.

Another great benefit is that you can take your MOGRT files and sell them on other platforms. MOGRT files are exported in the .mogrt file format that can be easily downloaded and installed on another machine.

You can sell MOGRT files on places like Storyblocks, Envato Elements, Motion Array, and more. You can even sell them on your own personal website or store. This can be a great way to make passive income with graphics you already use.

See this article here about how MOGRT files can be imported and installed on another machine.

MOGRT files can be created in both Adobe Premiere and After Effects. This article will be an illustrated guide on how to create these files in After Effects. After Effects allows you to create more advanced motion graphics, whereas Premiere has some limitations.

See this article here about creating a MOGRT file in Adobe Premiere if you need to create something simple.

Let’s now learn about how to create a MOGRT file in After Effects in nine easy steps:

1: Decide on a motion graphic

The first step we need to do is decide what we want to happen on our MOGRT file. Typically, the most common assets used in a MOGRT file are text and shape layers. Some examples of motion graphics could include the following:

There are plenty more uses for motion graphics, but these are some of the most common.

You don’t want to overwhelm yourself in the beginning. I believe the best way to learn is with a simple motion graphic that we can replicate. We will use the graphic below for this tutorial.

The text appears from behind a mask, holds for a few frames, and then falls down back behind the mask. This gives the text an “appearing out of thin air” look.

Looking at the image below, you can see this motion graphic uses a line of text, a shape layer for the mask, and then a null layer to tie the previous two elements together. I used Helvetica for this graphic, but feel free to use any font.

The line of text moves up from behind the mask, holds for a few seconds, and then moves back down behind the mask using keyframes. Note that keyframes are only used on the text layer.

We can now begin recreating the motion graphic from scratch using the same elements.

Go ahead and open a new project in After Effects. Then, create a new composition by hitting the keyboard shortcut (Mac: CMD+N) or (Windows: CONTROL+N). A pop-up will appear for the composition settings.

Feel free to use whatever settings you would like, or you can copy the settings I used above. I am using a standard 1080p setup at 23.976 frames per second.

You can create a new text layer under LAYER > NEW > TEXT. An empty text layer should appear in the Layers Panel.

Now type anything on the text layer. I will type “Easy MOGRT File” for this tutorial. You can also change any of the text characteristics under the Character Tab. I am using Helvetica bold and 113 pixels.

You’ll notice the mouse cursor looks different. We will need to draw our shape layer. We want to create a rectangle large enough to cover all of the text on the screen.

However, I am going to create a shape layer large enough to account for more text if we decide to use this MOGRT file in the future. Take your cursor and click and drag until you create a rectangle.

A colored shape should appear after you let go of the curser. Don’t worry about the color of the shape. We will address this later.

Now we need to add an alpha channel to the text layer so the shape will act as an invisible wall.  You will need to turn on the Layer Switch Pane.

You can do this by hitting the button on the bottom left of the After Effects window or hitting the “Toggle Switches/Modes” button. Both are circled in red below.

A dropdown menu should then appear in the TrkMat column on the Layer Panel. Select Alpha Inverted Matte “Shape Layer 1.” Note that your shape layer must be above the text layer on the Layer Panel for this to work properly.

This step is optional, but it’s helpful if you want to move both of these layers simultaneously without damaging what we’ve created. You can skip to the next section if you do not want to complete this step.

A null object is an invisible layer that other layers can attach to. As mentioned, this is useful when you need to move or resize multiple layers without having to do it individually.

We are going to parent both the text and shape layers to the null object. We do this by hitting each of the dropdown menus under the Parent & Link column in the Layer Panel.

Select “Null Object #” for both layers. You will notice that the text in the dropdown menus will match what was just selected.

We are going to set keyframes on the Y position so the graphic will move up and down.

The graphic is currently placed in the position where we want it to appear, so we will place this keyframe first.

I want the graphic to appear after half a second. We can move the playhead half a second manually with the curser, or by typing +12 on the Playhead Position box pictured below.

Note this number may be different depending on the framerate you chose while setting up the composition earlier.

Next, let’s move the playhead back to the beginning of the sequence to place the next keyframe.

You can place the playhead manually, or type 0 in the Playhead Position box.

Then move the Y position down on the text layer Position until the text is under the shape layer. Note another keyframe will be automatically placed.

Repeat these steps at the end of the composition so the text disappears behind the shape layer.

The motion graphic is now complete. Now we will setup the MOGRT file.

You will need the Essential Graphics Panel pulled up if you did not do so earlier in this tutorial. It will be a window like in the photo below.

First, name the MOGRT file. I would name it something easy to reference later, such as what happens in the graphic. For example, you can name this “Text Reveal.”

Next, Primary is about the composition. The composition we initially created should automatically show up here since it’s the only one on the Ae project.

Now we can start adding customizable properties to the MOGRT file. We are going to keep it simple for this tutorial, but feel free to play around as you follow this guide.

Hit the Solo Supported Properties button. This will open all available properties on the Layer Panel for every layer in the composition. We will only need to focus on the text layer, as the mask will automatically be added to the MOGRT file.

You now need to decide which properties you want available to edit later when the MOGRT file is imported into Premiere.

For instance, we can make it so the user can adjust the size of the text. You can do this by dragging and dropping Position from the text layer to the Essential Graphics Panel. First, click and hold the Position under the transform tab on the text layer. It’s circled in red below.

This is just one of many elements you can add to your MOGRT file. Let’s add the ability to change the text properties. Under the Text tab in the text layer, drag “Source Text” to the Essential Graphics Panel. Notice there is an “Edit Properties” button on the right side when the Source Text is added.

A popup will appear when this button is click. Check off all of the boxes on the upper half of the popup window pictured below.

This will then allow the user to change multiple properties of the text.

Play around adding different properties so you can see what is possible. For this tutorial we will stick with the Source Text and Position, but feel free to add as many as desired.

The “Set Poster Time” button will create a display image for your MOGRT file. You can set this yourself, or use what is automatically set.

The last step will be to export the MOGRT file.

Click on the “Export Motion Graphics Template…” button on the lower right corner of the Essential Graphics Panel. After Effects will prompt the project to be saved.

A new popup will appear after the project is saved. This is where you will set the save destination of the MOGRT file.

I would recommend keeping all of your MOGRT files in Adobe’s “Local Templates Folder,” but you can save them to any preferred folder. You can also add keywords for easy search later.

Hit “Okay” once you are satisfied.

That’s it. The MOGRT file is created. The file will automatically appear inside or Premiere if you saved it in the Local Templates Folder, but you can learn how to import the file here if you saved to a different folder.

Head off into Premiere and check out your new motion graphics template.

MOGRT files are a great way to add motion graphics to your projects without the hassle of having to recreate it over and over. You can also add shapes, colors, etc, so you’re not just limited to text.

MOGRT files can be created in both Premiere and After Effects. However, you can add more customization creating inside of After Effects. Practice makes perfect, so I would create a bunch of different graphics until you are comfortable.

You can also find other pre-made graphics from places like Storyblocks, Envato Elements, and Motion Array. Pre-made graphics can be a great tool when learning how to create MOGRT files.