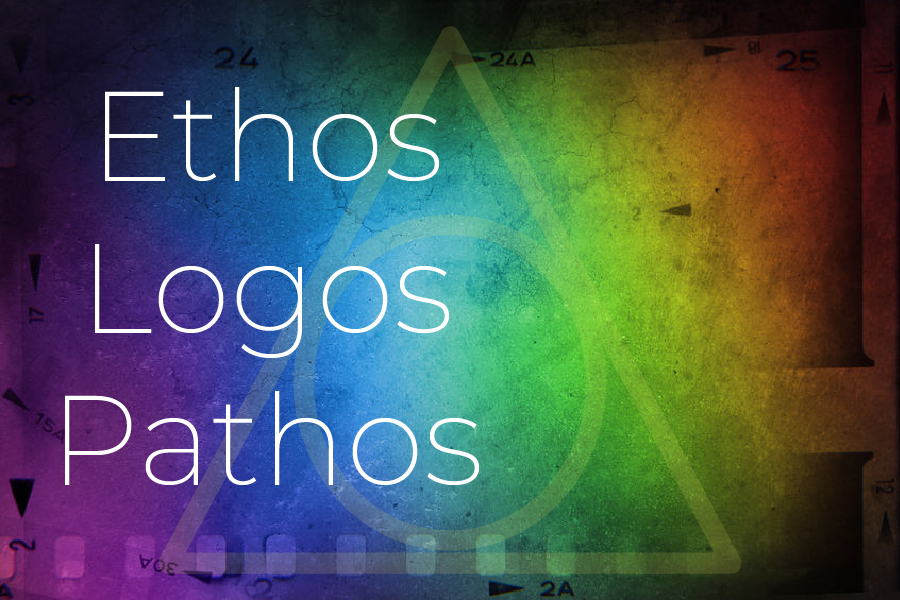 Usually, it’s because there’s some memorable moment, dialogue, character, or message behind them that makes them persuasive.

Ethos, logos, and pathos are terms coined by the ancient philosopher Aristotle to define the rhetorical strategies storytellers use to appeal to and persuade an audience of a particular argument. Ethos, logos, and pathos are used to compel an audience to suspend their disbelief and invest their emotions into the world of the characters, as well as convince them into an important moral or ethical argument.

In this four-part series, we discuss and share the many ways to use logos, ethos, and pathos to persuade an audience with our stories.

After reading this series of articles, you will learn how to use logos to create a plot that follows a logically consistent course, ethos to build a story world with a beating moral heart, and pathos to compel genuine emotional connections to characters, all to teach your audience a universal truth about our shared humanity.

But first: why persuade an audience with our storytelling in the first place?

The origins of film storytelling are persuasive oral stories

Oral storytelling, what you might think of now as campfire tales, is the original screenplay.

Oral storytelling began as important lessons told by elders to be passed down to the next generation to teach the youth something important. Whether they were lessons about survival, family traditions, or silly cautionary tales to teach and entertain the kids, the act of telling stories was first and foremost to teach others. Teaching, at its core, is all about persuasion.

Today’s big-budget Hollywood storytelling exists mostly to entertain the masses, but even the most basic action-adventure stories have important lessons to be learned. Just like the tradition of oral storytelling, film storytelling is also intended to teach us lessons about life.

As I’ve shared in how to write a screenplay that works, as your character goes through their Hero’s journey, they are supposed to learn an important lesson in order to change and achieve their goal.

The lesson at hand is also for the audience to learn, even if it’s one that might be obvious to most. In this way, story structure has persuasion built into its bones.

Why is persuasion important to storytelling?

Persuasion is the act of convincing someone of a particular point of view, compelling a particular opinion, belief, intention, or action to change.

In order to be successful at storytelling, the storyteller must persuade the audience that the lesson the character is supposed to learn is important. That’s why no matter what you are writing, you need to have some type of message behind your story.

Even if it’s a comedy, there has to be some central dramatic question about the human condition driving the narrative and leading the characters towards learning an all important message.

Convince the viewers why your message is important

You should be able to argue why your message is important, while also understanding the counterarguments against it. In a story, you should be able to make a compelling case against why the character shouldn’t change – then make a better argument for their need to change.

Once you have a sense of why your character needs to change, the rest of the story is all about how they come to the conclusion to change. In a way, the entire story should be in service of this change.

Every plot mechanic, every character, every line of dialogue and action taken should be in service of this arc of the character, leading them ever forward to their ultimate decision to change. This is where logos, ethos, and pathos come into play.

What are Logos, ethos, and pathos?

Logos, ethos, and pathos are rhetorical tools you can use to tell more compelling stories. They are also known as the three rhetorical appeals or the three modes of persuasion.

They are the levers good storytellers use to win over the audience, activate their imagination, and pull on their heartstrings.

Ethos is what Aristotle referred to as an appeal to credibility or authority.

When you use ethos, i.e., make an ethical appeal, you seek to establish credibility either by your knowledge of a particular subject (extrinsic) or by the way you present your persuasive argument (intrinsic).

It’s how you, as the presenter, convince your listeners you are qualified to speak on a subject.

In film, ethos can be used to measure how well your film convinces your audience of the story’s credibility. Ethos can look differently depending on how it’s applied, which we’ll cover.

Ethos can also manifest itself as a trait that is dominant in a particular character. Other characters might have other dominant traits, and when these dominant traits interact in a story, you create the roots for conflict, harmony, and attraction.

A quick example of a character that possesses ethos is Harry Potter, i.e., he is the offspring of powerful wizard parents, which helps establish his credibility as a powerful wizard himself from the very beginning of the story.

Check out the Best Inspirational Quotes from Harry Potter.

Logos is what Aristotle referred to as an appeal to a listener’s logical reasoning, usually by incorporating supporting facts and figures to back up the claim.

Thus a logical appeal appeal to logic through the persuasive use of reasoning in your argument.

In film, logos is the presence of story logic. Story logic connects each beat of the story to flow naturally to the next, so the viewer can draw their own conclusions and determine that everything makes sense according to the world of the story, which we’ll cover.

Harry’s friend Hermione Granger in Harry Potter is a good example of a character, which embodies logos. She’s the brains and the perfect student, and she approaches magic with logic and reason.

Pathos is what Aristotle referred to as an appeal to the audience’s emotions – or passions – from love to hate and from fear to security.

As a presenter, you can use different rhetorical techniques like word choice, metaphors, or even the level of passion in your delivery to appeal to the listener’s emotions.

In the case of film, pathos is a measure of how your film persuades the audience to invest their emotions in the story’s world. There are many ways to do this, which we’ll cover.

Harry’s friend Ron Weasley in Harry Potter embodies pathos in their friendship triangle. He is passionate and always there for Harry, he is funny, brave, insecure, immature, and jealous. His love and feelings for Hermione are often not mirrored by Hermione, who is both more mature and rational.

How do you use Ethos, Logos and Pathos in storytelling?

By following the concepts of logos, ethos, and pathos, you should be able to weave them into your writing to tell more compelling stories.

To learn about Ethos first, jump over to our second part in the series, “How to use Ethos in your next short film.”

2 thoughts on “How To Use Ethos, Logos, And Pathos In Film (With Examples). Part 1.”