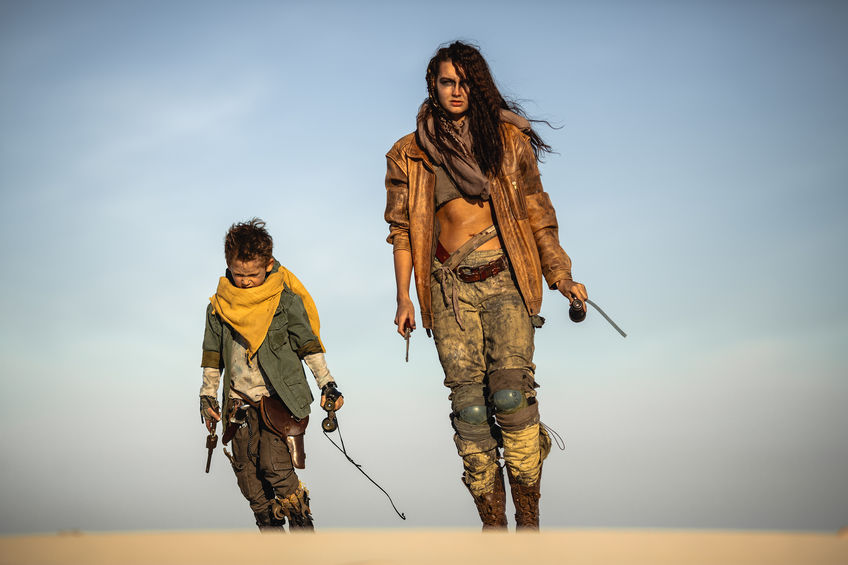 There are a lot of ways to come up with characters when you’re writing a screenplay. Some may be inspired by people you know or yourself, and other times these characters will be fictional.

So what exactly is a character biography in a movie?

At its most basic form, a character bio is a few sentences or paragraphs that describe your character and their story. A good biography can serve as a manual for understanding the actions of this person throughout the screenplay.

Depending on the prominence of the character you’re describing, the biography can be as short or as long as you’d like.

That said, it never hurts to overthink any of your characters’ histories. This is a great way to build out the world you’re creating, and you may surprise yourself with what you come up with.

So let’s dive into creating compelling character bios for your film. Later you’ll also find a downloadable pdf template, where all you have to do is fill in the blanks.

There are a lot of reasons you might want to make short biographies for your characters. From simply inspiring yourself to start writing to uncovering new depths of your story, these bios are important things to lean on throughout the process.

First and foremost, character bios help ensure that you have compelling, properly motivated, and consistent characters. A frequent problem bad scripts encounter is a lack of consistency. Motivations may flip without reason, the tone of a character may suddenly change, or the character might not make sense to the reader.

Even if you are writing a script inspired by real people, it’s important to make a bio that helps you remember their background, arc, and reasons for their decision-making.

Outside of simply helping you develop character, making these bios before starting your script can help with world-building. If you’re writing a fictional script, writing out characters’ backgrounds and stories may help you find shared histories, relationships, and new locations to share.

In a non-fiction script, doing this can make clear certain parallels in the story. This could help to structure your story in terms of pacing as well as scene transitions. It could also help you realize what is important to include in the screenplay versus what might be interesting but unnecessary.

What Goes In A Character Bio

Any character you create has the capacity to be complex. Even side characters can have full biographies, and doing this (though not always needed) may open you up to new ideas.

In your bio, there will be some givens. Your character’s name, relationship to the story, and motivation/goal are hugely important. However, this is not all that can be said.

It helps to think about what their background is. Where did they grow up? What is their socio-economic background? How does their personality manifest itself to people around them, and does that differ from how they truly feel?

Other important things to note are relationships to other characters, significant others, work and home life, how they make decisions, morals and ethics.

The number of questions you could ask is limitless, and a lot of this stems from the story you’re trying to tell and their relation to that. Therefore it is also important to include the character’s arc. Will they change over the course of the story? Is that change going to be external, internal, positive, or negative?

Since all these questions can get overwhelming, it helps to think about archetypes and ways we define character traits in the real world. After all, these character bios should help make the writing process easier, not get in the way.

Tips And Tricks For Great Characters

A good way to avoid spending too much time on bios and getting overwhelmed is to use archetypes and ways of describing character traits that come up in the real world.

Obviously, you shouldn’t adhere to these too strongly to avoid cliches, but they help fill in some gaps when you don’t want to think about everything.

In my writing, I like to think about what the characters’ astrological signs would be. There are often many unique details included in these charts that can bring out some interesting and specific traits.

Similar to this, the Myers-Briggs personality test gives detailed descriptions of a variety of personality traits. If you’re looking to explore your character’s psyche, this is a great thing to look into.

Other fun methods can come from a variety of popular media. If you’ve ever played role-playing games like Dungeons and Dragons, you can use the alignment system. Is your character lawful good, chaotic evil, or somewhere in between?

Or what house in Harry Potter would your character be a part of?

All of these are quick ways to give your character a guiding philosophy, strong personality, and extra detail that can help whenever you find yourself asking, “what should this person do?”

There are plenty of templates out there for making character bios, ranging from something as simple as a few sentences describing essential traits to full-on graphics exploring a character’s inner complexities.

If you’re looking for something unique, a quick google search can provide you with plenty of ideas.

A fun way to create a character bio that I’ve used in the past is the Film Crit Hulk Character Tree. This asks seven tough questions matched to physical body parts that help to clarify your character’s motivation and worldview.

If you intend to use character bios in a film treatment or pitch, it helps to keep things as simple as possible, though. Below is an example and template of a character bio format I have used on my own projects in the past.

Template For A Character Bio

Relationship/Role: The protagonist, a daughter, a granddaughter, a student

Background: Ellie Browning was born in Salem, Oregon, in 1999. She has lived there her whole life but dreams of leaving. Ellie’s mother, Jackie, disappeared in 2004 when she was five years old, and Ellie has lived with her Grandma Rose ever since. Their house is modest. Rose was an art teacher before she retired, which translated to Ellie’s passions. She frequently draws, hikes, and explores the woods nearby. She has been obsessed with why her mother left since she was five, which is the subject of most of her art.

Goal: Ellie has two main physical goals; to get out of Salem and to reunite with her mother. Emotionally Ellie is lonely, and though she won’t admit it, she is also searching for a friend.

You can download an empty version of the movie character bio template here for free. All you need to do is fill in the blanks:

Sometimes people like to separate likes and dislikes from the background. Other folks like to focus on more physical characteristics.

Oftentimes a character bio will be presented along with a film treatment, logline, or synopsis of the story itself. If not, you may want more detail on the story as you send it out, but ultimately the structure and level of depth are up to you!

Character bios are flexible and depend as much on the character and story as they do you as the writer. It’s important to ask yourself pressing questions and allow those to guide the screenplay you’ll write.

If you ever find yourself struggling to get through a portion of your script, having bios for all your characters can give you enough information to push through to the end. Having detailed backgrounds is also a great way to surprise yourself with new ideas.

It’s hard to go wrong with making bios. Just be sure that you don’t burn yourself out. It’s also great to experiment with templates and formats, so if you haven’t done a bio before, be sure to do some research and get creative.

Ultimately, the main goal of a character biography is to inspire you to write the best screenplay you can!

Have you made many character bios before? Are there certain traits and details you like to include that we forgot above? Let us know in the comments below and good luck with your next writing project!