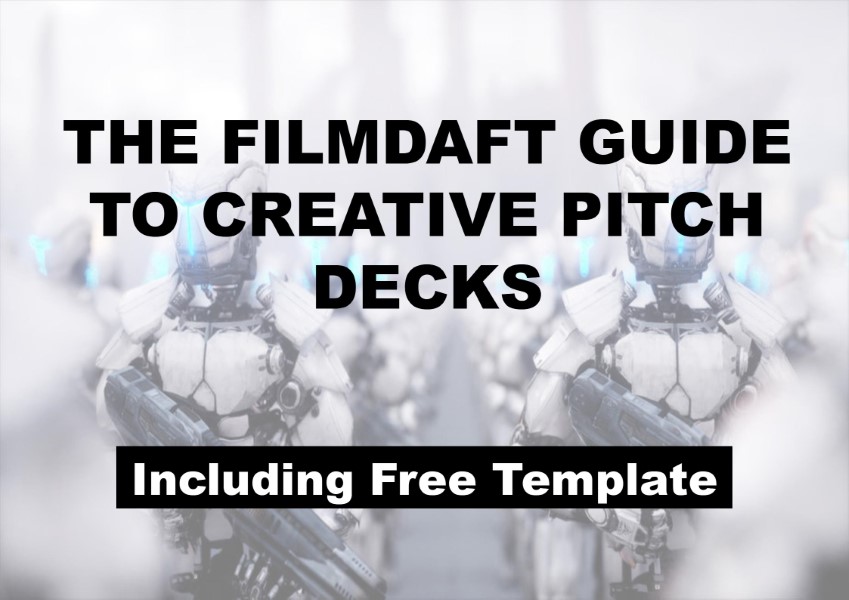 Chances are, if you’re a filmmaker, you have plenty of ideas you want to be made into a movie. However, getting funding behind your projects and collaborators attached can be extremely difficult.

Even if you’re looking to sell an idea, it can be difficult to illustrate to others the concept you believe in. This is where having a creative deck comes in hand.

So what is a creative pitch deck?

Essentially a creative deck is a slideshow, or presentation, that serves as a mood board and illustrates the basic story of your idea.

Creative decks are used for various media ideas, from movies to television, even podcasts.

If you have a meeting with a producer, actors, or any potential collaborators, this is a great way to show how serious you are about your idea and get them excited.

Oftentimes, creative decks are shared outside of in-person meetings.

They can serve a similar function to film treatments (you can read how to write film treatments here) as a first look to interest people and, due to their visual nature, often are more effective at catching attention.

Now, if you’ve never heard of creative decks, don’t worry. This article will go over the basic ideas behind how to make a great creative deck.

Keep in mind that this should be a creative process, just like writing, and sometimes it helps to break the rules if it helps get the point across.

What Is In A Pitch Deck?

A creative deck includes a title page, an overview of the story, an introduction of the main characters, and oftentimes a slide at the end, illustrating the next steps or selling why this idea matters.

Creative decks shouldn’t be exhaustive. Typically they are around 10 slides. Going over 15 slides really runs the risk of being too long, so be cautious.

Keep in mind that your overview shouldn’t be too long. A lot of the time, it can be done in one to three slides. As for character slides, you don’t need every single character. Limit it to the main protagonists and antagonists.

Finally, decks should be a visual experience. Carefully select photos that convey the mood you’re trying to get across. Long blocks of text will get in the way of these photos as well, so be cautious. Pictures, in this case, really are worth more than words.

When To Use A Pitch Deck?

As discussed in the introduction, there are many different times that you can use a creative deck.

The first and most obvious is when you are pitching ideas in person. If you are an indie filmmaker, this can even be used when pitching an idea to your friends and peers.

If you need to secure funding or help in any way, having a creative deck helps get people on board. However, there are many other uses for this as well. Many times creative decks are sent via email as a first look at an idea.

Decks can also be sent alongside treatments or scripts. While it is always risky to send unsolicited material if you have a script requested and a creative deck to go along with it, that can help get the reader more excited.

Finally, if you have a high concept story, such as something fantasy or sci-fi, a creative deck is hugely important in conveying tone.

Sometimes at first glance, it can be difficult to ascertain who the audience is for certain ideas, whether it’s a comedy or drama, or if it’s grounded or more imaginative.

Still, if you include pictures to accompany it, those questions most likely will be answered at first glance.

How To Make A Pitch Deck

There are many different ways to make a pitch deck, and it can be as simple or complicated as you need.

I started making decks in college using PowerPoint. That’s a straightforward program, but you can still get a lot done with it.

The images in this article are all from an example pitch deck made in Powerpoint. You can download and use the PowerPoint template here for free:

Honestly, it’s better to be simple than to complicate things overly. The best thing you can do is be consistent. If your deck looks like a mess, people will think your idea is too.

As I’ve made an increasing number of decks, I’ve started using Adobe Photoshop and InDesign.

Depending on your circumstances, adding lighting, shadows, and other effects can be what’s needed to set your idea apart.

It certainly isn’t necessary and will hurt your pitch if done poorly, yet attention to detail is always appreciated and shows that you take your idea seriously.

Some more important notes are to try and include your logline. Having this on the first or second slide will get your concept recognized quickly.

Don’t try to hold off important information for a reveal.

Right now, you’re trying to sell yourself, so make it as interesting as possible from the get-go.

Pay attention to the characters and actors

Additionally, be careful about how you describe your characters. It can help to have pictures of actors and characters from other movies that fill a similar role. That said, don’t expect to have an actor.

Make it diverse so that there are plenty of options. Especially if you pitch to a studio, you don’t know people’s relationships, and it may not be a great idea to be hung up on one actor.

Even if you’re an indie filmmaker and can’t get well-known actors, having well-known faces to communicate a certain type is very effective and can excite potential financiers.

I’ve seen a lot of creative decks that have missed the mark for a variety of reasons.

The most common mistake people make is to include massive blocks of text. In some instances, this is okay for the story overview, but it shouldn’t be difficult to read.

If your deck looks like your treatment and is just as wordy, then it’s pretty much pointless.

Try to make it as concise as possible. It should be exciting and engaging, and if there are any questions, you can answer them later.

Make it easy on the eyes!

Another problem that comes up is simple things that make presentations hard to look at. Pick readable fonts over “fun” fonts. If you’re doing a sci-fi film, a sans serif font is great, but don’t try to do the whole thing in blade runner text.

Also, be careful about how your images and text are aligned. The eye shouldn’t be jumping around, and there should be consistency between slides.

Borders on images can be beneficial to keep things organized. Making sure your text blocks are somewhat similar in size between slides is also useful.

Finally, make sure it’s readable. I often put an image in the background of each slide. To make text legible, I frequently darken the image or put a drop shadow on the text.

Colors like white, yellow, or black are often the most readable colors. If need be, put your text over a solid color background.

Things To Keep In Mind While Pitching

When you’re presenting your deck, it’s a pitch. You will be selling people on your film, so it’s important to illustrate how much you care about your idea. To do this, utilize common presenting tactics to make things interesting.

Don’t read exactly what’s on your deck. You will most likely be giving, or have already given, your audience a copy. So make it more personal. Go a bit off the book and make it sound natural. It can also help to ask questions and engage the audience.

Another way to keep the audience engaged is to draw parallels. Just like how it’s useful to have recognizable actors on your character slides, it can be handy to give some well-known examples of films that fill a similar genre as yours.

That said, the most important thing is to make sure you communicate why your film is unique and necessary. Doing so is a very effective way to end a pitch.

I hope that clears up what a creative deck is and how it can be used. There are many different ways to make them, and a lot of it depends on the scope of the project and personal preference.

In my experience, the tactics listed above have been the most effective at getting positive feedback. If you’re starting in the industry, designing good creative decks is a huge selling point if you’re looking for assistant work also.

There are so many different uses for a creative deck, and I would strongly recommend making one for every script or idea you intend to share.

In fact, making these can help clear up your idea and the tone for yourself. It’s a great creative exercise, and after you make a couple, it starts to get quite easy.

Have you already made creative decks? Are you inspired to start? Let us know in the comment section below, and good luck with your pitching!