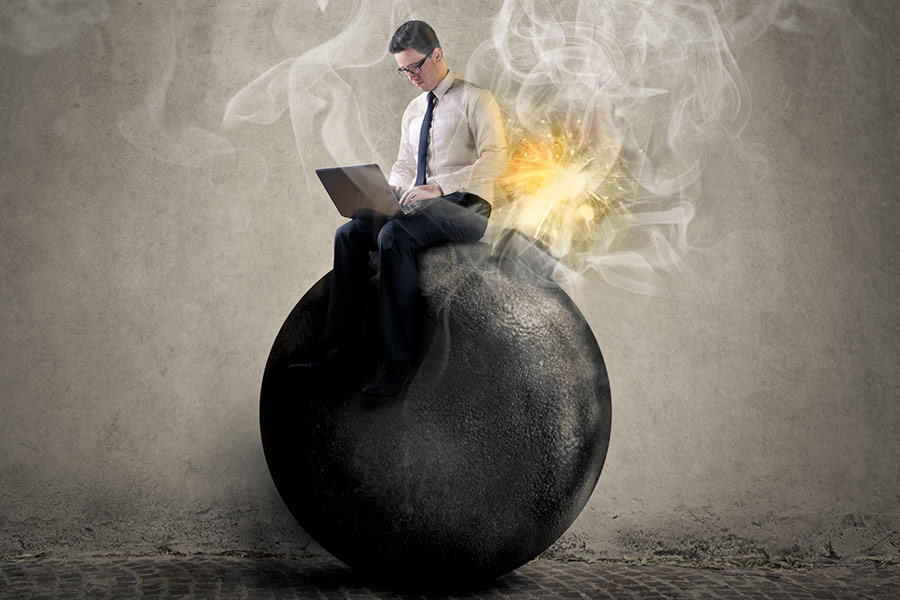 This is the second article in the short series ‘The Three Types Of Irony and How To Use Them In Film‘. You can read the first one here.

In this second article, we’ll take a more in-depth look at dramatic irony in film, and how you can apply it in your screenwriting.

But to understand how best to use dramatic irony in your storytelling, we need to start somewhere else. I.e. we need to establish the difference between creating suspense and creating surprise.

What’s the difference between suspense and surprise?

Surprise is the feeling we get when something happens to the characters we weren’t expecting.

Suspense is the feeling of anxiousness we get when we know something the characters don’t and are on the edge of our seats worried for them – usually through using dramatic irony.

When a storyteller can keep the audience focused on what comes next, they create an environment where it becomes nearly impossible for the audience to look away.

Surprise is an immediate feeling, it happens suddenly and is over quickly. Once a surprise occurs, the dramatic tension of the moment dissipates just as suddenly as the surprise.

Suspense, meanwhile, is the fuel that builds dramatic tension over time. The more we begin to worry about and dread a particular outcome for our characters, the more invested we become in the dramatic tension.

The Difference between Surprise and Suspense as explained by Alfred Hitchcock

Alfred Hitchcock explains it perfectly in this quote:

“Let’s suppose that there is a bomb underneath this table between us. Nothing happens, and then all of a sudden, “Boom!” There is an explosion. The public is surprised, but prior to this surprise, it has seen an absolutely ordinary scene, of no special consequence.

Now, let us take a suspense situation. The bomb is underneath the table and the public knows it, probably because they have seen the anarchist place it there. The public is aware the bomb is going to explode at one o’clock and there is a clock in the decor. The public can see that it is a quarter to one.

In these conditions, the same innocuous conversation becomes fascinating because the public is participating in the scene. The audience is longing to warn the characters on the screen: “You shouldn’t be talking about such trivial matters. There is a bomb beneath you and it is about to explode!”

In the first case we have given the public fifteen seconds of surprise at the moment of the explosion. In the second we have provided them with fifteen minutes of suspense. The conclusion is that whenever possible the public must be informed. Except when the surprise is a twist, that is, when the unexpected ending is, in itself, the highlight of the story.”

Now, how do you create suspense with dramatic irony?

You must first reveal information to the audience before you reveal it to the characters. To do this, you must consider whose point of view you are using to tell this story.

Are we experiencing the story through one character’s point of view aka first person perspective?

Are there multiple point-of-view characters interacting together?

Or are you telling the story from a third-person omniscient point of view, where you bounce from scene to scene and character to character?

If you are trying to create dramatic irony while telling the story from the first-person point of view, you will have to use subtle clues hidden in the scenes that the audience sees but the lead character doesn’t.

Think about a missed call on an answering machine that our character doesn’t hear.

Or in Hitchcock’s example, we pan down under the table our character is sitting at to reveal the villainous character taping a bomb to the table leg that our hero character doesn’t see.

To create dramatic irony in a story told from a third-person omniscient point of view, you have the most flexibility to reveal information as needed.

As such, you can write the story and cut away to any scene at any point for the purpose of revealing new information for dramatic irony.

Keep in mind, writing any story this way can sometimes dissipate tension, as well as keep the audience in a more cerebral mindset as they put the puzzle pieces together themselves. This is good for sprawling historical biopics or ‘whodunit’ crime mysteries.

We open on a bomb, in the hands of a faceless villain. Behind him, in an alleyway, we watch a COUPLE turn a corner. The man with the bomb rushes to a car, and places the bomb in the backseat of the trunk, slinking away into the shadows.

The couple from before exits the alley, and saunter straight up to the car in question. They get in and begin to drive away. We follow them as they drive off.

What happens next? See for yourself – it’s a scene from Orson Welles’ Touch of Evil, hosted courteously by Youtuber Matteo Leoni, which you can watch here:

Now this is the opening of the movie, and the characters in question were only really introduced to us from afar. We have no idea who they are or what their dreams are. What happens from here is suspenseful, but it isn’t exactly heartbreaking.

Imagine if we had been following these characters the whole film until now. We would be on the edge of our seat, yelling at the screen!

In other words, the more emotionally invested we are in a character the more impactful the dramatic tension will be.

Dramatic Irony in Tragedy and Comedy

Dramatic irony is the fuel that burns in the story engine of good drama – hence the name “dramatic” irony.

And just like how great drama makes great comedy, dramatic irony is a great tool to use in tragedies and comedies too.

Nothing is more dramatic than one character with a secret that another character doesn’t know about, but we as the audience do.

It’s the stuff of Greek and Shakespearean tragedy. Think about the dramatic irony at the tragic end of Romeo and Juliet or the epic classic Oedipus Rex.

Shakespeare’s comedies are some of the best examples of executing dramatic irony as well. Think of all the mistaken identity, mix-ups, and dramatic irony inherent in classics like Taming of the Shrew, 12th Night, or A Midsummer’s Night Dream.

Dramatic irony is inherent in the classical story structure of the romantic comedy genre as well, as each romcom is built around a “tragic misunderstanding.”

We as the audience know it’s a misunderstanding, but our leads don’t, and the conclusion of the story only comes when they finally realize what we’ve known all along: that it was all just one big misunderstanding.

Up Next: how to use Situational Irony in Film

So that concludes this article on dramatic irony in film.

Next up we shall take at closer look at situational irony in film.