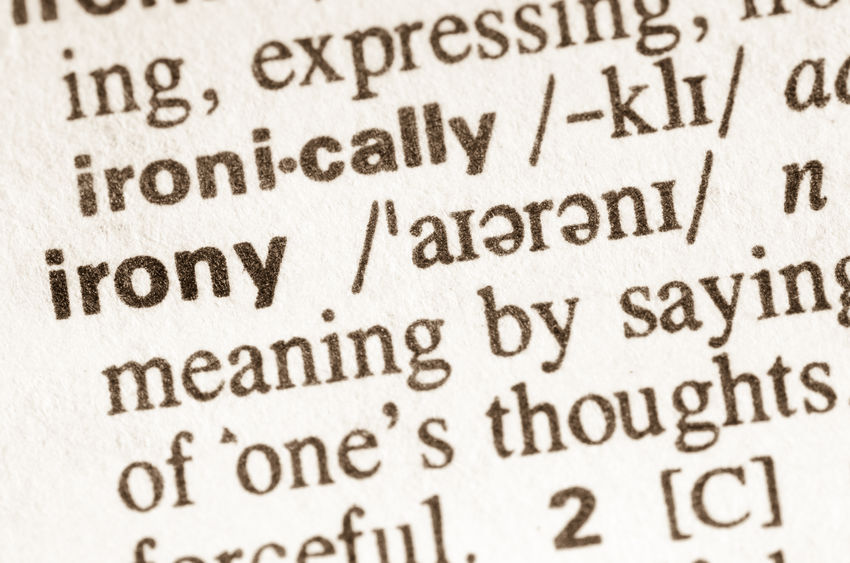 You rush out of bed, late for a meeting.

You throw on the fastest outfit you can put together, and nearly kill yourself cutting through traffic and running red lights to get to work on time.

When you arrive at work, you find out the meeting’s been postponed.

“Seriously? All that trouble… and it’s not even happening?!”

This is what we call irony.

When writing a screenplay, you can use irony as a tool, as well as a rhetorical device, to describe what happens when someone says something or does something that is actually the opposite of what is expected.

In order to do so, we need first to understand the meaning of irony in relation to storytelling and screenplay writing. Here’s the short definition:

Irony is the existence of two ideas that are opposite to one another. In storytelling, there are three main types of irony that can be used to improve your writing and add new layers of depth, suspense, or humor to your work. They are dramatic irony, situational irony, and verbal irony.

In this series of articles, I’ll start by breaking each of these different forms of irony down in more detail.

In the next couple of articles, I’ll get into how you can use each type of irony in your screenwriting, and also show some examples of how it’s used in films already.

So let’s dive in.

Dramatic irony is actually the strongest tool out of the three that you can use to layer your plotlines and deepen your storytelling ability on screen.

Example: the audience sees the burning room in the building before our hero does. We watch him climb the stairs to get to the room, maybe even with a special someone who he’s looking to impress. We are left to cringe as he opens the door, revealing the flaming room.

Dramatic irony is one of the main reasons we as audience members love horror movies – and love to yell at the character’s on the screen. “Don’t go into the basement, you idiot! He’s in there!!!” There are different ways to achieve this on screen, which I’ll get into in the next article in this series.

Whether you are showing the killer’s whereabouts to the audience ahead of time or not, dramatic irony is inherent in horror movies, as we audience-goers know what genre we’re watching, but the characters don’t. We know they may very well die – but they don’t.

Situational irony is when someone does something opposite of what we expected them to do in a specific situation.

Many people tend to use the word “ironic” incorrectly to describe situations that are unusual, or even coincidental.

However, a situation playing out differently than expected doesn’t make it ironic – it has to be the opposite of what is expected.

For example, imagine a character walks into a room only to discover the entire place covered in flames and completely destroyed. They look around and say, “This is ironic.” What? Why?

Instead, imagine that same character walking into that room and observing the chaos around them – and then they grab a book off the burning bookshelf, take a seat in a smoldering chair, and start reading.

That’s not what we expected them to do –  thus, it is situational irony.

Verbal irony is the difference between what is said and what is meant. You say one thing but mean the opposite.

While situational irony refers to situations that play out in an opposite manner than what is expected, verbal irony is a statement that is the opposite of what’s really going on.

To use the previous example:

Our hero enters a room, finds it engulfed in flames, and says, “Great, just fantastic, absolutely fantastic!” as they proceed to run around the room trying to put out the fire. This is very clearly the opposite of what they mean.

The difference between verbal irony and sarcasm

People often use the word “ironic” incorrectly because they confuse verbal irony with sarcasm.

When someone is being sarcastic, they are saying something they don’t mean. It is often the opposite of what they mean, but it only has to be a statement that isn’t true.

Verbal irony, by contrast, is when someone says the literal opposite of what they mean or what is happening.

Sarcasm is frequently meant to be condescending and biting, while verbal irony can be used in many different contexts.

Up Next: How to use dramatic irony in film

That should give you a pretty good idea about what the three ironies are and the differences between them.

Now, let’s break down how you can use these three different types of ironies to improve your on-screen storytelling.

I’ll start by showing how you can use dramatic irony in film.