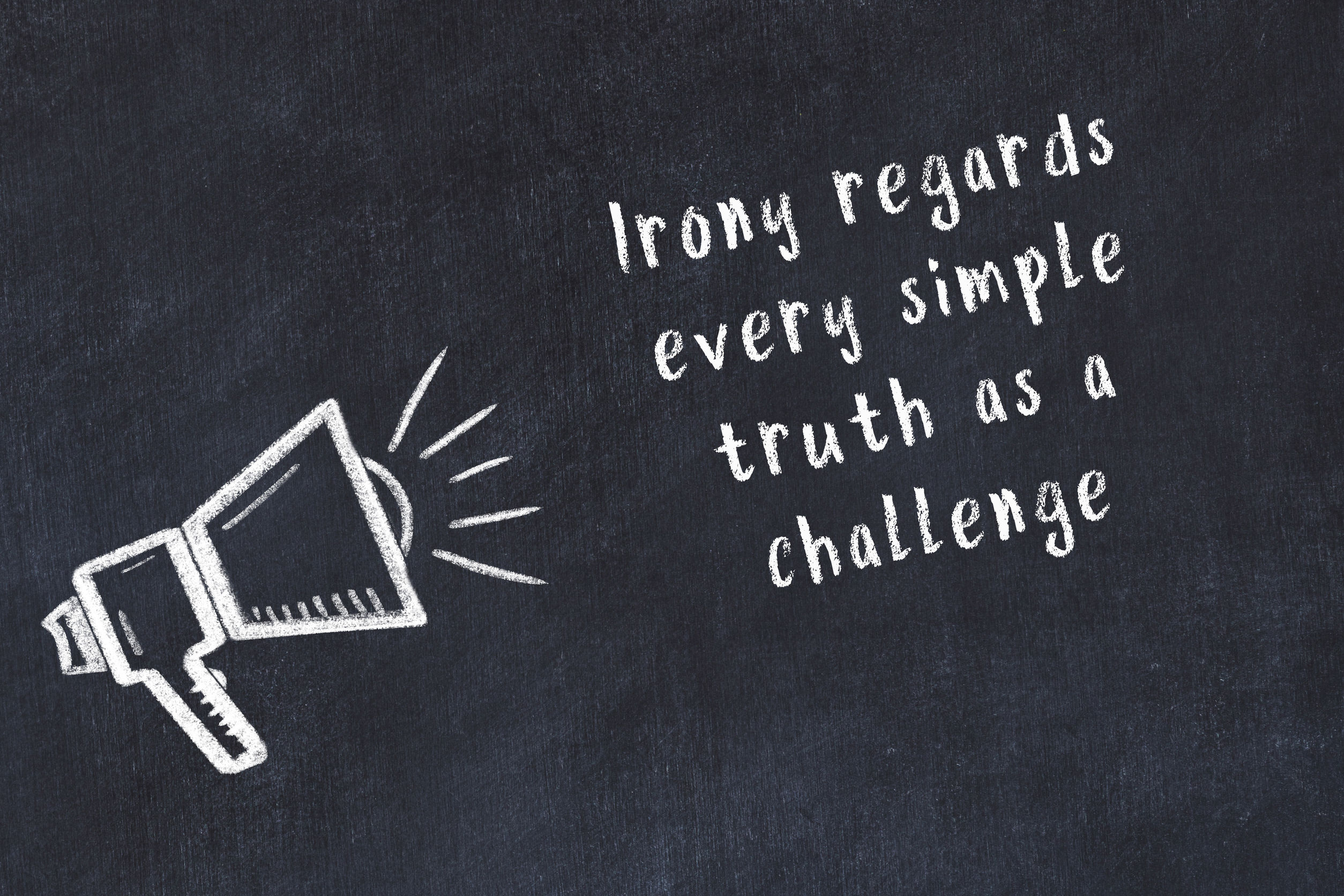 The top image features the famous quote by Professor Mason Cooley (1927-2002). It means that simple truths are straightforward and easy to understand. But with irony, the reader/viewer must engage in analytical thinking in order to uncover and appreciate the hidden meaning within the ironic statement that, in turn, challenges this truth.

This is the fourth and last article, in the short series ‘The Three Types Of Irony and How To Use Them In Film‘. If you haven’t already, you can read the first one here.

In this article, I’ll break down verbal irony in film, and explain how you can apply it in your screenwriting.

Verbal irony is simply when someone says the opposite of what they mean. Verbal irony in dialogue can be a throwaway joke or even a plot device.

To land a joke using verbal irony, the audience has to know that the person means the opposite of what they are saying. This can be done by using situational irony to set up the joke.

Imagine your character’s on the worst date of their life and their mom calls and asks how it’s going.

Or they’ve just survived a horrific plane crash and the credit card company calls and tells them they’ve just earned enough miles for a free trip to Hawaii.

You could have your characters say how they are truly feeling. Or you could use verbal irony to make them say the opposite, but as the audience can clearly see, it’s the complete inverse of how they truly feel.

If it’s a good enough joke, the audience will laugh because they’re in on it!

How to use Verbal Irony as part of the Plot

Imagine a scene where a character lies to another and says the opposite of what they mean. We as the audience know it because we’ve seen the truth of the situation in a previous scene.

Now there’s a conflict that we’re following. Will the other characters find out the truth?

You can inversely use verbal irony to reveal the truth later on in a movie. This can be an effective plot device, especially in a mystery or thriller, as the audience is part of the process as the protagonist realizes the truth, giving them that exciting  “A-HA!” moment alongside the lead.

Watch this scene from Mean Girls, uploaded courtesy of Youtuber Josie Leide, for an example of what I mean:

So this example is technically a joke and a plot device, as Mean Girls is a comedy, but it’s a great example of verbal irony being used to reveal information about a character.

Lastly, with all of the scenarios of verbal irony I just explained, it’s important to remember and consider verbal irony as a form of subtext.

Subtext is what’s going on beneath the surface of a line of dialogue. It’s what the character really means by what they say.

The best writing, particularly the best dialogue, comes from using subtext to tell the story – not necessarily the words themselves.

We don’t want to hurt each other’s feelings by being direct but end up hurting them anyway. We don’t want to say what we want, but it ends up coming out one way or another.

When we write dialogue for our characters, we often do the opposite – we make everyone say exactly what they are thinking and exactly what they want. The truth is, that’s both inauthentic to the human experience and not very interesting to read or watch. It sounds fake or wooden.

If you write with both verbal irony and subtext in mind, you can write dialogue that informs the audience of what’s going on using clues.

Without the characters saying outright what they want, the conflict becomes inherent in the construction in the scene. Now you can have fun writing!

Give your characters, and the actors who play them, a meaty role to sink their teeth into by using verbal irony to convey subtext, reveal plot devices and make clever jokes, and you’ve got a much more interesting script in your hands!

Final word? Use all three!

Your film storytelling is only as good as the words on the page.

To create compelling stories using the language of film, practice trying to incorporate these different types of irony into your screenwriting, and see how it changes the plot, scenes, and characters for the better.

I guarantee if you use irony correctly, you will have a lot more compelling scenes than if you had written them in a straightforward way. You can then use the irony on the page to inform your storytelling as a director as well.

Having verbal irony in a scene gives the actors something interesting to play.

Having situational irony in your story gives you something interesting to do as you direct a familiar genre or story.

And having dramatic irony in a scene gives you interesting ways to build suspense and keep the audience glued to the screen.

Try it for yourself and let us know how it turns out!