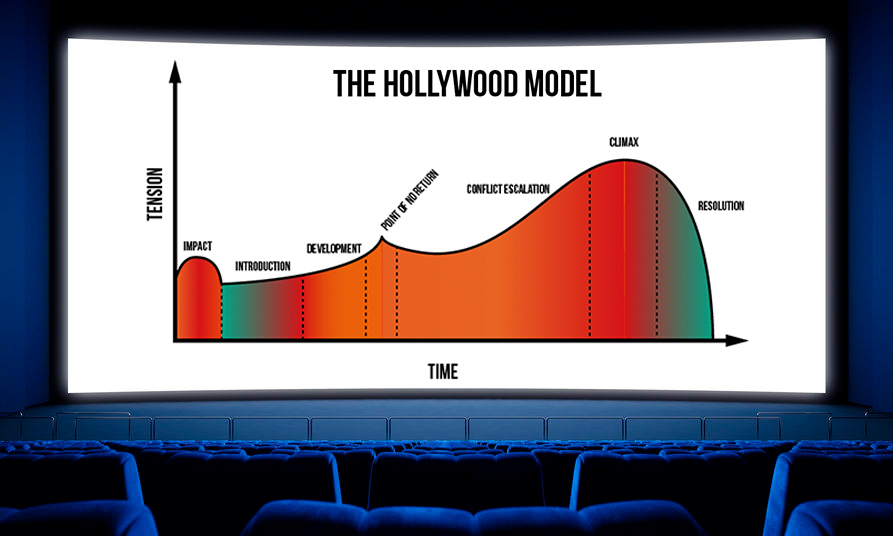 We write a lot about the various narrative story structures that screenwriters use to write their screenplays. Still, one we haven’t covered yet is The Hollywood Model, or what’s known in Denmark as the “Berettermodellen.”

So what is The Hollywood Model exactly?

The Hollywood Model describes the way a film’s journey builds suspense and tension throughout the overall story and is useful as both a film analysis and screenwriting tool. Where other story structure systems can get mired down in outlining the individual beats of a character’s journey down to an exact page number, The Hollywood Model is less about the minutiae of storytelling as it is about the inertia!

In a way, this model is better at capturing the perpetual motion of big Hollywood films better than the traditional story arc model, which is more aligned with following every beat of Joseph Campbell’s “Hero’s Journey” and can leave some Hollywood films feeling formulaic.

Here is the visual diagram of The Hollywood Model in action:

In The Hollywood Model, a story begins with a sudden impact; something that draws you into the world of the story and the characters in a meaningful way.

We then take a step back to introduce the characters and the world they inhabit, developing them and the surrounding tension over time to a point of no return.

From the point of no return, the characters are now on a collision course of conflict escalation leading to an inevitable climax.

At the climax, the central tension is resolved, and the suspense driving the story is relaxed, faded out through a resolution that brings us back to the normal state of things before the initial impact of the story began in the first place.

In reality, the curve isn’t as smooth as it appears in the model. There will always be small bumps, dips, and pauses (or pauses that seem like pauses). A movie is a rocky road, but the overarching tension curve follows the model’s line.

Simple enough to follow, right? So what makes The Hollywood Model different from other narrative story structure systems?

We’ll break that down, as well as how The Hollywood Model gives the writer a little more freedom to be creative with how their character’s journey ebbs and flows while still keeping the story’s overall emphasis on a rising conflict that needs to be resolved by the end of the film.

The beats of The Hollywood Model with examples.

Before we discuss why a writer might choose The Hollywood Model over other story structure systems, let’s break down the individual beats of the diagram above with examples from familiar films to hone in on what makes this model unique.

Every traditional story begins with a character living in a normal world. As writers, we learn early that beginning every story with the main character waking up is far from the most original way to begin a story.

The Impact beat of The Hollywood Model is a brilliant way to shake yourself out of the mindsight that your story has to start in a “normal way” just because your story’s protagonist begins their journey in a normal world.

The idea is to intrigue the audience immediately while hinting at the tone and themes present in what’s to come.

Think about how some films start off in the middle of the action, then go back and explain what’s happening later – like how we meet Indiana Jones in the middle of a temple raid in Raiders of the Lost Ark.

Other films will begin with a flashback and then explain it later, like Goodfellas, The Departed, Wolf of Wallstreet, or really any Martin Scorsese movie!

If you are telling a non-linear story, you can also use some combination of both, like Quentin Tarantino does in Inglorious Basterds and Kill Bill Vol. 1, respectively.

In both, we open on a flashback that we enter in the middle of with very little exposition. As we watch the scene and/or sequence play out, we are immediately gripped before jumping forwards or backward in time to learn more about the narrative consequences of the initial “impact” we just experienced through the next beat: the introduction.

The introduction is when the story orients us in the “normal” world of the story.

After experiencing an exciting first sequence that gets us hooked into the story, the introduction presents us with everything we need to know: the time, the place, the characters, and the stakes. It’s essentially the ‘who,’ ‘what,’ ‘where,’ ‘when,’ and ‘why’ of the storytelling necessary to get the audience on board with the rest of the film.

While an introduction is pretty self-explanatory, I like to point out how the more creative you are with this beat, the better. Think about the wacky way Wes Anderson introduces us to the eccentric character of Max and the world he inhabits in the film Rushmore through a series of whimsical silhouettes:

We learn that Max is in love with everything about his school except the actual school part, and how this is now a conflict for him if he wishes to remain at Rushmore.

Beyond the initial introduction, The Hollywood Model then suggest it’s time for development.

Development is where you flesh out the world of the character, and we learn more about their aspirations and fears and their relationships with other characters in the world.

We also begin to understand how the conflict from the initial impact is created or continued. This is where other story structure models suggest throwing in an inciting incident and call to adventure.

This still of Ron Stallworth and Flip Zimmerman connecting and hatching their plan from Spike Lee’s BlacKkKlansan feels the most indicative of this moment to me.

Things heat up as we head to the…

Beat 4: The point of no return.

The point of no return is the moment the tension rises to the point where conflict is inevitable. The story’s central tension has taken off, and our protagonists have no choice but to continue forward.

They are then thrust forward into action, creating rising suspense that drives the story to a point where they cannot turn back.

There’s really a no better example of this than when Marty McFly gets trapped in the future in Back to the Future. He’s in the new world now, and the tension becomes clear: he has to escape without messing up the past so bad that he ruins his own future.

We are now locked into the story’s central conflict, so this story beat is all about how the story continues to escalate tensions towards the inevitable conclusion.

In the conflict escalation stage, the stakes should always be getting higher and higher. Since this is The Hollywood Model, this beat in the story obviously takes up the bulk of the screen time.

No movie genre does this sequence better than the action movie. However, I like how the Rocky sequel/spin-off Creed plays with this sequence to build the dramatic stakes of the relationship between Adonis and Rocky, mirroring the rising stakes of Adonis’ fights.

As you can see, your protagonist must be put through the wringer. They’ve got to overcome challenge after challenge, each one more impossible to overcome than the last, increasing the audience’s suspense whether or not they can reach their goals while building towards the climax.

The climax of the film is pretty self-explanatory. In The Hollywood Model, it’s when the central tension is finally resolved.

If you think of your story’s narrative arc like a bowstring, you want to be constantly twisting the string tighter and tighter until it eventually becomes too tightly wound and snaps.

The climax of your story should feel inevitable. No matter what the protagonist does, this moment was destined to occur because of every step along the way that escalated it to this point.

Every genre film has specific conventions regarding the climax unique to their genre, but none are as consistent as the horror genre.

Inevitably, the thing the protagonist has been running from the whole film must finally be faced, and the best horror movies know how to tie the ghost, ghoul, or goblin haunting them to the main character’s central flaw.

The Babadook, written and directed by Jennifer Kent, demonstrates this via a terrific climax that ties “facing the monster” to the central theme of the whole film. You’ll have to watch it to get it 😉

The final Beat 7: The Resolution.

Once the story’s central tension has been resolved, the story is essentially over – except for an outro that resolves the story and brings the world of the film back to normal.

In essence, the resolution is the come-down after the tension is relieved. The best resolutions guide the audience to reflect on what they’ve just seen vicariously as the characters from the story do the same.

Sometimes, not much is left to be said after the climax is concluded, so resolutions can be as brief or as long as you feel they need to be.

Keep in mind: once the central dramatic tension has been resolved, the audience is ready for the story to come to an end, so don’t overstay your welcome.

Final thought: Why use The Hollywood Model?

You may ask yourself why you’d want to use this storytelling model over any of the other ones we’ve shared on this site over the years.

The reason is simple: this storytelling model gives you more flexibility to think outside the Hero’s Journey’s confines. While the Hero’s Journey is a great resource to help you structure your stories, many writers feel too restricted by its rigid nature.

By thinking of your stories as one continuous rising action, you can play around with the story’s individual beats. You don’t have to be restricted by refusals of calls or midpoints or any of that nonsense.

Those story beats will occur naturally as you write anyway, but they can hinder creativity when you feel you need to write to a specific set of rules.

As traditional audiences, there are certain expectations inherent when we sit down in the theater. Still, unless they are studying the stuff, the average movie-goer isn’t going to hold you to some strict standard of how and when things should happen.

The Hollywood Model lets you break from the more restrictive structure rules to be more free-form and loose. You can play with timelines and structure so long as you build your story’s central tension towards an inevitable confrontation of some kind or another.

Next time you sit down to write, try thinking of your writing using The Hollywood Model and see if it helps you break from the more rigid structural systems you’re used to.

If you feel more inspired, stick with it! If not, there’s no shame in sticking to what’s more comfortable. Rules are meant to be broken but also meant to be followed. It’s all up to the writer!

Writer Monique Jones said this of the Coen Brothers film Barton Fink, which feels relevant to this topic: “But sometimes the creative energy that’s within talented people can become a scary entity all its own because of our ability to draw inspiration from any and everything.” – Indiewire.