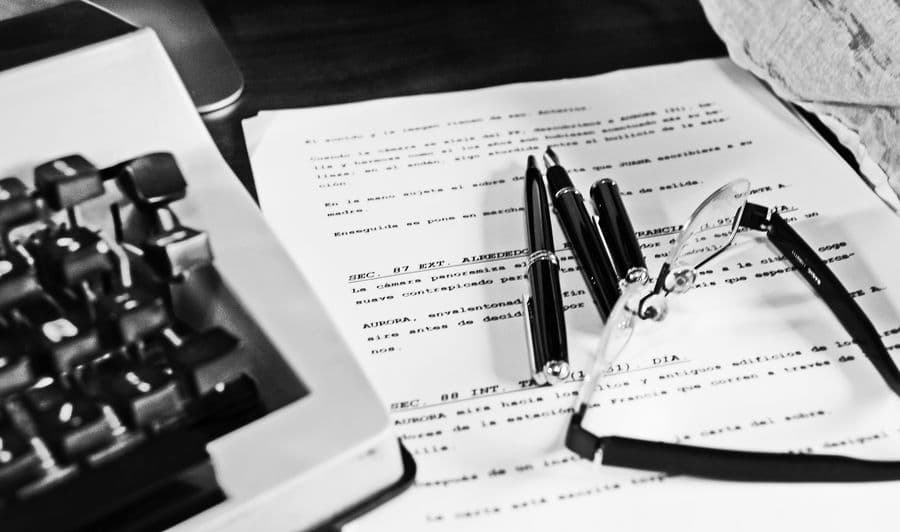 Screenplay format refers to the formatting of a document that makes a screenplay a screenplay, not a book, short story, play, or some other type of writing.

These certain formatting elements, like scene headings, character headings, dialogue, and transitions, are unique to the visual nature of screenplays.

Because screenplays are used as a blueprint that the entire film crew uses to inform their creative decisions, they must be written in a visual language that is universal in style and format.

This is, so any person in any stage of production will know what they are reading when they refer back to a script.

However, the screenplay format is unique because the settings and locations can change anytime.

Unlike theater scenes, which (mostly) limit themselves to one singular place and continuous action, films can jump around in space and time easily, which is why scene headings, referred to in shorthand as slug lines, are used to divide up screenplay scenes by location.

Because slug lines are formatted universally, a screenplay reader can easily jump around any script and find their place in the story.

The formatting goes as follows:

Here’s an example of a very simple slugline:

Underneath the slugline, the rest of the scene will take place. Begin setting the scene by briefly describing the location, along with whatever character and starting action is driving the top of the scene.

Now how to introduce and format characters. If a character is introduced for the first time, their name should be in ALL CAPS to let the reader know they are a new character.

When a character speaks, their name will be ALL CAPS and CENTERED in the middle of the page, which screenwriting software should do for you automatically.

If not, a word processor can center character names relatively easily, but the dialogue is a bit trickier.

A character’s dialogue reads below the Character’s name, also centered but within a wider margin.

It’s easiest to visualize in the context of a scene, and since I’m assuming you already have a screenplay software you plan to use or will be buying or downloading one after this article, I’ll go ahead and show you what it looks like in context:

Example of a Scene in Action

Here’s an example scene I wrote introducing the above rules, along with a few more. (Quick note – when I introduce a new term, in action lines or dialogue, it will be in bold):

Let’s pick up where the scene left off. You must limit your description in your action lines to only things the viewer can see or hear in the movie itself.

That’s because page space on a screenplay is precious. One screenplay page is usually equivalent to one minute of screen time, give or take.

If you spend a lot of page count describing what viewers won’t be able to see, you will write something drastically longer than what the final product will be.

This will not only slow down the reader but could very well turn them off completely, as many people who read your screenplay will be well-versed in the Hollywood way of doing things – including ditching things they feel waste their time.

Plus, unless you are directing the project yourself, directors and actors will typically be the ones to decide the inner thoughts of their characters on the day of filming or in the moment anyway.

But what if you want to indicate that something a character is saying is not what they feel? That’s where parentheticals come in.

Parentheticals are also used for housekeeping purposes. For example, if a character is speaking again after they just spoke, you would use a parenthetical next to their name that looks like this: JOHN WAYNE (CONT’D), which is short for “continued.”

Or if a character is talking to someone on the phone, when the person on the other line who is heard but not seen speaks, you would use a parenthetical next to their name to indicate they are not on screen.

That looks like this: NEW CHARACTER (O.S.), abbreviated from “off-screen.”

You also might need to use a parenthetical to explain something technical to the reader, as if a certain character speaks in a different language when talking to a third character.

You can do this in the dialogue or the scene description, but indicate that it isn’t part of the action by italicizing it. Again, this is a personal style choice, but I think this looks cleanest.

More on Parentheticals – Transitions and Beats

Here’s an example of all of the above, as well as how to format transitions like CUT TO: or FADE OUT:, which are always capitalized and right-hand justified:

Notice how I put the time of day as SAME in the slugline above to indicate it is happening simultaneously. I also used the parenthetical (INTERCUT) after the time of day to indicate that the camera will cut back and forth between both locations as the characters continue.

Using “Intercut,” you don’t have to use a new slugline every time one character does an action. This also helps make it clear that the conversation is happening over the course of one scene.

Another trick – by using the parenthetical “(then)” in dialogue, as I do in John Wayne’s second line, you are creating the same effect as writing “(beat)” without being so obvious about it.

Some More Screenwriting Rules of Thumb

One helpful tip when writing and formatting screenplays: think like a producer.

Make it easy for the future production company and director tasked with physically producing your script by always indicating when there’s a new set-up and making it easy to follow the action.

If you want to think about it more in creative terms: you want the reader to be watching the movie in their head.

If you want to get creative and technical simultaneously, you can think about each sentence you write as its own shot.

When you write a line describing a place, that’s like an establishing shot. If you want to indicate a close-up of an important object, make it its own sentence.

Are you writing an action scene? Call out each important action in its own short sentence: the shorter the sentence, the more intense the action.

Think about how action scenes are cut fast to make them more exciting. It’s a style choice, but your action could emulate that editing style to make your writing more energetic.

While it doesn’t always work this way, following this rule of thumb is a good way to start thinking and writing using the visual language of film.

You can, of course, write in whatever style you want, but by writing as if every sentence were its own shot, you are, in a way, directing the movie you want the reader to see on the page.

Keep in mind: it’s bad form actually to call out the shots in specific terms. As a rule, don’t write “CLOSE UP SHOT” unless you are directing the movie.

Even then, it’s always more artful to write out your shots so subtly as not to take the reader out of the story. If you write your sentences from the perspective of a specific shot in mind, your words should naturally guide the production crew to see what you see.

In certain cases, you may use shorthand like CLOSE ON or BIRDS EYE to indirectly indicate the point of view you want the reader to view a scene or specific image from.

Here’s a short example of wrapping up our scene between John Wayne and the Racoons:

And there it is. If you are interested in reading the whole script in its totality, you can download and read it by clicking here:

For those at home cheering for the Racoon, don’t worry: this fight is, surely, not over.

He’ll be back to fight another day again with his other raccoon friend as a backup. Perhaps a raccoon ambush will await John Wayne next time he settles down at a campfire out in the bush? Stay tuned…

Back on the subject: to learn the ins and out’s of writing a screenplay that works, it’s always best to try it yourself.

However, it’s probably not wise to just jump into a feature. Instead, start on a small scale by writing a short film first!

If you’re going to write a short film, be sure you know how to write a screenplay that works first.

And when you’ve written your first script, make sure to know how to sell a screenplay too.