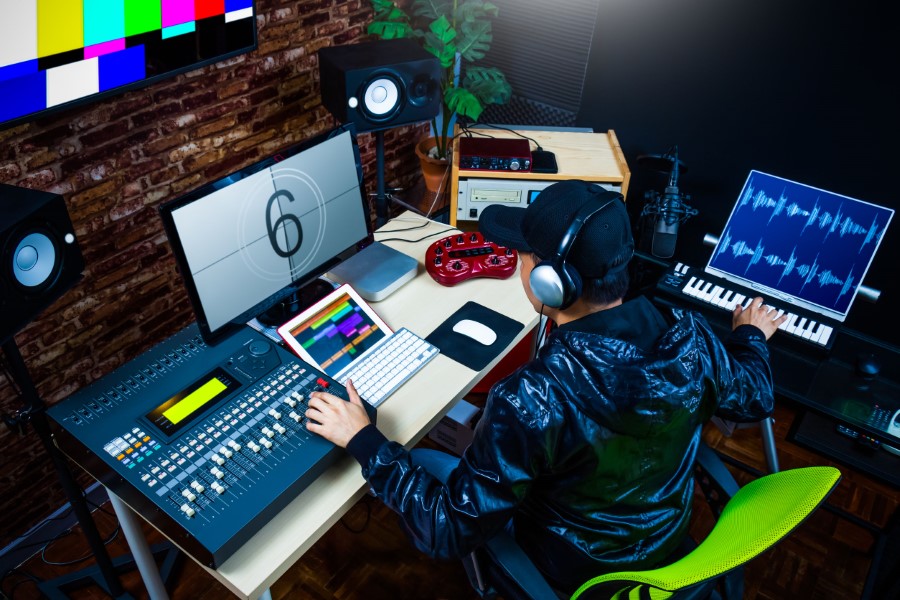 Music is an awesome way to spice up any video. It creates an atmosphere and can introduce dynamic to even boring B-roll footage.

In short, music is the glue, which binds all of your footage together no matter you’re making a music video, a corporate video, a narrative video or a short video for Instagram.

But knowing how to edit a video to music and also get a good result is something which takes some time and practice.

For example, do you edit to the beat or to the off-beat of the music?

Here are 6 tips – broken down into two separate videos – which will make editing video to music easier and more efficient.

Here links to all the 6 tips mentioned in this article:

I’ll break down these tips in detail in the article below.

1. Learn How To Read A Wave-Form

Knowing how to read a wave-form is important when your editing video in general, and even more so if you’re editing your video to music.

This goes for corporate shots with background royalty-free music as well as for music videos.

What you basically want to do is single out the attack peak of each sound you want to use as the basis for your edit. Like so:

When you’re comfortable with reading waveforms, have a look at video tip 6 on how to quickly add beat markers for your video edit.

2. Don’t Be Afraid To Count (And Sing) Along With The Music

On heavily compressed tracks it can be difficult to actually see the attack peaks for each beat and rhythmic subdivision of a song.

Tip number two is to practice counting the beats yourself.

This is especially helpful if there’s isn’t a kick drum or a snare you can cut to, which is easily seen in the waveform. It is also helpful if there are a lot of syncopated subdivisions.

If you want to cut to the rhythmic subdivision of a song, you can start counting 1/8-notes, 1/16 notes or even 1/8 notes triplets (if they’re present).

This is a great technique to identify e.g. a 1/16-note lift in a track, which is heavily compressed.

3. Break Down The Song Structure Into Its Basic Building Blocks

Tip three is to break down the song into its basic components or building blocks, i.e. to identify the basic parts of the songs like the intro, verse, bridge, chorus, breakdown, and outro.

Not all songs have all these parts, but you’ll usually find some of them.

Breaking the song into the basic structure and making some cuts gives you a quick overview of the dynamic differences in the song, which will help you further down the line when you’re editing your video.

4. Use The Song Structure To Structure Your Video Edit And Tell Your Story

Inherent in most music tracks is a story. I’m not talking about the lyrics here, but the dynamic highs of lows – like the differences in the dynamics between a verse and a chorus.

In this way, music doesn’t differ that much from a narrative film.

Like a narrative film following the Hollywood Model will follow a structure (teaser -> elaboration -> point of no return -> conflict escalation -> climax -> resolution) a typical pop song will follow a similar structure.

Typically the intro and first verse will be mellow, then you’ll get to the bridge where the dynamics will keep building up to the first chorus, which is the first dynamic peak in the song.

You can use these basic song structures as the basis for your video editing. For example, you might want to start out with some calm footage to set the scene, and then slowly transition into more fast-paced edits as the energy of the song starts to build up.

It totally depends on what you want to achieve of course. Some videos (and songs), calls for a more aggressive edit from the very beginning.

This is mirrored in pop music, where you get the hook and chorus at the very beginning of a song.

In both popular music and videos for YouTube, Instagram or commercials, this is because you want to hook the listener/viewer from the very beginning.

The basic idea, though, here remains the same. If you want to edit a video for YouTube, which uses fast-paced editing from the start – then choose a song, which has an energetic intro with the chorus and hook up front.

5. Use The Rhythmic Subdivisions To Create A More Dynamic Video Edit

If you only cut between two video clips on the first beat of a bar, your video will end up boring and predictable.

Instead, try to use the rhythmic subdivisions like syncopated chords or percussion as the basis for your edits.

A hard cut on the 1/16-note lift just before the first downbeat of the next bar will be more much interesting to the view than if you just cut on the downbeat itself.

Similar you can surprise the viewer by skipping the first downbeat and cutting on the second downbeat of a bar.

Also, try to match such a surprising move with something of a dynamic impact in your video footage – like you taking a nosedive on a ski slope, falling off a surfboard, making a big splash in a pool or making a basketball going into the hoop.

6. Automate To Sequence Using Markers – The Fastest Way To Sync Video To Music

Automate To Sequence is a technique where you take advantage of the automation of markers inside of your editing software of choice.

When you automate the sequence you’re essentially tapping to the beat (or off-beat) of the music on your keyboard, and at the same time placing markers for quick placement of your video footage afterward.

If you prefer to just read the steps, here they are (there are more in-depth explanations and tips and tricks in the video):

So that’s my six easy tips to start editing video to the beat (and off-beat) of music. I hope you find these ideas helpful.

I’ve tried to keep this as basic as possible, so you can apply these techniques on a lot of different types of videos and songs. That’s why I’ve also limited myself to only using hard cuts in the videos.

Of course, you can go crazy with all kinds of fancy transitions like rolling zooms, swish pans, color burns, glitch effects, and so on.

But often it’s best to use these more fancy effects later on in the editing stage when you’ve got all your basic footage and the overall structure of your video down. And using music is a great tool to help you do just that.

Feel free to share any of your work, if you’ve found any of these techniques useful.

Also, if you’ve got any comments or ideas? Please let me know in the comment section below.