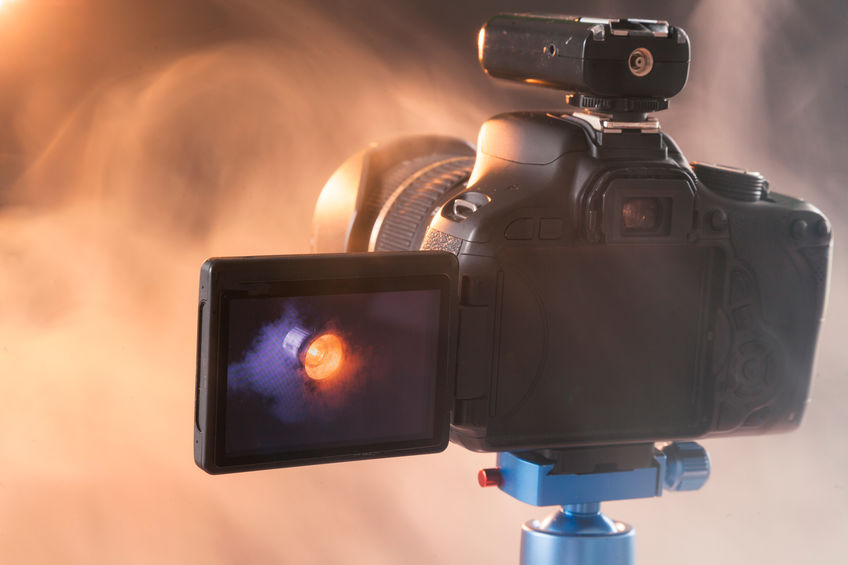 If you’ve been following the first two parts of my comprehensive look at lights and lighting in film and video production, you’ve definitely come across the terms watts, lumens, and lux.

And while I’ve written at length about topics permeated with watts, lumens, and the like, I haven’t yet sat down and bothered to explain what exactly all these ‘light’ words mean.

Does that explain it sufficiently enough for your understanding? Of course not. Let’s dive into more detail!

All lights, from the lowliest household bulb to the most robust industrial power light are measured and labeled with a number of watts.

As mentioned above, a watt is a measurement of power, which is a measure of the rate at which the light consumes electricity.

Higher caliber lights are going to (obviously) necessitate more wattage to keep up their output, so where 60 watts is a standard for tungsten lights in homes or offices, anything from 500+ watts is used for film and video production, with the most common being 500-2000-watt tungsten lights.

While not a term used for film or filmmaking, its relationship to watts makes it important to understand. Where watts measure power, kilowatt-hours measure energy.

Energy is the capacity to do work; in this case, creating light.

Let’s go back to our example of the 60-watt light bulb consuming electricity at a rate of 60 watts. Introducing time into the equation gives us the measurement of energy consumed.

Obviously, this usage increases greatly with strong tungsten lights, so those big film light 2000 watt fresnels are going to consume a lot of energy.

Kilowatt-hours are how the power company keeps track of your electricity consumption, and, as mentioned before, while not commonly tracked in filmmaking, it can be helpful in figuring out how much you might owe if the space you’re renting for your location requires you to cover the power costs of your lights.

A professional LED lighting kit is the way to go if you’re worried about wattage overload and don’t want to shell out an insane amount of cash each month just to pay the electrical bill.

Since LEDs are so much more efficient in their wattage-consumption to light-output, simply using watts as a measurement for both tungsten and LED became inconsistent and difficult.

A 1K tungsten’s brightness will not be the same as a 1K LED’s.

For this reason, measuring the actual light output, or lumens, a light gives off, has become standard when working with mixed assortments of lights.

I mentioned this in my article on how many watts are needed for video production lighting of my comprehensive articles covering lighting for film, but I’ll repeat here:

So, back to our 1K tungsten vs 1K LED example, the 1K LED would be much brighter even though it’s consuming the same wattage.

Remembering those numbers, or checking the lights you have for a lumens rating, can help you run some quick calculations to know just how much light output you’re putting out between all your lights.

This one might be tricky to wrap your head around. Unlike lumens, which are a measure of the light itself, lux are units of illumination.

More technically, one lux is one lumen of light evenly distributed over one square meter of space. Put another way: lux is a measurement of light over a specific area.

As such, lux is dependent on distance, since light spreads wider the further it travels, which corresponds to a falloff in intensity the further from the source it moves. The more surface area a light covers, the more dispersed it is, the less intense the light, hence the number of lux goes down.

Lux is most commonly used in conjunction with lumens, and having a good light meter can help figure out the best ratio in order to expose your scene correctly in-camera.

Distance in Relation to Light Setup

Keep in mind that distance is very important here. Just looking up online how many lumens equal how many lux will not necessarily reproduce accurately on your set.

The more distance the light is given to disperse over a wider area, the less reflective illuminance (in lux) you will have.

This relates to watts as well, since you may need to exchange the lights you have for something more powerful if the distance relationship between your subject and the light cannot change.

Like cousins, watts, lumens, and lux are related in the filmmaking sphere, as each one is connected indirectly to the other.

Knowing what each means and the relationship they have to each other can help you (or your DP) take total command of the lighting of your set and bend that light to your camera’s will.

Remember, a good lightmeter will go a long way in avoiding the headache of having to manually measure these units.

Do you have any other thoughts or comments on watts, lumens, and lux to add? Drop a line in the comments below.

Creative Lighting: How To Use Low-Key Lighting For Dramatic Effect