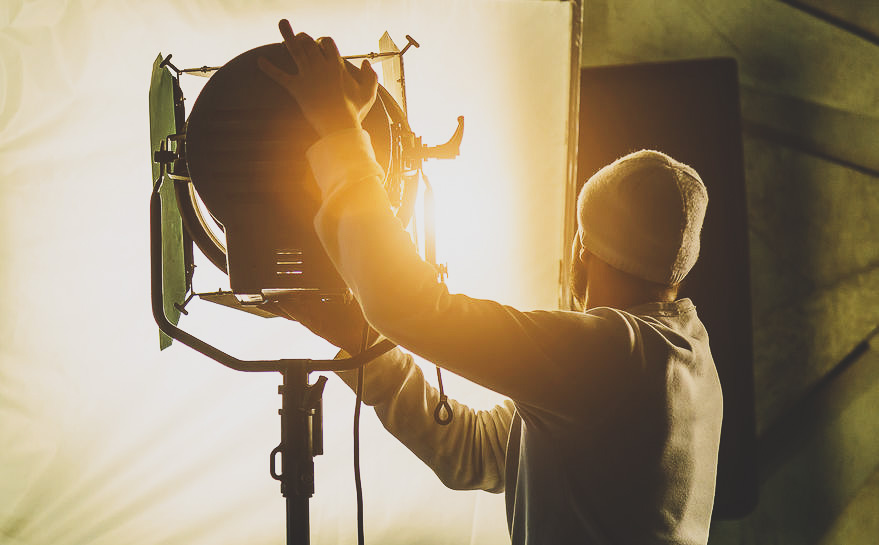 Let’s face it, when your dream of becoming a filmmaker first germinated in your mind, you were probably picturing fancy sets, big, imposing cameras, director’s chairs, your name up in lights… yes, gigantic, glowing, sun-bright lights.

Well, this article is, in fact, the first in a series about lights and lighting, just not those with your name in them.

In part one here, we’re going to talk about the nitty-gritty, the question that only an electrician would usually be asking, but that every filmmaker should know: How many watts do I need for film and video lighting?

For a basic three-point lighting setup, you will need to choose the wattage for your key, fill, and backlight (if you have one). Key lights are your strongest lights and should generally be around 500-2000 watts. The fill light used to fill in the shadows of your subject should be less powerful, 250-500 watts. Finally, your backlight used to give that nice edge-light or “halo” effect on your subject, should be equal to or less than your fill.

Let’s jump into more detail below.

What could you possibly need a 10K or 20K light for? Well, on big-budget sets, these are used to simulate the sun or a heavy full moon-esque brightness during the night.

Think of movies with bright, moonlit nights, or “outdoor” day scenes you know for sure were shot on a sound stage in a studio. Lord of the Rings, the Two Towers is a great example during the battle of Helms Deep.

Another great use for these powerful wattage lights is on interior scenes when you’re pushing “sunlight” through the windows of your setting.

Depending on the distance and diffusion you’re using, these can give off nice crisp lines and hard shadow or be softer and gentler.

This can give a great noir look when paired with some blinds to create shadow and depth or create that cherished “sunray” looks over your subjects.

If you’re interested in knowing more about noir lighting then here’s a link to my guide on how to use low-key lighting for dramatic effect.

What you will far more likely end up using on your indie film shoots, however, are 500-watt to 2K-watt lights. These will give you a nice brightness to work with as a key for most interior scenes, office videos, studio shoots, and YouTube vlog videos.

Lower wattage lights can be rented in kits and packs from most equipment rental houses for pretty affordable rates, so don’t skimp out on good lighting because you don’t have the right bulbs in your basement.

If you go to film school, check your rental store, they should have light kits covering 250-1K as well, and maybe even single 2Ks or 5Ks to rent.

Like I mentioned above, fill lights are the less powerful companions to key lights, designed to fill in the harsh shadows thrown due to the intensity of the key.

Think of sporting matches where the players are fully illuminated with nary a shadow on them but have four shadows trailing them on the ground. This is because lights are set up on all sides to fill in the shadows on their bodies, so visibility is as good as can be.

Film is less drastic, and we want to keep some shadow for depth and eye-catching pleasure, so don’t blast your subject from all sides.

Fill lights should not be as strong as the key light, so whatever strength your key goes, do not exceed that with your fill. This means that your standard shoots that I already mentioned (low-budget shorts, office shoots, YouTube vlogs, and reviews) will work with 500 or fewer watts if you’re using 1K or 2K keys.

Obviously, those day-for-night, hard sunlight or moonlight emulating scenes that are lit with much higher wattage will exponentially apply to the fill as well. In these cases, fill lights can go all the way to 5K.

Whatever you choose to go with will be a matter of taste for you or your employer. Season to taste, as the cooking recipes say.

For a solid, pleasing three-point setup, a 1K key and a 250-500 watt fill are optimal. This creates a slight differential on the face of your subject, giving some depth while not creating hard shadow.

It’s an easy way to achieve a professional-looking image, and most corporate gigs or videography employers will appreciate this look for its easy filmic quality.

It also won’t cost insane amounts to rent these lights together in a kit and the lights are small enough to be wieldy and encourage you to play around with shaping and brightness using flags (large pieces of felt), barn doors (the metal flaps surrounding the lightbulb), diffusion (semi-transparent material to soften light), or scrims (metal netting used to dim light intensity).

If you decide to really up the flair in your image, a backlight will add that little bit of extra oomph. As mentioned above, a backlight is positioned behind the subject in order to just catch their edge with a tad bit of glow. This gives a nice shine or halo effect and helps distinguish hair especially from the background.

Since it’s designed to accent what is already there, a backlight should be equal to or less than your fill light. 250-500 watts max, unless you’re working with some really powerful lights.

Remember, the back light is designed to work in tandem with your fill, so don’t blast your subject from behind unless silhouetting them is a creative choice.

A quick note about outdoor scenes on low-budget shoots: unless you’re using a generator or running cables from a nearby building, you most likely won’t be running lights. Therefore, you shape the light you’re working with.

Bounce boards and reflectors will be of the most use to mold the natural light to your advantage, and you can also use flags or diffusion to create large areas of shadow to avoid direct sunlight.

Also known as a corporate office, shooting in a space that is full of windows can be a challenge due to all the light spill coming from the sun, outside lighting, etc.

To combat this, you can either black out all the windows with tarps or some other equally light-absorptive material, or you can try and work with the natural light and supplement it with your own lights.

The best windows to use are northern and southern facing windows, as these will not be in the arc of the sun throughout the day, and as such, they receive a softer, more constant natural glow all day.

If you’re going to use natural light as a key, then you’ll need a stronger fill to match the brightness, and then offset that brightness by setting your camera to a higher f-stop. If natural lighting is your key light on a bright and sunny day, then a fill of 1K or more will be necessary as a fill.

Also, make sure you slap a blue gel on the tungsten lights you’re using so they will match the color temperature of the natural light.

About plug safety: To avoid potentially overdrawing what normal power circuits can provide and tripping the circuit breakers in your location, or worse, starting an electrical fire, it’s important to note how many watts most outlets are rated for.

Most residential circuits are rated for 1800 to 2400 watts before the breaker trips. How can this be calculated?

To start with, you need to know the amps of the circuit. Most home circuits are 15 or 20 amps. Next is to figure out the voltage. Standard three-prong outlets are 120 volts. To calculate the amperage being used, you need total watts plugged in divided by volts.

This is a quick way to ballpark whether you’ll be in danger of overloading a circuit and will help you spread out your power load safely at your location.

Since you’re messing around with lights that can greatly surpass the standard amount of amperage, it’s a good idea to keep all your lights plugged in to separate outlets if you can manage.

Otherwise, keep all the small wattage lights (250s, 500s) grouped together and the big juice-hogs separated.

Also, avoid outlets with appliances or other power-hungry machines plugged into them, such as toasters, AC units, computers, heaters, refrigerators, etc. Unplug those appliances before using the outlets or avoid them altogether.

Another way to keep your wattage under control and avoid potentially overloading a circuit is by using LEDs instead of tungsten lights.

LED lights are designed to use much less wattage to deliver strong brightness. So, a 500-watt tungsten does not equal the brightness of a 500 watt LED, in fact, a 500-watt LED would be considerably brighter.

To understand the differential, we have to talk about lumens.

Lumens are a measurement of the amount of light given off by a bulb or any light-emitting source.

In other words, lumens are the brightness of a light, and wattage is the energy used by the same light.

Because the wattage difference of LEDs throws a wrench into understanding how much brightness they give off, we usually talk about LEDs in terms of lumens.

Let’s have an example using a general three-point setup with some standard wattage tungsten lights:

Switching to LEDs and using the lowest tier of 30 lumens per watt, the wattage conversion while keeping the total lumens the same would end up closer to 400-watt key, 200-watt fill, 100-watt backlight. Total of 700 watts for the same number of lumens, or actual light.

As you can see, this is much less strain on a circuit and over 1000 watts more efficient than tungsten lights.

From a safety standpoint, LEDs are also better as they run much less hot than tungsten, so the risk of burning is more minimal.

Also, there’s almost no cool downtime and no need to wait to the lamps to cool down before you can pack-up your gear. And LEDs don’t way nearly as much as a tungsten light.

The catch, of course, there is one, is that they’re pricier than tungsten to both buy and rent.

If you’re interested in buying a budget-friendly LED-lighting kit, have a look at our guide 8 Best Budget-Friendly LED Lighting Kits For Video.

Or, if you’re interested in more professional kits, you should check out our guide Best Professional Video Lighting Kits For Any Budget.

You now know enough to calculate the number of watts needed per light and the ratio of key to fill to backlight. Obviously, this is a starting guide, and film is nothing if not experimental, so, once you’ve got this down comfortably, feel free to experiment with your lighting.

Just never experiment with the safety tips, those should always be followed for reasons that I hope are clear.