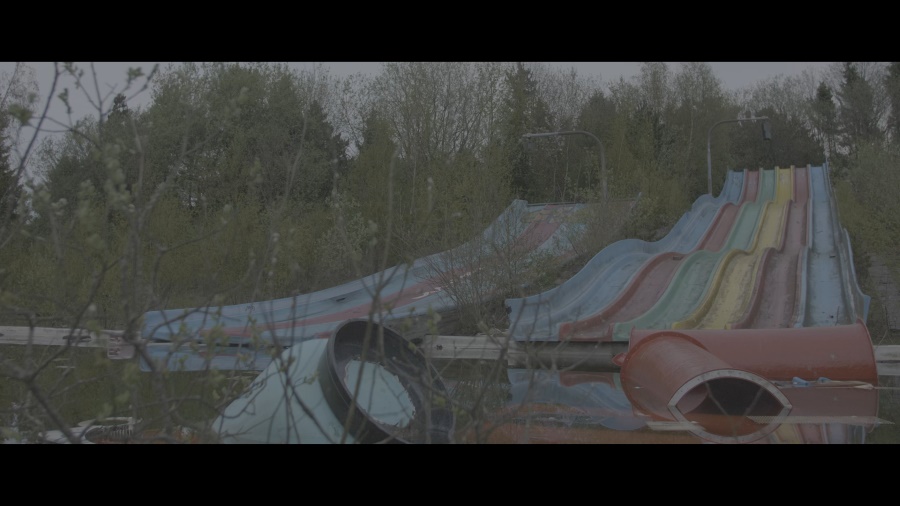 This is my third article on my attempt to make my first short film with just a Panasonic GH5. You can read the first episode here.

Man, this was a stressful but fun shoot!

By chance, I found out that there was an old abandoned amusement park here in Denmark, which I had never heard of.

After some digging, I located the current owner and asked him permission to shoot a scene for my short film. And luckily, he agreed.

The park is some hours’ drive from where I live. Since I don’t drive a car, we had to schedule this shot for a time when we were near the location anyway.

As luck would have it, we had to visit some family in Jutland (we live near Copenhagen), and we were going to be in the vicinity of the amusement park on the way back. So we planned a stop-over to do the scene.

From Dusk till Darkness and Biting Eachothers Heads Off

Everyone knows that the Panasonic GH5 doesn’t excel in low light. And as we reached the amusement park, dusk was already starting to creep in on us. So I started to feel stressed.

Not only that, but we also had to walk a good way from our car to get to the place, I wanted to shoot at.

Oh, and we had our 2-year old kid with us, which we had to keep a constant eye on because there was a lot of stuff at the site, which potentially could be dangerous for a small kid.

Plus we were tired – and hungry and thirsty! Not ideal!

Not ideal at all.

So we did what all energetic film crew does – we started nagging. And my girlfriend and I started biting the head off each other.

But as we were already an experienced film crew and very professional *cough cough* we got to work.

If you’ve read my other posts about this project, you know, that our protagonist finds a pair of goggles with in-built AI, which helps her navigate the post-apocalyptic world in the search for answers.

I did some more digging and found the guy who had made the tv-spot around 2005 or so. His name is Jan Ole Laugesen, and he happens to be an established photographer and videographer here in Denmark.

Jan does some really beautiful fashion and pin-up beauty shots as well as excellent car shots. Go check out his website here: fotofyn.dk.

Everything back then was recorded on tape, and unfortunately, Jan didn’t have any of the original footage. But he gave me permission to use, what I could from the tv-spot.

I wasn’t able to use much, because the tv-spot had a lot of text written all over it, but with a bit of tweaking and keyframing, I got a few useful seconds, which was enough to serve the purpose.

I don’t want to give everything away, but I wanted to create a scene with an attack by a “Reaper”.

In the short film, Reapers are infected humans, who haven’t died from the virus yet but have started to rot. They are extremely aggressive, cannibalistic and attack non-infected humans.

Think a mix of zombies and the beserk motorbike gang from Mad Max (1979). They were inspired by the “Reavers” from the 2005 movie Serenity and serve as an intertextual reference to that film.

So I had found some old clothes, a mask, some post-apocalyptic goggles, and a bloody knife film prop I had bought off Etsy.

I was a bit nervous about how our kid would react to me dressing up and attacking his mom with a big knife. So I made sure, that he saw me putting on the clothes.

When it came to our improvised “action scene” I had no need to worry. I attacked my girlfriend, and she defended herself (I’ve already made some room on the mantel for the “Oscar For Best Stunt”).

Our son sat on the ground laughing and clapping and yelling “again, again”. – Hmm… in hindsight….. do I need to worry about this behavior? Haha.

Anyway, we finished the scene, packed up and started our drive home just before it got dark.

So the last couple of days, I’ve been back at the editing table and tried to piece the footage from this chaotic shoot together.

I found out, that I forgot to get some different angles, for some of the shoots, so I have to get creative. I’m not sure how it will all end up.

I’ve managed to do some edits with the AI-goggles and create some kind of coherent scene so far.

How I’ll edit the “action” sequence, I have no idea. I only have one camera angle, and I’ve never done anything like it before. But hopefully, I can make it fall into place somehow.