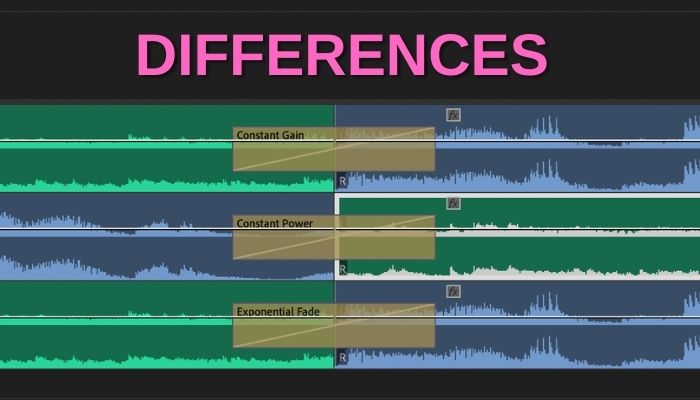 Crossfading is an essential tool for your video projects. A successful video will create the illusion of a seamless edit where the viewer will not notice any of the cuts.

The most important aspect in maintaining this illusion is the audio. Audio has a tendency to pop, crackle, or create a jarring transition between shots without a crossfade.

A crossfade is where the audio between two shots will either gradually increase or decrease over a brief period of time while overlapping. This will create a smoother transition, and when done properly makes the cut appear unnoticeable.

There are two primary methods for creating crossfades: either manually using keyframes, or using transitions pre-built into Premiere.

This article will explain the differences between the three pre-built crossfade transitions inside of Premiere: constant gain, constant power, and exponential fade.

You can find these transitions under the Effects > Audio Transitions > Crossfade folder in the Project Panel.

According to Adobe’s website, “The Constant Gain crossfade changes audio at a constant rate in and out as it transitions between clips. This crossfade can sometimes sound abrupt.”

Let’s look at a visual to help picture what this means. In the photo below, we have two clips with keyframes. The keyframes are set from infinity to 15db over the course of 4 frames. As you can see, both keyframe patterns move in the opposite direction at a constant rate.

This can create a jarring transition between clips. This transition isn’t as smooth as Constant Power, which we will explore next.

You can see how this transition works in the photo below. As you can see, the keyframes on the first clip gradually decrease over several frames while the keyframes gradually increase the gain on the second clip.

In my opinion, this is the best audio crossfade to use. This will give you the smoothest sounding transition because of the gradual shift in gain between clips. Nothing dramatic changes over the course of the transition, so it appears more invisible.

This is best used for projects that use a lot of dialogue from the subject. You can cut parts of the video out without the audio changing dramatically with the cut.

What does this translate to in comparison to the Constant Power transition? Let’s look at a visual.

In the photo above, you can see similar keyframes used as the Constant Power photo. Instead, the points shift in a curved line as opposed to a straight line. This effect accomplishes the same thing, however the velocity of the gain changes with the shape of the line.

This transition would be used where you would want a dramatic change in audio, such as music or a change in scenes. I would not recommend using this effect for dialogue-heavy content as the Constant Power transition sounds more natural.

All of these transitions have their uses in the right context. As I mentioned before, I believe the Constant Power transition is the best to use because of the gradual shift in gain between clips.

It may be best for you to experiment with all of these transitions to see what works best for your style of editing.