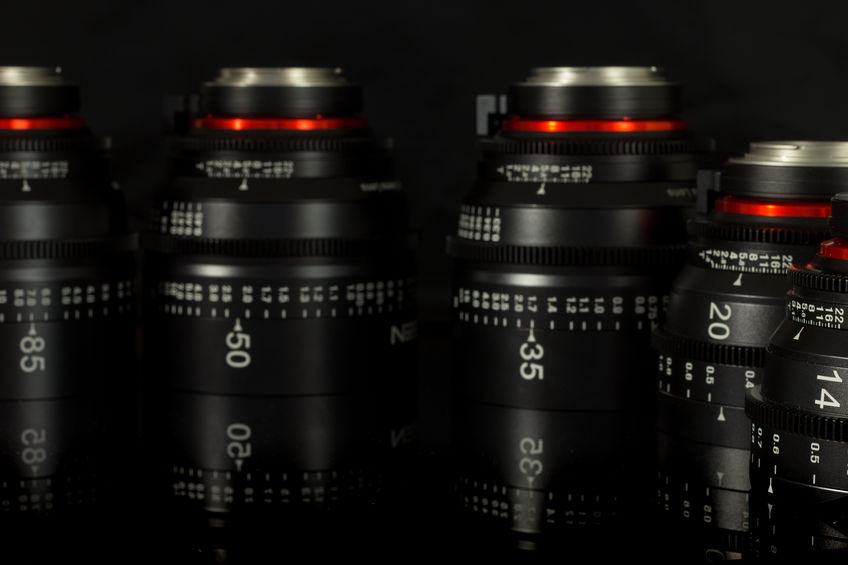 Some of the top movie camera lenses also include handmade components, which dramatically increases the cost.

You can also get more budget-friendly options, some of which are merely re-housed photography lenses, while others are true cine lenses build from the bottom up.

If you want to know more about these options, have a look at our guide Best Affordable Cine Lenses (Budget, Mid-Range, and Professional).

If you want to know whether cine lenses are worth the expensive price tags, here is a closer look at why they cost so much.

What Is the Difference Between Cinema Lenses and Photo Lenses?

A photography camera captures still images. You focus on the subject and take the picture.

A motion picture camera records moving images, which requires greater control over the focus of the lens. You cannot stop between each frame and adjust the focus, aperture, zoom, and other settings.

Due to the different demands of a cine lens, it has different components. It needs to continue working while focusing and adjusting the iris, which increases the complexity of a cinema lens’s design.

Some of the most significant differences between modern cine lenses and photo lenses include:

While some are self-explanatory, others might need an explanation if you’re new to lens design. So let’s dive into these in more detail below.

The housing of photography lenses are often made primarily with plastic components, while cine lenses feature metal construction.

The body of a cine lens, the mount, and internal parts are often made from stainless steel and other hard metals.

The metal construction increases the durability and reliability of the lens, and it is more likely to provide consistent performance.

What Is the Difference Between a T-Stop and an F-Stop?

An f-stop on a photography lens is a formula based calculation of the amount of light that a lens lets through.

However, every still lens has a unique design that subtly variations in the amount of light that reaches the camera sensor.

Cine lenses and photography lenses allow you to adjust the aperture to control the amount of light that reaches the camera sensor.

Adjusting the aperture changes the depth of field by opening or closing the iris of the camera lens.

The amount of light that’s let through the aperture (iris opening) of the lens is specified in two different ways for cine lenses and photography lenses.

With still cameras, the size of the opening of the iris is calculated using a scale of f-stops.

The f-stop is calculated as such…

This means that when you increase the aperture of the lens, the f-stop number becomes lower. And each stop doubles or cuts in half the amount of light let through the lens.

At the same time, an aperture of f/1.4 creates a shallower depth-of-field than f/2.8:

On photography lenses, you switch between f-stops in increments of predefined stops. On most modern lenses, this happens in-camera, i.e., you don’t have an aperture ring on the lens.

On vintage lenses (and a few modern vintage-style lenses), you see an aperture ring on the lens. Switching from one f-stop to the next happens in steps, and is noticeably clunky.

Because f-stops are theoretical measurements based on the lens’s focal length and the lens opening’s size, it is not as precise as a direct measurement of the light that has traveled through a lens.

Practically this means, that two photography lenses with different focal lengths set to the same f-stop, shutter speed, and ISO will produce different results. The exposure will be slightly different when looking at the two images side by side.

This is not a major issue when taking still images, but it can ruin a movie’s look.

Cinema lenses use T-stops, which is a direct and precise measuremen to the actual amount of light that is left, after it has traveled through the lens.

Measuring the amount of light instead of calculating it based on a mathematical formula is important because all optical elements in the lens will stop some light from traveling all the way through, which can lead to differences from lens to lens.

T-stop brings consistency across different lenses, e.g., in a lens kit of different focal lengths. So when the camera operator switches from 35mm to 85mm, he knows that he will get the same exposure each time.

If there constantly were small chances in exposure in a scene shot from multiple camera angles, it would take a huge amount of time (aka money) in post-production to fix these minor imperfections all the time.

Cine lenses also have a separate ring for the iris, providing smooth control over the aperture, meaning you can seamlessly transition from one T-stop to the next.

Both the focus ring and the aperture ring are also larger on cinema lenses compared to photography lenses giving you more precise control of both aperture and focus.

Adjusting the T-stop is also silent, unlike the noticeable click produced when changing f-stops on a still camera.

Many owners of vintage photography lenses, who use them for video, choose to modify the lenses and “de-click” the aperture ring for this same reason.

High-end cinema lenses may provide sharper focus as they typically have a higher-quality glass.

The clarity of the glass used for the lens and internal components significantly impacts the image’s quality or video taken with the camera.

However, high-end photography lenses are capable of producing very sharp images as well.

Also, keep in mind that too sharp an image isn’t always something to aim for when it comes to cinema where a more “organic” look is often preferred.

Above a certain threshold, sharpness become less important. Instead, things like the color rendition and threedimensionality of a lens become the differentiating factor.

Photography lenses are also available with manual focus, but the focus ring has a small diameter due to the need for speed when focusing.

The smaller focus ring means that a photography lens has a shorter focus throw compared to a cinema lens.

The focus throw is the distance the focus ring travels when adjusting the focal point between the minimum focal point and infinity.

With a shorter focus throw distance, photography lenses allow you to focus quickly but with less precision.

Autofocus is not common on cine lenses

AF systems are designed to focus on a subject and even track moving subjects quickly.

Note that there is a difference between autofocus and continuous autofocus.

Autofocus designed for photography is mostly designed to track a subject for a single shot; you focus, then you take the picture.

Continuous autofocus is designed to track a moving subject and keep the subject in focus while moving (or you are moving the camera).

The two systems are getting closer to each other, with eye-tracking being desired in both photography and video, for example.

The continuous autofocus system is highly dependent on the camera being used, with Sony and Canon focus systems being the best.

You can read more about autofocus systems in Guide: Best Autofocus Technology For Video Cameras.

The bottom line is that if you want precise control of the focus without an AF system, you need a cinema lens, as most cinema lenses.

If you want to autofocus on a cine lens, you need either a motorized focus wheel, mounted on rods, that is able to communicate with the continuous autofocus system of the camera.

Or you need one of the few cine zooms that have a motorized servo system build in the lens, such as the Canon Cine Zoom 18-80mm T4.4.

Cinema zoom lenses are often parfocal while photography lenses are not

Most photography zoom lenses are varifocal, which means that the focus is variable.

It changes as the focal length and magnification of the lens change, requiring you or the AF system to refocus.

Cinema lenses are parfocal. The lens holds its focus when zooming in and out.

Without the parfocal design, it would be difficult for camera operators to maintain focus when adjusting the focal length.

When the focal length changes, the image changes slightly (zooms in or out – even on a non-zoomable prime lens) as the internal components move inside the lens. This is referred to as focus breathing.

This is rarely a problem for photography lenses, as you won’t notice the lens breathing on a single image. But it is noticeable when recording video.

Minimizing focus breathing is one of the reasons for the increased cost of cinema lenses. Manufacturers need to pay more attention to the lens design to minimize the impact of internal movements.

Are Cine Lenses Worth it?

Cinema lenses are generally more expensive than a comparable photo lens, and as a videographer, you may wonder whether the cost is worth it?

After all, you can use “normal” lenses for full-frame or mirrorless DSLR cameras.

The answer depends on your needs and the type of video that you plan on filming.

Cine lenses offer many advantages over standard photography lenses, including durable designs and more control over depth-of-field and lighting.

However, cinema lenses are also manual focus, which means you need to dial in focus manually each time. Most cinema lenses will not work with built-in autofocus features.

Even though you can dial in focus with your hand, directly on the lens, most prefer a focus wheel of some sort, which means you also need to add rods and a base or a cage to your camera. This means increasing the cost and the weight of your camera rig.

You might even have to hire a focus puller and have a separate screen wirelessly connected to your camera for this person, which adds to the production cost.

The smooth control of the large manual focus ring is exactly what makes cinema lenses so delightful to work with–especially under controlled conditions like a narrative film or a music video.

But if you’re shooting mostly run and gun interviews or documentaries, a cinema lens might not be the best choice.

You should consider using a video camera with great autofocus and a photography lens that supports this instead.

Also, a cinema lens is not a necessary purchase if you mostly record stationary subjects, e.g., for vlogging.

For example, a video diary or makeup tutorial typically involves a fixed camera and a seated subject. You do not need to adjust the depth of field, aperture setting, zoom, or focus while filming.

Cinema lenses are not for everyone. They offer many advantages for videography and come with a much higher price tag compared to the typical photography lens.

However, if you want full focus control and T-stops, or the best parfocal zoom lenses, you may want to upgrade to a cine lens.

If you want to buy your own cine lenses have a look at our guide Best Affordable Cine Lenses (Budget, Mid-Range, and Professional).