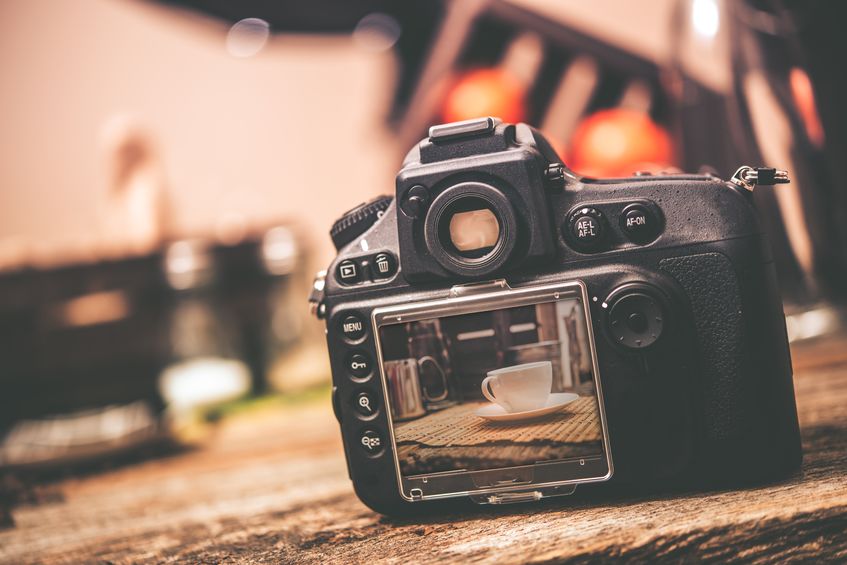 Whether you are talking about photography or videography, a viewfinder is an important element of any camera – without one, you wouldn’t be able to see what you are shooting!

In short, a viewfinder is a small window-shaped piece of glass that photographers and videographers use to see, frame up, or compose their shots. Through the viewfinder, you are able to preview your image, adjust the focus of your lens, and observe select settings like aperture and ISO via digital overlay displays (in newer cameras). Viewfinders are most broadly separated into two categories: optical viewfinders (OVFs) which create a mirrored image via glass and are used in most DSLR cameras or electronic viewfinders (EVFs) which create an electronic image and are used in mirrorless cameras.

Whether your camera has an OVF or EVF, without any viewfinder, you wouldn’t actually be able to see the image you are composing, making viewfinders a vital part of any camera.

We’ll review more about the two main types of different viewfinders, how they work in modern DSLR and mirrorless cameras, and why they are important to your videography beyond the obvious, i.e. seeing your image.

But first let’s take a quick historic look at the origins viewfinders.

The origin of the viewfinder

The original viewfinder design came into fruition thanks in large part to the creation of the telescope – specifically the Galilean telescope, which is why the first viewfinders can be referred to as Galilean viewfinders as they follow the same design of Galileo’s telescope.

A Galilean viewfinder is a simple-to-create two-piece design that allows a viewer to see a subject by placing their eye at the back of the scope to see the scene through the viewfinder. It uses two pieces: a front plano-concave lens and rear or dual convex lens. These two pieces create what’s called an afocal system, which creates an infinite focal length.

In the case of an actual telescope, that infinite focal length allows you to focus on stars that are very far away, and in the case of a camera lens, it allows the lens to zoom in on a subject. However, the original form of the viewfinder was actually a direct viewfinder, which is different from the viewfinders of today.

While today’s viewfinders show you the image directly from the lens, either via mirrors or a digital recreation via a sensor, a direct viewfinder points the same way as the lens but is an approximation of what the lens taking the photo is seeing.

Galilean viewfinders are the main type of viewfinder you’ll find in vintage cameras, but not every camera uses a Galilean viewfinder. That’s because in creating the parallel image in the viewfinder, certain errors of light manipulation, like parallax error, made it hard to get the image exactly right.

So once an alternative was created that allowed you to see what the lens is actually seeing, there was no real point to approximating.

There were also cameras that used viewfinders known as rangefinders, which created a split-image system to take two views from two separate windows on opposite sides and combine them to create a single image for the viewer looking in the middle.

Cameras using this type of viewfinder, called rangefinder cameras, are still used today by modern photographers and are useful for providing a greater field of vision and sense of scope when photographing without the need or bulk created by a zoom lens.

As a photographer or videographer, you’re familiar with the term DSLR when describing cameras, but just in case you need a refresher on what DSLR stands for, it stands for digital single-lens reflex.

Instead of a direct-viewfinder that tries to imitate what the lens is seeing, the original SLR cameras used a mirror to reflect the actual image the lens is seeing upwards so a photographer could see it themselves when looking down at the camera held at waist level.

This mirror was mechanized so it could be moved out of the way when it came time to take the photo, and newer SLR cameras added a prism that reflected the light straight forward so the photographer can use a viewfinder at eye level.

DSLR cameras imitate this ability to see exactly what the lens sees with a live preview option, which is one of the reasons why DSLRs became so popular.

Optical viewfinders would be any of the viewfinders we just listed, while an electronic viewfinder is a viewfinder that recreates the image with a digital sensor and plays it through an LCD screen.

A lot of videographers and photographers prefer optical viewfinders because it shows the scene they are photographing as it really is – while even the best EVF cameras are still reproducing the image.

However, using an electronic viewfinder comes with some benefits – for example, the image you see in an EVF camera will change when you adjust the exposure so you can see how what you are changing will affect the final image.

OVF cameras are limited to only what the lens is looking at, so any settings you change won’t change the look of the image in the viewfinder – only the final image.

Plus, because EVFs are essentially mini-LCD screens, you can playback footage from the viewfinder directly instead of using a pop-out LCD screen that could be hard to see during daylight shooting situations.

Both kinds of viewfinders include overlay displays that provide some information for the photographer or videographer to use when composing their shot.

OVF cameras will usually provide the aperture and ISO settings, as well as a box that defines the outer frame of the image to determine how much information the photographer sees is actually being picked up for the final shot.

EVFs, meanwhile, have additional menus that can be accessed directly through the viewfinder, including displays that help adjust the image the EVF is producing, adjusting for brightness and sharpness of the image as an example.

There are also “quick menus” the photographer or videographer can access from the viewfinder to adjust all the other options without having to pop out an LCD screen and scroll through like one would on a DSLR.

But wait – don’t digital cameras have both OVFs and EVFs?

Yes, that’s technically correct. The LCD screens on a DSLR camera are technically electronic viewfinders, and many cinema cameras use an EVF at eye level as well as a higher resolution monitor you can attach to the side of the camera as an EVF as well.

There are even some cameras that use a hybrid viewfinder. In these instances, a mirrored prism reflects the image to the OVF so the photographer or videographer can see the frame and data from the overlay, or can be turned off and become completely EVF using a mechanism that changes the prism into a mirror.

”Block” cameras such as those from RED or Z cam and Kinefinity doesn’t come with a viewfinder from the start. They’re modular cameras meaning you build the camera from the basic ”brain” – or block – to suit your need. So you can add a viewfinder if you need it – or you might choose to skip it and use an external monitor instead.

Mirrorless cameras, like the Nikon Z-series, Sony A7 series or Panasonic GH5, are EVF only and don’t have any kind of optical viewfinder option.

Why viewfinders matter – besides the obvious

Let’s get this out of the way – viewfinders are great because they help you see the image you are shooting! But why else are they important? It depends on what type of viewfinder you are talking about.

OVFs are great because they allow you to see what the camera is seeing. It shows you the whole frame, even beyond the frame, and reveals the world how it really looks.

Even though you can’t see how the shot is going to look in its final form with the current settings, if you know your camera and how it looks, you can use the overlay to adjust your aperture and ISO right there in the viewfinder – an endlessly helpful tool, especially if you are shooting an active scene, be it a sports game, wildlife in nature, or an adventurous moment.

EVFs, meanwhile, provide so much more value with additional menus you can access right in the viewfinder, making it easier to adjust what you are doing and actually see the results of those adjustments and how it affects the final frame.

Viewfinders are most important because they help the camera feel like an extension of you, and your vision.

By literally putting your eye to the viewfinder, it’s as if the camera is your eye now.

Thinking of the camera as an extension of you makes your actions more fluid, and keeps you more focused and glued to your work – making you more likely to get the right timing to capture those perfect shots.

In my opinion, this mentality is the difference between holding your work at arm’s length and making it personal – figuratively and literally.