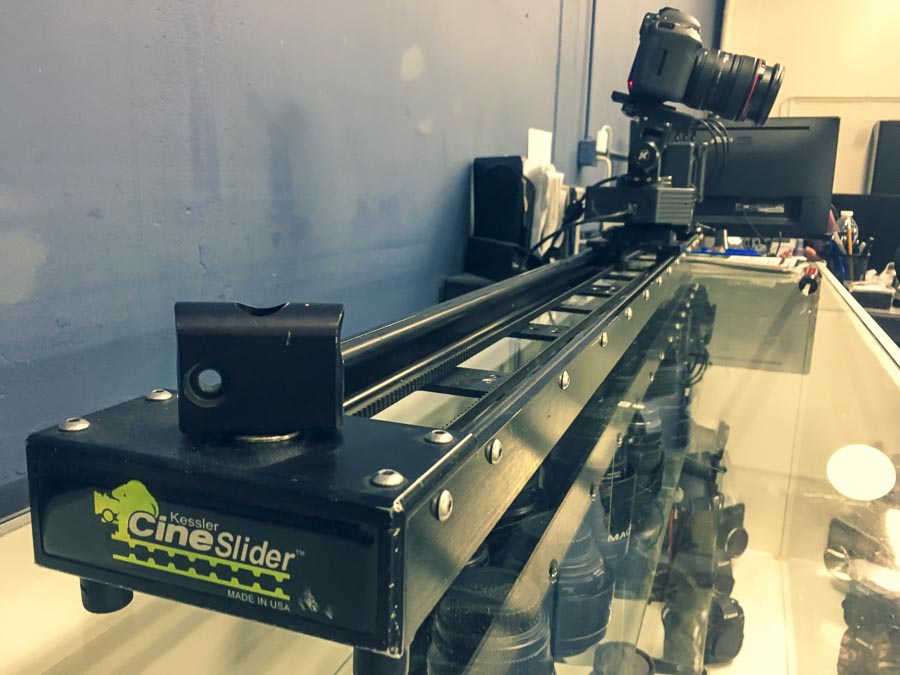 Over the past year, I have done several shoots for a history documentary.

The director wondered how we could make the classic talking head interview more visually engaging while keeping our crew small.

She asked me to research motorized sliders which, in theory, would offer dynamic camera movement without multiple operators.

Interviews regularly use two or more cameras to allow for easier editing. The director wanted to elevate the production value in a simple, elegant way that would engage viewers with a subject (history) that is often characterized as dry and boring.

Using motorized sliders added the perfect amount of subtle motion without being distracting to the viewer.

Why we settled on the Kessler Second Shooter Plus for Interviews

To begin the project, I researched which slider options were available to rent where we’d be filming.

We originally wanted to use three cameras on three sliders but finding that many identical units for our dates and on our budget were quite a challenge.

It was the start of the project so committing to buying equipment for the film and locking into a style we hadn’t tried yet wasn’t on the table either.

Ultimately, we chose the widely available Kessler Second Shooter Plus on a 3’ Kessler slider because these were the right match of function and budget for this production.

What is the Kessler Second Shooter Plus?

The Kessler Second Shooter and 2nd Shooter Plus are motorized motion control systems that can be added to compatible Kessler sliders.

Each model comes in several different lengths and the Second Shooter should be compatible with all lengths but double-check with the Kessler website to make sure yours is compatible.

The main components are:

If battery power is needed, Kessler’s MagPak batteries can easily clip on or a D-tap adapter can be used with other batteries.

The Second Shooter allows for precise and repeatable movements that are unattainable through manual operation of a slider. It has a built-in intervalometer that connects to your camera and is a great option for adding motion to time-lapse and stop-motion projects.

The Plus can be operated using the kOS system on iPad, Windows and Mac machines over wifi, whereas the original Kessler Second Shooter needs to be connected to a computer with a USB cable in order to utilize kOS.

The Second Shooter has a weight limitation of 10 pounds / 4.5 kgs so it works best with smaller cameras and lighter builds.

We settled on using two small cameras, Panasonic GH5s, on the sliders. Our third camera was the Panasonic Varicam LT on a tripod with a zoom lens which allowed us to change up compositions.

Hands-on test of the Kessler Second Shooter Plus

When looking to buy or rent a slider, there are several factors to consider.

If you want to buy or rent a slider, I recommend you read our article Best Professional Camera Sliders For Any Budget, which includes a guide to sliders along with recommendations of sliders for different budgets.

With the Kessler Second Shooter Plus these were the things I tested:

I first tested the Kessler in a rental house and sent some footage to the director. I made note of the sound coming from the motor as a potential issue for audio.

The motor has a quiet mode which is very handy but does limit the top speed of the unit. This just meant that setting up our shots took a little bit longer.

Also, even with the quiet mode, the motor on some units is still audible so it’s smart to check with the sound recordist and be prepared to carefully blimp the motor without interfering with its movement.

I made some test footage, taken at different focal lengths and sent the clips to the director. I detected a slight jitter and mechanical quality to some of footage, despite it being on a very stable surface.

But after reviewing other footage taken on these, including official sample footage, I realized this may be an inherent quality of the motion of these motorized sliders.

It’s subject to taste — I also don’t like the look of pans and tilts on gimbals and drones and unnoticeable to many (including our director who thought it looked great).

To achieve the smoothest shots possible with the Second Shooter, it will ideally be mounted with multiple points of contact and using sandbags. The slider and Second Shooter components need to be handled and stored carefully.

Cases are not typically included when purchasing these items but Kessler makes cases that can be purchased separately.

Keeping the Interviewee in Focus

My other concern was the focus which has less to do with the slider and more to do with our crew and camera options.

Since having a smaller crew was important, we weren’t able to have a focus puller for each camera. Would the autofocus on the GH5 work well in this scenario?

Despite testing various settings, the autofocus was not reliable. Perhaps with something like the Canon C200, which is at the top of the field for autofocus, this setup would work well.

We didn’t have access to C200s so, in the field, I adjusted the angle of the sliders so that the distance of the camera and subject didn’t change drastically. This allowed us to set and maintain the focus while still having sufficient movement.

This was the best solution given our constraints but there are kits with optional programmable focus motors like the Kessler Cinedrive and the Rhino Arc II system.

Building the Kessler Second Shooter Plus

Building the Second Shooter was fairly easy given that Kessler provides great how-to instructions on their website. There is a downloadable manual with simple instructions and very clear photos that identify parts.

There’s also a series of videos that demonstrate the different functions of the Second Shooter.

We set up one of our sliders centered on a single tripod with a half-ball leveler and ⅜” screw.

Included in that package were two tripod stability arms, which mounted on the ends of the slider and then clamped onto the tripod legs.

Multiple points of contact ensured that as the camera moved to the ends of the slider, the weight distribution didn’t destabilize the setup or cause it to become unlevel. The half-ball allowed us to quickly level the whole setup.

We used a torpedo bubble level with the camera in a few different positions to make sure everything stayed level throughout the move.

For the other slider, we used two separate tripods with standard ball heads mounted on each end and nested the legs.

Once the sliders and the cameras were built and ready to go, we finessed our angles, made sure everything was perfectly level and began testing our runs.

The whole system involves a lot of cables and a moving object.

It’s not really possible to have a clean build because the cables need enough slack to move for the entire run of the slider without getting tangled or yanked out of place.

You also want to make sure they aren’t dragging or creating too much friction at any point.

The three controls – slide, pan and tilt each has its own connection. They use ethernet cables that have plastic connectors with little tabs that lock into place. These can wear out after a while.

The upside is that ethernet cables are relatively inexpensive to replace. Test out your cables and get some backups.

To make our build even messier, I hard-lined power to our cameras because we were indoors and I didn’t want to add battery swapping and charging to the mix

One intriguing solution to this is the Kessler Time Lapse System, which mounts the motor, controller and power supply to the head so that it all moves in one tidier unit.

Trouble with one of the Sliders

At one point during our shoot, one of the Second Shooters went completely haywire and started spinning round and round as if it had been possessed. Cables were getting wrapped up in it like shoelaces in bike gears.

Fortunately, we were able to pull the power before any damage was done and it never happened again but so much for not distracting the interviewees.

With the Second Shooter, you can set two or three keyframes.

I found that three keyframes gave us the most control for maintaining our desired compositions.

You want to make sure you like the full arc of the move, and if you only program the beginning and end, the middle might not be so great. It’s important to watch each camera’s full move.

This can take a while if you are doing slower movements but it’s better than interrupting the interview.

The Second Shooter allows you to set the speed in seconds and the ramp speed in percentage.

Ramp speed refers to how quickly it goes from stillness at the end of the slider to its full speed during the bulk of the track.

I preferred a slower motion and smooth starts and stops so I used a slower speed and a 10-15% ramp speed.

The Kessler Second Shooter Plus is a great piece of technology and one I’d like to experiment with more.

Using rentals rather than buying new, identical units and support setups meant a lot of improvising and adjusting to the various conditions the equipment came in.

Over the different shoots, we used three Second Shooters and sliders.

One slider tragically had a very tiny nick that we didn’t see at checkout. As we tested the run, it showed up as a slight bump.

Fortunately, this can probably be cut around using the other angles or smoothed out in post but it emphasizes the importance of properly storing and caring for equipment.

I would love to do more tests and see if this setup can be refined even more but I’d also like to test out higher-end units to see if there is a notable difference in quality.

Having perfect, repeatable movement without a grip or operator running a dolly back and forth endlessly is a fantastic option.

The Second Shooter Plus does this really, really well. While I cannot share footage from these shoots, there are many samples online that demonstrate how adding motion livens up an interview.

Practically speaking, there is a temptation to use these to replace crew members. While having a smaller crew has budget perks and is potentially less daunting for subjects, it means longer set up times and fewer eyes to monitor for imperfections in each angle.

If considering doing a shoot similar to this, make sure you have plenty of time for testing, re-checking angles and adjusting.

Motion control for cameras is an area of exciting innovation that ranges from relatively inexpensive motorized sliders to high-end robotic arms.

There are many applications and areas for experimentation that range from stunning timelapses in nature films to outrageously dynamic food commercials.

The Kessler Second Shooter Plus is a solid and simple to use entry point into motion control and you can get really great results.

Rachel Bardin is an award-winning director and cinematographer of documentaries and narratives. Her films have played at the American Society of Cinematographers, Austin Film Festival, PBS Online Film Festival, and IFFBoston. Originally from Florida, she received her MFA from the University of Texas at Austin and now lives and works in Los Angeles.