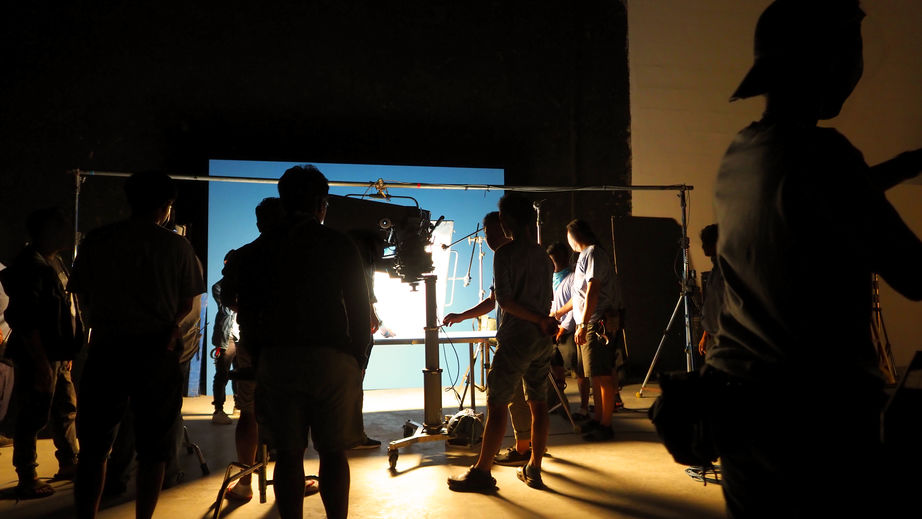 Over the last two decades, green screens have gone from uncommon novelty used solely on VFX-heavy films, to staple of cinema on even the most minute budgets.

And while ‘green screen’, like ‘CGI’, ‘mo-cap’, and other well-known filmmaking terms, has successfully permeated the mainstream culture, very few people can, in actuality, describe what it does.

So, in this article we’ll discuss the general idea behind the green and blue screens, and what they allow filmmakers to achieve. And we will answer the two-part question, what is a green screen and how does it work?

In short, a green screen is simply a highly saturated, colored screen designed to purposefully clash with whatever is in front of it. This helps VFX teams paint out the specific background color (very bright green in this case) and replace it with the desired image or video, giving the illusion that the subject is in a different setting. Green screens are not limited to backgrounds (or to the color green) but can stretch to any object in the space, as long as it is coated in the same color being painted out.

So, welcome to ‘Intro to Green Screens, Part 1’. Have a seat and let’s dive into more detail below.

What Is A Green Screen?

A green screen is just what its name suggests: a green colored screen. Most commonly made of nylon to prevent creasing and folding, green screens are simply long blankets of fabric mounted or clamped tautly to a stand.

Green screens can range in size from a small background screen mounted behind a solitary subject to an entire soundstage coated top to bottom. Usually, they are colored in the most saturated, garish green color, and there’s a good reason for that which we will discuss later on.

Green screens serve as a temporary stand-in for visual effects that will be painted into the frame in post-production. The screens are most often used for background replacement in talking-head segments or informative videos with a subject in the foreground presenting.

Green screens can also coat objects strewn about the set: tables, chairs, in short, any prop or object that can be interacted with by an actor. These are then replaced in post-production by the effects team.

Most editing platforms today have a functionality called chroma key.

In other words, chroma keying works by identifying a specific color chosen by you, and then essentially deleting that color from the shot and replacing it with a particular image or video of your choice.

In this way, you can add in backgrounds that give the illusion of your subject(s) being in a different setting, or simply make a fancy graphic mimicking something like a news segment.

The chroma key functionality will usually have a few bits and bobs that allow you to tweak just how sensitive the color sensor is, or how soft or hard the edges will be, helping to make a realistic replacement background if that’s what you’re looking for.

If you want to take things to the next level, a complete green screen soundstage can even coat objects on your set.

For inspiration, here’s a video from Fame Focus with a lot of clips from big Hollywood blockbusters, which compare the before and after shots of green screen and VFX:

Green screen objects, props, even a suit for people to wear. All of this can then be painted out.

Usually, this type of work will require a heftier VFX team to substitute all the objects you’re wanting to chroma key out, but the basic principle is the same as the simple background overlay mentioned above.

Why A Green Screen Is Green

Since the chroma key software works off the principle of deleting a specific color from the frame, that color should be something uncommon.

The bright, highly saturated green color used in green screen manufacture is generally unique enough so as to not be found in clothing or objects. No one has eyes that green and certainly no one’s skin tone will match (until we start casting Martians). This makes it easy to control the chroma key without worrying about phasing out part of the actor’s face or body.

If a green screen weren’t green, but, say, black or red, the likelihood of the software identifying portions of your scene that you don’t want to be erased would be much higher. So, for the most practical of reasons, a green screen should be, well, green.

He does, does he? Well, that’s ok too so long as you know the tradeoffs between blue and green.

When To Use A Green Screen Instead Of A Blue

Are you shooting film or digital? If sticking with that trusty DSLR or pro-level digital rig, then green is the way to go because it processes more smoothly than blue in-camera.

When keying the color out, it also results in much less noise and grain than blue in digital footage, resulting in a cleaner looking, more complete keying.

Green is much less prevalent in the wardrobe and color scheme of objects. You’ll generally have an easier time keying what you want and leaving what you don’t with green over blue.

Green is better for daytime shoots bathed in bright lighting.

When To Use A True Blue Screen

A blue screen requires more light due to its darker hue, but, thanks to this lower luminosity, it’s better for simulating night-time shots.

Keep aware though that you’ll need twice as much light – or a whole f-stop – to light a blue screen compared to green.

Even though you’ll be keying the color out in post-production it won’t change the fact that you’ll have a big colored screen reflecting the lights you’ve got illuminating your set. This will inevitably create color spill.

Green screen’s spillage in particular results in a strange colored halo around the edges of your actors that looks muddy and fake, which is usually combated by creating sufficient distance between your talent and the screen.

A blue screen normally has less spillage than green and therefore makes color correction much easier while editing.

Usually, there’s a bigger chance that people are wearing something blue, than something of the bright green color of a green screen.

How To Light A Green Screen

No matter what color you choose, for a green screen to work properly, you need to make sure it’s lit well.

Here are three pieces of advice, which will help you pull a good key:

1. Separate The Subject From The Background With Lights

This means the screen needs its own set of dedicated lights separate from whatever is lighting your subject.

Having separate lights for the green screen and your subject serves two purposes: to crisply separate your subject from the screen (foreground from background) and to have the screen uniformly lit with no shadows.

You need lights which are soft. Hard lighting will create a bright cone of light in the center. This will result in bright green spots with a fall-off to darker greens on the muslin backdrop, which will make it difficult to key out the green screen in post-production.

Remember, you want a soft, even lighting on your backdrop, so you need lights with big softboxes or umbrellas, which act as diffusers and spread out the light evenly.

Chroma keying identifies the color at a specific hue and brightness. If you can make the entire screen conform to that, then keying will be easier than if there are lighter and darker patches due to a shoddy lighting setup.

3. Avoid Creases And Wrinkles On Your Green Screen Backdrop

You want to do what you can to make your life easier in post. If your green screen has creases and shadows, then the software sliders will have to be adjusted to allow for more shades of green, which might begin to bleed over into your subjects, making it harder for you to clearly key out just the background.

A good way to avoid creasing and shadows if your lighting setup is already as bright as can be is to make sure the screen is stretched as tightly as possible over its frame or between its two stands. This will flatten out the fabric and get you a smoother, more uniform look.

Here’s a great video from Green Screen Outlet which explains in more detail how to properly light a green screen:

How Much Does A Green Screen Cost?

Not much, actually! Most standard green screen kits are pretty affordable by filmmaking standards.

Here are a few good ones to check out, if you need just an affordable green muslin backdrop and background support:

And here are some great deals, which want a cheap complete kit with green screen, background support, and a complete lighting kit:

If you prefer a foldable ‘pop-out’ green screen you should this one from Fovitec, which also includes a blue screen on the other side:

And finally if you want a foldable option, which is super fast to set up and hide away again, which includes a stand, you should check out this YouTubers favorite from Elgato:

If you’re interested in working with green screens and dabbling in chroma keying your footage, these are some good starter screens to cut your teeth on and get familiar.

Still too expensive for you? There are some great DIY options out there as well, the cheapest being green construction paper from any art store.

Simply buy as many sheets as you need and tape them together on your wall, taking care that the edges don’t stick out, and voila.

Even certain smooth-grade cardboard or green bedsheets will work.

DIY may not work as well as the store-bought options listed above, but they’re a decent way to at least get your feet wet and mess around with some keying without breaking the bank.

Here are a few ideas to try out:

See You Next Time

Congratulations! You’ve survived your first class—Intro to Green Screens, and there’s no final exam either.

Now you’re ready to proceed to my next article Guide: How To Shoot And Key Green Screen Footage, which covers the practical aspects of using green screens: how to set up, light, and shoot green screen footage, and how to go about chroma keying during your edit, step by step.

Have some questions or tips on green screen use or products? Have some tips or advice to add? Drop a comment below and join the conversation!