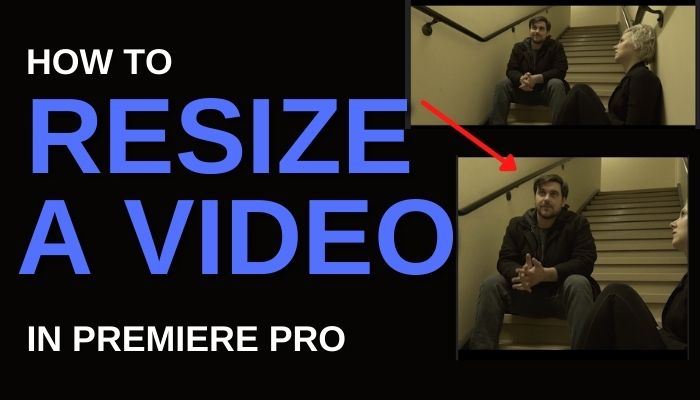 At one point or another, you will need to resize a video file while editing a project. There are multiple reasons you would need to, such as resolutions not matching your desired timeline, correcting a poorly framed shot, etc. The list of reasons can go on forever.

This article will dig into several methods of how to change the size of a video in Premiere Pro, how changing the size of the video can affect image quality, and examples of when and why you would want to resize a video.

First, let’s quickly learn how to resize a video inside of Premiere.

There are a few methods for resizing videos on your timeline.

I want this image to take up the entire 16:9 frame instead of having a letterbox (black bars) around the image.

Note you may have to change the position of the image if you do not like the framing.

You can also change the height and width individually by unchecking Uniform Scale. This can cause your image to look stretched, so use only when needed.

2. The next option is to use the Scale to Frame Size or Set to Frame Size. You can find these options by right-clicking your video on the timeline.

Scale to Frame Size will resample the image to fit inside of the timeline’s aspect ratio. Resampling is when the aspect ratio of the original image will change based on the new sizing.

Set to Frame Size will fit the entire image inside the new sequence’s aspect ratio.

Let’s look at an extreme example to see how both of these work.

By hitting Set to Frame Size, you can see Premiere scales the entire video to fit within the timeline’s aspect ratio.

Which option you use will depend on your preference and your project. We will get into use cases in a later section.

3. The last method is to use the Transform effect in Premiere. You can find this on the Project Panel under Effects > Distort > Transform.

It works the same way as changing the scaling on the Effect Controls tab. This is just an additional method if you don’t want to change the actual video’s properties.

Now let’s learn about resolution and aspect ratios to understand how this can affect the image.

The resolution of a video is defined by the number of pixels within the video. A pixel is information about the image, such as the color, luminance, etc.

A group of pixels will effectively display your desired image.

For Instance, when you take a video on your cell phone, you’re actually taking a video of data the phone collects to display an image. So how does the image sizing work?

Think of your video like a house. A house in the US is typically measured in square footage. Resolution is like the square footage of a video. The most common resolution for HD videos is 1920 x 1080 pixels.

This pixel ratio can also be expressed in its aspect ratio. The aspect ratio is the size of the image. For instance, the standard aspect ratio for televisions and computers today is 16:9. It used to be defined in 4:3 before HD became the new norm. See the images below for how these two aspect ratios would look.

As you can see, the 16:9 is more in the shape of your standard TV today, and the 4:3 is in more of a square shape used on older TVs.

We won’t get into why 16:9 is the standard, but know that this is the most common aspect ratio used today on TV, YouTube videos, video games, etc.

Which resolution and aspect ratio you use will be highly dependent on your project. Movies are shown in theaters typically use 1.85:1  and 2.35:1. Instagram will commonly use a 1:1 aspect ratio.  As you can see, there are multiple reasons why you want to choose a specific aspect ratio.

Let’s apply this knowledge inside of Premiere Pro now that you understand resolutions and aspect ratios.

A display will pop up with some presets equipped inside of Premiere. Let’s use something more custom so we can learn how to change these settings ourselves. Go to the Settings tab in the New Sequence Window.

I’m just going to focus on the resolution and aspect ratio for this article. So I’ll leave the timebase (frame rate), color space, etc., as it is.

The Frame Size in the Video section is where we want to put our focus. Here is where we can input the information mentioned earlier.

Resolution is displayed in the Horizontal by Vertical format, so 1920 will be horizontal, and 1080 will be vertical. Enter this information in the appropriate box.

Notice that the 16:9 aspect ratio we mentioned earlier is displayed next to the boxes where we entered the pixel information.

We have created our timeline with the desired pixel and aspect ratio. However, what if we want to change this information later to something else?

You can easily do this by right-clicking your timeline in the Project Panel and hitting Sequence Settings. This will display the same Settings tab used earlier to create the timeline. For example, if you want to change the timeline to 16:9 4K resolution, enter 3840 x 2160 into the resolution boxes.

When you change the size of the video on your timeline, you are Upscaling or Downscaling the image. Let’s briefly talk about what each of these means and how they can affect your video.

Upscaling and downscaling your video have a literal meaning: to increase or decrease the scaling of the image.

This will impact your video regardless of what method you need to use.

For instance, upscaling your image from 1920 x 1080 to 3840 x 2160 will decrease the image quality because you’re essentially stretching the existing pixels. Upscaling the image too much will make the video less sharp and can create an ugly compressed look.

This is not to say you shouldn’t upscale a 1080 video to 4K. Hollywood does it all of the time with older movies. However, you should be aware that upscaling or downscaling will change the video’s image quality.

Let’s now look at some examples of why you should resize a video.

Examples of Why You Should Resize a Video

There are many reasons you want to change the scaling of a video, but here are a few examples of why you would want to.

These are some of the most common issues I run into when I need to resize an image. Many more are not listed, but you should have a good grasp of the why.

You can create a preset inside of Premiere if you find yourself using a scaling method consistently. Set your scaling preferences in the Effect Controls tab, right-click Motion above the Scaling option, and hit Save Preset.

This will be saved in your presets, which you can easily apply to other videos by dragging it directly onto the clip.

As you can see, there’s a lot of different reasons why you may want to resize a video on your timeline.

Some filmmakers like Wes Anderson will use specific aspect ratios as part of his storytelling, while others may need to remove an area of a shot they don’t want to see.

Learning how to resize videos properly is an important tool to add your skillset as a video editor.