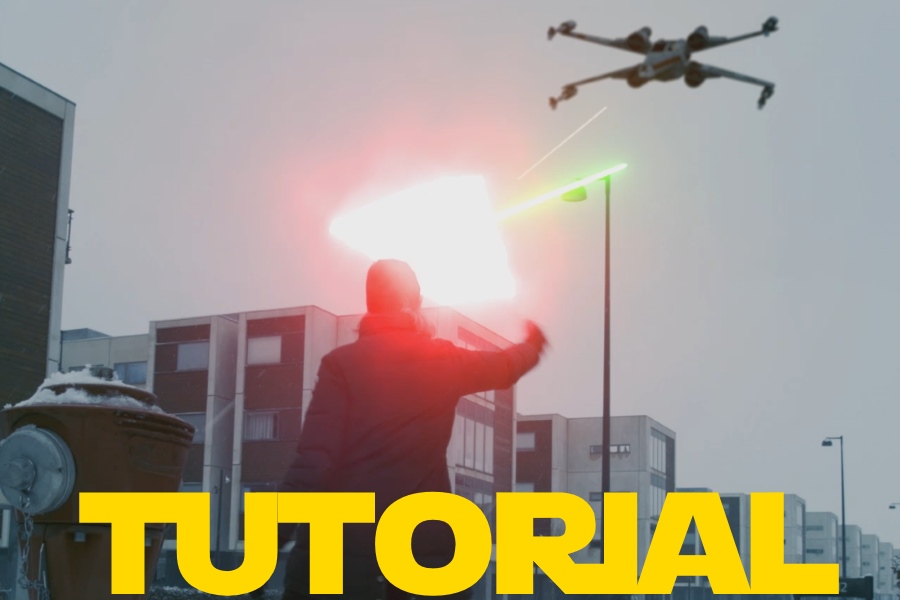 You can’t claim to be a filmmaker if you haven’t at some point tried to make a scene with a lightsaber!

The lightsaber has become such a cultural icon since it was first shown on the big screen in 1977, and a lot of filmmakers have tried to duplicate the effect through the years.

I’m no different! And I’m lucky because it has become so easy to do these days, thanks to Adobe After Effects and an awesome plugin called SABER from Video CoPilot.

So I bought this cheap plastic lightsaber on Amazon, which had a blue plastic blade, which was easy to see. You can get much more luxurious and expensive ones, of course, but this was just to be a quick fun test, so I didn’t want to go overboard on Jedi merchandise.

I had hoped that my two-year-old son would play the role of Kylo Ren. But the snow had just fallen here in Denmark, so he just looked at me like, ‘u crazy! I’m gonna build a snowman’.

So instead I kept nagging and pestering my girlfriend to take on the role until she finally, reluctantly, agreed.

The shooting of the video took 5 minutes, and then I spent two nights on animating the lightsaber and X-wing. And I’ve broken down the process in the video above.

I decided to make the video in a square format, so I could share it on FB or Instagram.

As I say in the video, I promised to put a link to the plug-ins, fonts, and sound effects, I’ve used in the film. So here they are:

*Some of the names included on this page are registered trademarks of Lucasfilm and used here under Fair Use for educational purposes.

Also, this is the first tutorial I’ve ever done, so please comment, share, critique, and help me improve.

I hope you find it useful. Feel free to share a link to any of your own SW fan films in the comment section below.