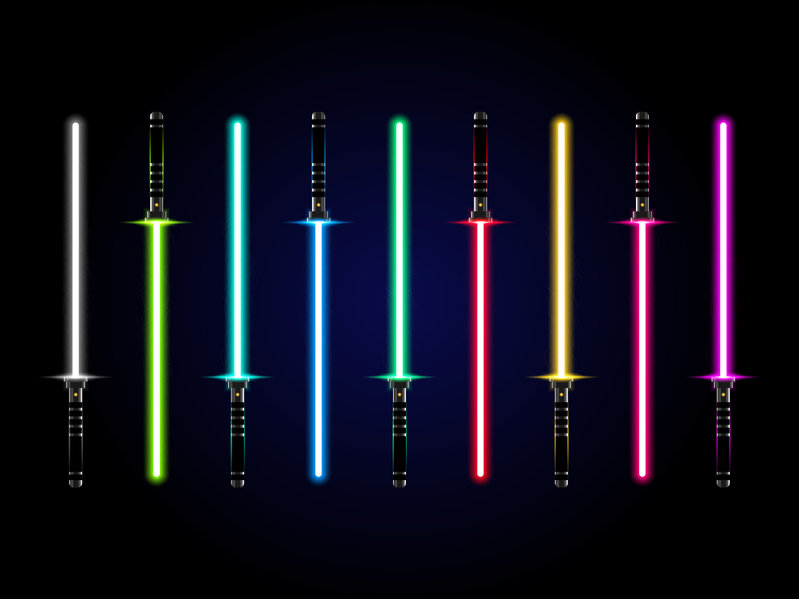 So the other day, when my kid and I were playing a LEGO Star Wars video game, he asked the question every parent has to face at some point: “Dad, why is Yoda’s lightsaber green?”

Being a long-time Star Wars fan and having played with every plastic toy George Lucas threw on the market in the early 1980s, I was more than happy to explain.

“Sit down, Youngling,” I said, “and I shall explain to you about Kyber crystals, lightsabers, and the way of The Force. Just don’t ever ask me about Midi-Chlorians! EVER!”

Oh, but first, check out the best Yoda quotes here, you must.

I could see on my young Padawan’s face that I had gotten his attention. And thus, my tale began: “A long time ago in a galaxy far, far away…”

What color lightsabers are there?

Historically, the Jedis have created lightsabers in every hue imaginable. However, there is a range of lightsaber colors that are more common than others.

Check out this tutorial on how to create a lightsaber effect in Adobe After Effects.

The most common lightsaber colors are:

The most common lightsaber colors are blue, red, and green, followed by yellow and purple.

What is the rarest lightsaber color?

The rarest lightsaber color is black and is known as a Darksaber. Tarre Vizsla created it – the first Mandalorian ever inducted into the Jedi order. For years it was kept safe at the Jedi Temple.

The lightsaber was shorter than most and shaped like a regular sword with a pointed blade.

When the Old Republic fell, it was stolen by Mandalorian warriors, and many Jedis died by its blade. During the Clone Wars, it fell into the hands of Pre Vizsla – the leader of the terrorist organization known as Death Watch.

Check out the best quotes – yes! they DO exist! – from Jar Jar Binks here.

How does a lightsaber get its color?

Most lightsabers get their colors from the Kyber Crystals at their core.

So what exactly is a Kyber Crystal?

Kyber crystals are used as focusing crystals, the power source in a lightsaber. Therefore, they’re also known as lightsaber crystals.

A crystal is just a rock in someone not attuned to the force. And, in Legends, both Jedis and Sith lords have used other materials – from Kunda stones’ physical remains to glass – as the power source.

But in the Star Wars canon, lightsaber crystals are all Kyber, as far as I know.

Each material gave the lightsaber different colors and special powers.

Check out The Empire Strikes Back behind-the-scenes resurfaced footage.

Kyber crystals in Rogue One

In Star Wars: Rogue One, Kyber crystal mining on the planet Jedha is the source of the battle between Imperial and Partisan forces. And our hero Jyn Erso wears a Kyber crystal pendant on her necklace.

In the official Star Wars canon, lightsaber colors don’t have a meaning per se.

That being said, Siths usually use red lightsabers, and the good guys use blue, green, or yellow. That’s why those colors are the ones we see the most on-screen.

In Star Wars Legends, the Jedi are divided into three branches: Guardians, Consulars, and Sentinels.

Here’s a table that compares the major lightsaber color classes, their meaning, and some examples of characters who uses them:

“So there you have it my young Padawan”, I said. But I could see from the look in his eyes, that I had lost him somewhere around double-bladed lightsabers.

After a while, he said, “Dad, can the Jedi also use double-bladed Saberstaffs and shoot lightning from their fingertips?”

I explained how that was only reserved for The Dark Side.

“Cool”, he said, “Then I definitely know what I’m gonna choose when I grow up. By the way… what are those miti-condrians anyway?”