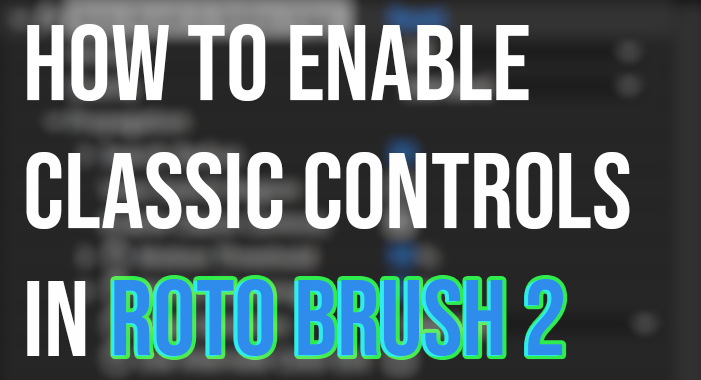 If you’re new to rotoscoping in After Effects, I suggest you read How To Roto Brush In After Effects. Illustrated Tutorial. Part 1 first.

If you’re working with Roto Brush 2 in After Effects, you might find you miss some of the features from Roto Brush 1. Don’t worry.

If you want to turn on the finer control options for propagation and edge detection, you can easily do so.

In other words, choosing Classic doesn’t roll back the Roto Brush 2 to the less good algorithm of 1.0 but allows for finer control. I.e., you get the best of both worlds.

Enabling the classic controls in Roto Brush 2 is pretty straightforward.

In the Effect Control panel for your roto brush layer you simply click Enable Classic Controls under the Propagation settings, like so:

Now you can start fintuning your roto edge settings for motion while still taking advantage of the improved algorthim of Roto Brush 2.

Here’s a quick rundown of the classic controls.

This is how to do it if you want to use the improved Roto Brush v2 algorithm while taking advantage of the finer controls from v1. Now let’s look at how to use the Roto Brush v1 algorithm to avoid compatibility issues.

How to still use Roto Brush v1 algorithm:

Now, if you’re working on a project, which already uses version 1 of Roto Brush, you might want to continue using that.

In the effects control panel, choose Roto Brush 1.0 (Classic) under “Version” for the layer you’ve applied to the Roto Brush tool to.

Doing this rolls back Roto Brush to the old algorithm, which I don’t find nearly as good as Roto Brush 2.

But if you need to continue working on an older project, using v1 can prove useful to avoid compatibility issues – especially if you’re sharing your project with someone working in AE v17.1.4 or earlier.

That’s it. If you’ve got any questions, let me know in the comment section below.