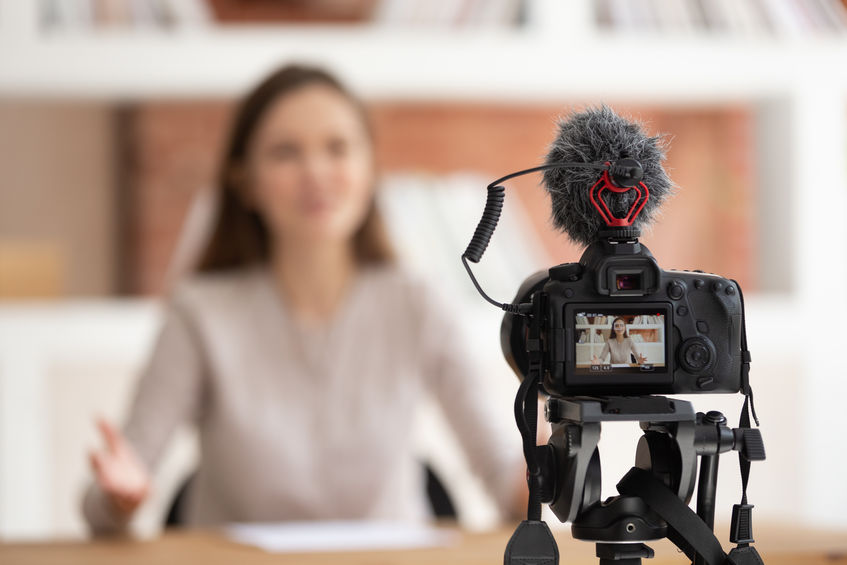 Microphone input and flip screen are a couple of the best features to look for on a vlogging camera. And luckily, there are affordable options available that are both beginner-friendly and budget-friendly at the same time.

The solution is to find a camera with a mic input that will accept an external microphone such as a (wireless) lavalier or an on-camera mic.

Along with a mic input, consider getting a camera with a flip screen and a reliable autofocus system. These features help you produce better content for your vlog with minimal effort.

So, what is the best vlogging camera with mic input and a flip screen that doesn’t break the bank? Here are seven of the top recommendations.

If you find that you want to spend a little more after browsing through this list, have a look at the Best Budget-Friendly YouTube Vlogging Cameras With A Flip Screen, which offers slightly more mid-range options.

The Canon PowerShot is easily one of the top vlogging cameras available. It includes many of the features that vloggers look for, including a flip screen, mic input, video streaming, and 4K video support.

The PowerShot is a powerful camera with a three-inch touch panel LCD screen that rotates 180-degrees for selfies. It also features advanced optical image stabilization and autofocus to help keep your video crisp and clear.

The one drawback is the price. The Canon PowerShot is one of the more expensive vlogging cameras, but the higher price tag allows you to shoot cinematic 4K video at 30 frames per second.

The Panasonic LUMIX FZ300 is a close runner-up to the Canon PowerShot, as it offers 4K video at 30 frames per second, an external mic input, and advanced optical image stabilization.

The LUMIX FZ300 is a premium DSLR camera with a rugged, dustproof design. It is a great option for those who film content for their vlogs outdoors or in extreme conditions. Compared to the PowerShot, the LUMIX FZ300 is likely to break when dropped.

You can also capture great footage with this camera. It includes a high-quality camera sensor and can snap 12.1-megapixel photos. You also get a three-inch rear flip screen for composing your shot from in front of the camera.

While most vloggers use DSLR cameras, camcorders still provide a suitable option. The Sony HDRCX455/B is an HD camcorder with a quality ZEISS lens.

It is a little more versatile than a typical DSLR camera, thanks to its variety of built-in features. It includes 30x optical zoom, 350x digital zoom, Wi-Fi connectivity, 8GB of internal memory, and image stabilization.

The Canon EOS M50 is another high-end vlogging camera for those who want to capture crisp, clear 4K footage.

As with the PowerShot, the camera has advanced autofocus, image stabilization, and a wide range of settings to play around with.

Of course, the most important features include the external mic input and a hot shoe for mounting the mic. The camera also has a swivel screen that rotates 180-degrees for viewing the scene from in front of the camera.

The price tag is a little high, but within the same range as the PowerShot and the Panasonic LUMIX. The higher price is due to the quality components, from the lens to the DIGIC 8 image processor and the APS C CMOS sensor. Even in low light settings, you should get more vibrant colors and sharper video.

The Olympus PEN E-PL10 is a vlogging camera that comes packed with essential features, including a 180-degree rotatable screen and optical image stabilization. It also has a hot shoe for connecting an external microphone or a flash.

The camera records 4K video at 30 frames per second and can capture 1080p HD video at 60 frames per second. It is a reliable little camera with two main benefits. When you flip the screen to the side, it automatically switches to selfie mode. It also has an intuitive touch AF system that quickly focuses on the subject, even when filming moving subjects.

The Olympus PEN E-PL10 costs slightly less compared to the Canon and Panasonic cameras but is still a relatively expensive camera.

Unlike the previous options, the ROSDECA digital vlogging camera does not come from a name brand camera manufacturer. So don’t expect top performance–use it as a cheap way to test out if vlogging is something for you before investing in more expensive gear.

It is a budget vlogging camera. However, it provides a basic solution for those who want a camera with a flip screen and support for an external mic.

The camera resembles the PowerShot, as it is compact and sleek. The flip screen opens to the side and provides a clear view when filming yourself.

One potential drawback is that this camera only records 1080p HD footage instead of 4K. It also offers poor performance in low-light settings due to the inexpensive camera sensor, a tradeoff that comes with a more affordable price.

If you want an extremely affordable video camera with a mic and flip screen, try this budget camcorder from ALSONE.

It is a generic camcorder sold under dozens of brand names. However, it includes various useful features, including a large flip screen, a remote, and a microphone.

The camera includes a mic input and a hot shoe, which support the provided microphone. The mic includes a windscreen for clearer audio when filming outdoors.

The main limitation is the resolution of the camera. The camera only records 1080p video at 30 frames per second.

Don’t expect a high-quality camcorder–there are way better choices on the market. But if you’re a beginner just starting out with vlogging, and you just want to test the waters, this is an inexpensive and easy way to get started.

To choose the right vlogging camera, think about the features that matter most to you.

If you want to shoot 4K video, you can expect to spend a little more on your camera.

If you want a camera with a flip screen and an external mic, consider going with one of the more affordable options.