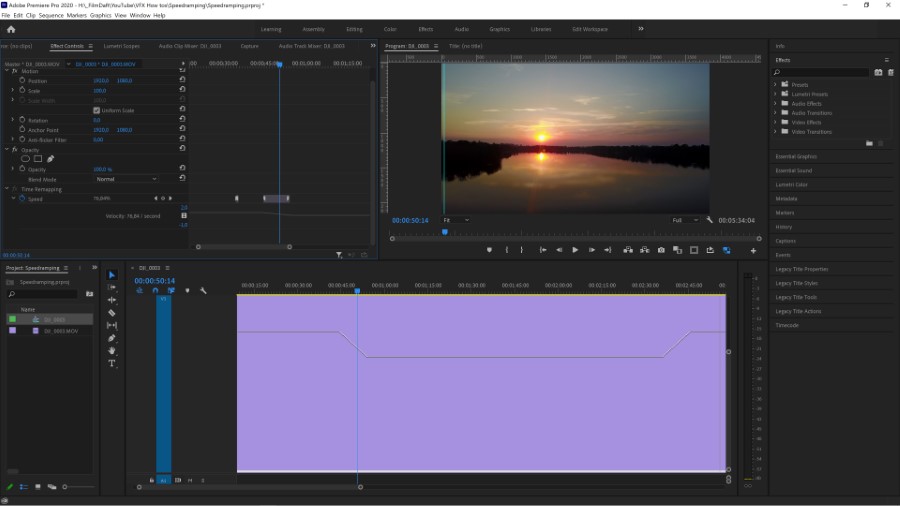 Have you ever watched a video online and marveled at the cool timing of a shot as it speeds up and slows down in perfect rhythm to the music?

You might think this is a simple slow-motion effect, but it’s actually a slightly different technique called speed ramping.

Speed ramping is a technique used to adjust the speed of your clip, to speed up and then slow down your shots to create a unique cinematic effect (like mentioned above).

Sometimes referred to as The Matrix effect, you can use speed ramping to move between fast motion and slow motion with ease, and even edit the rate of transition between the two speeds, choosing between a smooth and gradual slowdown or a quick and instantaneous switch.

Today we’re going to teach you how to use speed ramping effects depending on which of the three main editing software options we recommend you use: Premiere, Davinci, or Final Cut Pro.

Thankfully, the Youtuber Tech Infusion, who produces useful tutorials for filmmakers, motion graphic artists, and video editors, created a very easy to follow video on how to use speed ramping in Adobe Premiere Pro.

Check it out below or read our helpful recap to help you implement it yourself.

As Tech Infusion points out, the speed ramping process in Premier is pretty simple. It goes like this:

To add a speed ramping effect to your footage when editing in Davinci Resolve, we found this video by Youtuber MrAlexTech to be very helpful. Check it out below, as well as our short recap.

Another popular editing software is Final Cut Pro, and thankfully Youtuber Tech Talk America put together this video on how to speed ramp using the Mac-based software.

Check it out, as well as our recap, below.

For more about speed ramping and when you might want to use it in your videos, check out our longer article on How to Edit Slow Motion Footage here.