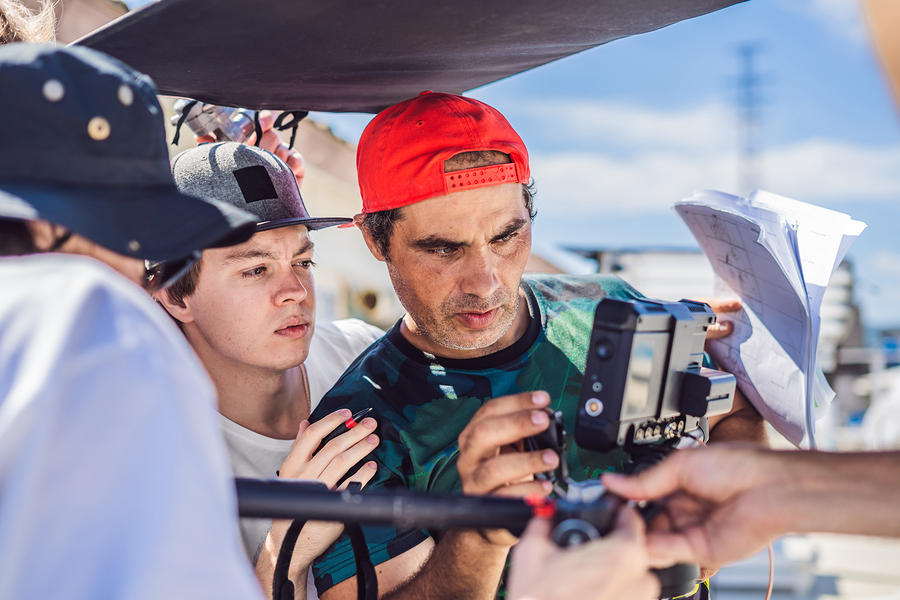 If you’re in a hurry then the SWIT CM-S75C is an incredible 3000nit monitor that offers a lot of bang for the buck.

You get great build-quality and some of the best color reproduction I’ve seen in a monitor. It also ticks all the right boxes when it comes to tools and scopes for monitoring your recordings, support 3D-LUT monitoring, anamorphic de-squeeze, 10-bit color, 4K up to 30fps (for higher framerates at resolutions 4K and above you need to convert the signal to HD – but most cameras does this today) and takes both NP-F and V-mount batteries.

If you’ve ever tried filming under the midday sun, you’ve probably come across the problem of not being able to see anything on your monitor.

The glare of the screen coupled with the fact that it simply isn’t bright enough for those conditions can make shooting in the sun a real pain.

Up until a few years ago, the solution was to either change the time of the shoot, the location of the shoot, and – when those weren’t viable solutions – put on a sun hood. But even a sun hood can only do so much.

Luckily, today we get really bright monitors with over 2000 nits of brightness that are bright enough for sunny conditions.

So I’ve done a ton of research and created this list of the best ultra-bright on-camera monitors for shooting in the sun.

The Feelworld FW279S is a great monitor that offers a lot of bang for the buck.

It has a brightness of 2200nits that it achieves through its 2200 cd/m2 backlight.

It also has a headphone 3.5mm jack (and a built-in speaker), which is nice so that you can monitor your audio even if your camera doesn’t have a headphone output.

The differences between the two (besides the price) monitors are:

Both monitors have all the tools you need for setting correct exposure and focus, e.g. histogram, false colors, focus assist, and more.

All-in-all this is a great budget-friendly option (especially if you can live without SDI and 3D-LUT monitoring) that packs a lot of power.

The ANDYCINE X7S is another affordable 7-inch monitor with a high brightness of 2200nits.

The screen has a resolution of 1920×1080 and sits nicely in a rugged aluminum housing.

The monitor comes with a lot of tools you need for controlling exposure and focus, like histogram, false color, zebras, and more.

The ANDYCINE X7S takes F970 batteries, which are not included (the battery plate is included, of course, and comes installed). But you get both D-Tap to DC cable and an SDI cable.

You also get a 3.5mm headphone output.

All-in-all this is a budget-friendly and bright monitor that does the job if you don’t need the ability to monitor LOG-footage with custom LUTs.

Check the current price on Amazon

The SWIT CM-S75C is one of the brightest on-camera monitors available on the market today.

If you’re not familiar with SWIT, I can tell you they’re a Chinese manufacturer that makes affordable but high-quality products for video- and film production.

I know for a fact, that their inexpensive LED-lights and batteries (V-mount and Gold Mount) have found their way into big productions.

And the CM-S75C on-camera monitor is no different. The 7″ monitor packs a bunch-of-features for a fraction of the price, you’d normally have to pay it.

The 1200:1 contrast ratio makes the blacks ok, despite the high-brightness (a common problem with monitors that has nits above 2000). Also, it has the ability to show PQ and HLG.

Color accuracy and color reproduction on the SWIT CM-S75C is one of the best out there and on par with the best Atomos recorders.

The SWIT CM-S75C comes with all the professional tools you need for setting correct exposure, skin tones, and focus.

You also have the ability to load your own 3D-LUT via the in-built SD-card slot when you’re monitoring flat profiles like S-log, V-log, C-log, RedLog, BMD, etc. And it comes with 30 build-in LOG to Rec709 LUTs.

You control the menus with a handy little joystick next to the screen, as the screen isn’t a touchscreen. So no greasy fingerprints all over your screen.

The SWIT CM-S75C comes with HDMI ports, but you can also get the SWIT CM-S75F if you need SDI. But then we’re talking a different price tag as well.

You also get a 3.5mm headphone output and a in-built speaker.

There’s a good reason why we chose this as the ‘Editors Choice’.

Check the current price on Amazon for SWIT CM-S75C

The first 5″ monitor on this list is from Portkeys.

It’s also the first monitor with a touchscreen which is both a good thing and a bad thing.

The good thing is that it allows for a more intuitive user interface.

The bad thing is that the screen is prone to get greasy fingerprints all over it.

But luckily it also comes with four function buttons on top that you can customize. And you get a menu button and exit button on top as well. So you can operate the screen without fingerprints which is really nice.

The screen itself has a resolution of 1920x1080p and is daylight viewable with 2200nits. The contrast ratio is 1000:1 which isn’t quite enough to render deep blacks. But none of these ultrabright monitors does that.

But luckily this little monitor comes with all the tools needed for correct exposure, so that shouldn’t be a problem. And, of course, you get tools for focus, zoom, etc.

You also get 100 sets of LUT Cube files for monitoring LOG-formats.

The power port on the back is able to your camera with a dummy battery.

Also, on the back, you’ll find a Focus Puller Interface that can control and power the Tilta Nucleus N and M Focus Follow.

If you need the latter two options, make sure to get the right camera for your camera and/or focus puller control.

And the housing is all aluminum, so it’s build really rugged.

It uses Sony NP-F970 batteries that are not included.

Another nice feature is that you can get a Bluetooth module that allows you to wirelessly control a lot of things depending on the Bluetooth functionality of your camera.

So, for instance, if you own a Blackmagic camera, you can start/stop recording, control the menu system, the tint, white balance, etc. This is really cool if you’ve rigged out your BMPCC4K, 6K, or Z-cam, and have a big V-mount battery blocking the screen.

But you can also control cameras like the GH5 with just using a simple cable.

The ikan Saga SX7 7″ monitor is a mix between an on-camera monitor and a traditional field monitor.

It’s a rugged build monitor with an aluminum chassis and gorilla glass. But this also makes the monitor heavy, so it’s better used as a field monitor on it’s own stand if you use smaller cameras.

The screen has a brightness of 2000nits which is plenty for most viewing conditions. The contrast ratio is 1200:1 which is okay.

The IPS screen has a resolution of 1920×1080 pixels and is viewable from wide angles.

The screen isn’t a touchscreen, so instead you find buttons for control on top of the camera.

It comes with all the necessary tools for dialing in the correct exposure and the focus like false color, waveform, histogram, RGB parade, zebras, peaking, and vectorscope.

You also get audio monitors.

The ikan SAGA SX7 has both HDMI in and out as well as SDI in and out. So whether you’re using mirrorless or DSLR cameras or bigger cinema cameras you can connect them to the ikan.

You also get the ability to use 3D Luts if you’re shooting LOG-footage.

The S7X supports both V-mount batteries as well as DV batteries, and it comes with a V-mount battery plate attached and a dual Sony “L” battery adapter.

You also get a mini-XLR to P-Tap power cable for a secure connection and a headphone output.

Check the current price on Amazon

The TV Logic F-7H 7″ mk2 field monitor is the brightest monitor on the market today, that I know of, with an impressive luminance of 3600nit!

Keep in mind, that this monitor is a field monitor more than an on-camera monitor. That means extra weight and no battery plate.

The screen has a resolution of 1920×1080 pixels, and TV Logic has listened to the feedback from the user so that the mk2 version has a far less reflective screen than the first iteration.

Another nice feature with the mk2 version is the addition of four function buttons on the front of the screen, which will give you quick access to the preset modes.

You also find function buttons at the top of the monitor as well as a menu scroll wheel and exit button. So – as you might have guessed by now – this isn’t a touchscreen.

It comes with both HDMI in, HDMI out, SDI in, and SDI out, and, of course, it offers HDMI-SDI cross conversion. You also get a headphone jack, and you can see the audio levels on the screen.

It will also accept Arri Alexa metadata over SDI.

As a final touch it supports several formats for anamorphic De-Squeeze.