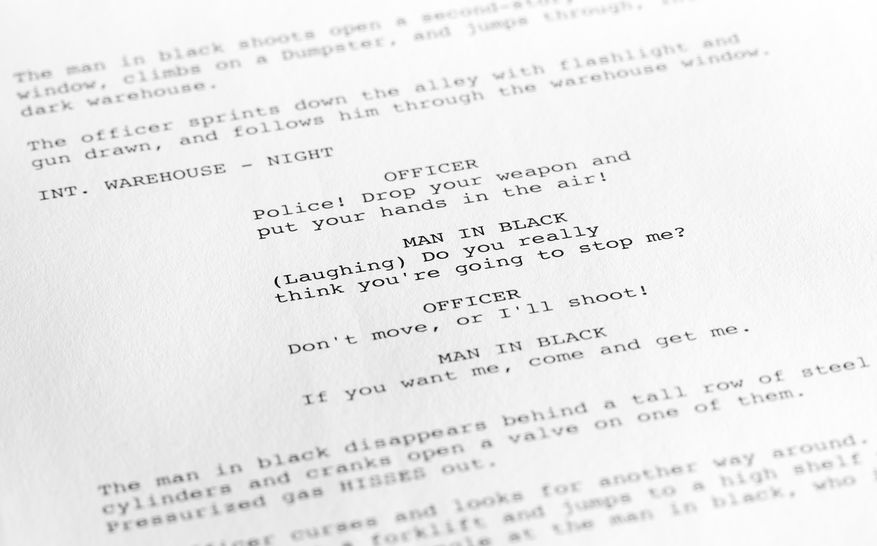 Any good aspiring writer knows that it’s not enough to watch as many movies as possible – you also have to read as many screenplays as you can, too. But where do you find screenplays online? Not just any old screenplays, we’re talking Hollywood-level screenplays.

There’s quite a few different online resources available for finding Hollywood screenplays these days, but the best options I’ve found are:

That’s the quick overview. Let’s dive each one of these in more details below!

The writer Scott Myers and his blog series on Medium called Go Into The Story is an exceptional educational resource for any writer, be it professional or aspiring.

The blog is full of so many interesting articles, riveting quotes from top writers, and a recurring series breaking down the first pages of great screenplays from popular movies.

The blog also shares script sale news headlines, and as is most pertinent to this list, libraries of over 100+ script pdfs cataloged that are ready to download to help you along the way to screenplay literacy. A lot of these are sourced from many years of FYC campaigns, so enjoy!

Internet Movie Script Database, otherwise known lovingly as its acronym IMSDb, is trying to be what IMDB is to movies but with scripts.

Something to keep in mind – while other sources on this list will share the pdf of the script in question, IMSDb keeps the movie scripts it shared embedded into the website itself. This could sometimes be due to them not existing in PDF format, or could just be IMSDb’s style.

On the site, you can sort by Title or by Genre, and there’s even a few TV transcripts on there, but the selection is fairly limited.

Simply Scripts has a strong database of feature film scripts at its disposal, and even has some TV scripts as well, though, with any of these resources, the TV selection is always fairly limited.

That could be because it’s actually rare that TV episodes other than pilots get put up online. Usually, the only TV scripts we can find are select episodes that were shared out as part of an FYC campaign.

In addition to movies and TV, there are also unproduced, radio, and anime scripts on the site, as well as scripts for plays and musicals. They even have a separate section for Oscar-nominated scripts

One last tip – definitely check out the treatment section, as treatments are sales documents, and reading treatments from films that sold might provide a good insight into what a treatment looks like and how to create them for those of you who aren’t familiar.

TV Writing is one of those understated websites that actually has a ton of value. If you are looking to write TV, you have to check out the catalog of TV pilots available on TV Writing and read as much as you can, as often as you can.

In addition to pilots, TV Writing will often post as many episodes as they can, whether it be the first few episodes, season premiere episodes, or straight whole seasons of Supernatural. It’s nice to have a variety because that’s not always the case.

The only challenging aspect about this website is not going to it and immediately finding 100 scripts to download right away. Also, if you’ll notice, the website publishes scripts in batches around pilot season – with everything shifting around, who knows when the next will be.

I didn’t even know this existed until this week, but apparently, the BBC has a huge resource for TV creators and aspiring TV writers alike on their website called the BBC Writer’s Room.

In addition to uploading and sharing access to TV scripts from BBC shows – including the whole season’s worth – the BBC Writer’s Room also has video interviews and behind-the-scenes footage associated with each show when applicable.

This one is definitely a unique resource, especially if a lot of these shows are new to you. One thing that’s good when it comes to reading screenplays is reading scripts of movies you haven’t seen, so if you want to have a very unique learning experience, try reading an episode then watching it, and then reading it again.

While Script Reader Pro is primarily a source for helping screenwriters with coverage and mentorship services, they also have a blog that will share pro screenplays from time to time

For instance, check out this piece they put together with the “50 best screenplays to read and download in every genre.”

You might find duplicates between Script Reader Pro’s posts and some of the other sources on this list, but that’s going to happen a lot, because some popular screenplays are all over the internet, while other older ones have never been scanned and uploaded at all.

The website offers an overview on how to sell your screenplays, but also boasts a pretty robust catalog of mostly older script PDFs.

It’s definitely worth checking out if you didn’t find what you were looking for elsewhere.

Daily Script is an interesting source of scripts, as it is an ongoing project meant to be a resource for upcoming writers and those learning the craft.

The premise is every day, a new script is chosen and uploaded onto the website, so if you’re following along, you can see the progress as the site’s growing script index is being built out.

This would be a good source for screenplays when you don’t know what you want to read, as you can use the script of the day as inspiration. Always good to start your day by reading a script to better hone your craft!

Studiobinder is a company you might be familiar with from reading about filmmaking online, and that’s because besides developing video, photo, TV & film production management software, they also have a killer content team developing tons of informative articles and videos.

One of their more recent endeavors has been growing a steady catalog of screenplays in their database. While it might look modest compared to some other resources on this list, Studiobinder’s catalog is curated with some of the best movies that have ever been made.

One caveat – there may be a significant amount of crossover repeats on this list compared to some of the other categories, but its solid curation makes this one of the first sights I would check out if I were looking for a good screenplay to read.  Access their screenplay collection.’

Script Slug is the last on our list, but certainly not the least. As far as web design goes, it’s one of the most straightforward designs on this list, as each script is listed on the site by its movie poster.

There is a handy search bar at the top of the page so you can search for specific scripts, and if you are interested in the 2019 Oscar-nominated films, there’s also a link underneath the search you can follow to look at those specifically.

Otherwise, it’s an infinite scroll through a bunch of eclectic titles ranging from very recent films to old school films to everything in between. It seems it was updated recently with a lot of 90s nostalgia movie scripts, which is pretty cool.

For instance, I was surprised to find the screenplay for Batman Mask of the Phantasm on there, which is a somewhat obscure animated Batman movie. I would be surprised if it was something that many people were asking for, but cool to have on there nonetheless.

Any other places to find Hollywood movie scripts?

When in doubt, you can always search for the title of the script you are looking for along with the keywords “PDF” and “download” and see what you can find.

It’s not always reliable, but I’ve found plenty of scripts doing that and I don’t think I would have found them otherwise. Just make sure you don’t click a link that simply mimics your exact search terms back to you because that site is not legit.

If you do find another resource in your searches, send any and all of them our way in the comments and we’ll gladly include them!