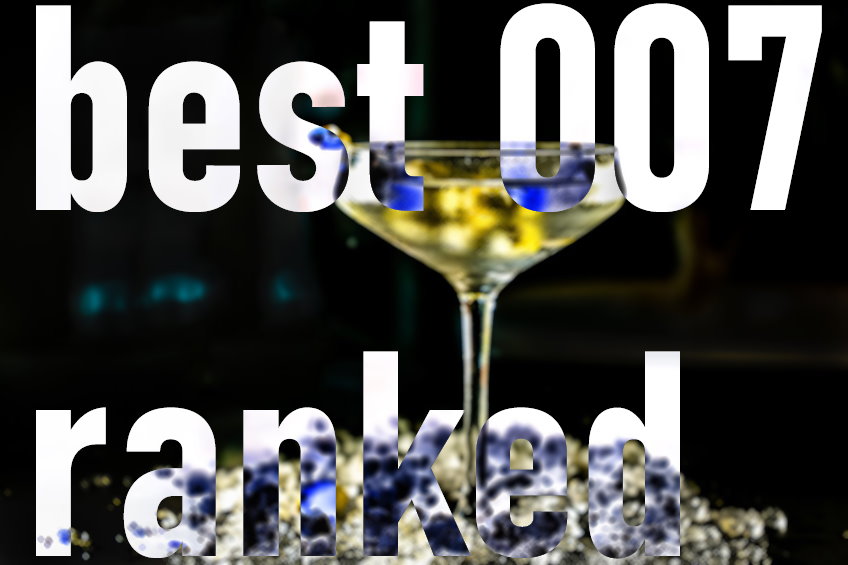 You ever woke up in the morning and asked yourself, who is the best actor to play James Bond? I did, and I’m here to set the record straight.

Many sexy European actors slipped on that iconic black-and-white tuxedo, held a Walther PPK, and toasted a martini (shaken, not stirred) over the last sixty years.

Despite their ability to woo any audience who comes in contact with their undeniable wit and charm– not all Bonds can be the greatest.

The best James Bond actor is someone who can withstand the test of time and remain a relevant icon years after his movies leave the theaters, retires from spy work, and hangs up his tuxedo for good.

Want to see how we ranked the best James Bond movies?

The best James Bonds are intelligent, attractive, tough guys who can dress to kill.

Maybe you’re an old-school, die-hard fan who loves Sean Connery. Perhaps you enjoy a bit of humor in your British spy, and you fancy Roger Moore.

A true millennial fan will recognize no one else better than Pierce Brosnan as 007. And if you’re the generation dominating Tik Tok, you didn’t even know someone besides Daniel Craig played the role.

Here is my ranking of the best James Bond actors of all time.

Honestly, he almost didn’t make my list. Actor David Niven only had one shot at James Bond in Casino Royale (1967), an adaptation of the first Ian Fleming novel to feature James Bond.

One might expect this run to be an action-packed, true-to-character portrayal, but film rights and lack of agreement led to its producer Charles K. Feldman revamping it as a satirical film.

Compared to all other Bonds, his character is a farce that barely pays an homage to a character from the novel. He is Bond in name, and that’s about it.

Niven was one sarcastic joke away from being Austin Powers.

Did you know there was an American James Bond? Believe it or not, the first actor to portray Ian Fleming’s secret agent James Bond was American actor Barry Nelson.

A guy from San Francisco, California, playing the iconic British agent is more than enough to earn him a place on this list.

You might also enjoy Why are Gangster Movies so Popular?

One and done. Australian actor and former model George Robert Lazenby entered the Eon Productions James Bond franchise for only one film to replace Sean Connery.

The youngest actor to play Bond didn’t last long, and I would probably give him a better ranking if he appeared in another film to follow up the somewhat accepted 1969 film.

The unpolished James Bond was a decent film in comparison to others. Lazenby doesn’t have all the charm and wit of other Bond actors, but he introduced the secret agent as a genuine action star with stuntwork and fistfights.

On Her Majesty’s Secret Service (1969) holds its own against the other Bond films in the library, but it’s hard to be a one-hit-wonder in the middle of Sean Connery’s career.

He wasn’t around for that long, but we have Timothy Dalton to thank for putting an end to one of my least favorite James Bond portrayals.

Audiences widely rejected Dalton’s films in the 1980s which led to the franchise’s disappearance before GoldenEye‘s (1993) release six years later.

Unlike his predecessor, Dalton went for a more grounded portrayal of James Bond, which remains close to the original character in the Ian Fleming novels.

Unfortunately, the big-screen version of Bond as a larger-than-life hero complete with perfect comedic timing and unimaginable luck became a fan favorite.

Dalton continued to have a reasonably successful acting career after his two-film run, but being James Bond just wasn’t in the cards for him.

Roger Moore is one of the most memorable James Bonds in the franchise’s history.

He is the only James Bond actor to feature in seven official Eon Production films and changed the tone of the secret agent for good.

Moore first took over the white tuxedo in Live and Let Die (1973) and immediately put a new spin on the seasoned character.

Unlike the first James Bond actor, Roger Moore went for a comical take that focused on Bond’s wit and sense of humor to outsmart the bad guys. Personally, the James Bond universe can do without the over-the-top comedy.

Sure, he set the groundwork for the witty banter and one-liners of the newest Bonds, but by the time he reached his final run in Moonraker (1979), the entire character became a full-blown caricature of the 007 agents.

Believe it or not, Pierce Brosnan was supposed to be James Bond back in the eighties. Unfortunately, TV contracts kept him from speeding down in a highway gunfight behind the wheel of an Aston Martin.

The Living Daylights (1987) instead went to Timothy Dalton, who would only play Bond for two films before Brosnan jumped back into action.

I might be biased, but Pierce Brosnan is one of the best James Bond because he originated the perfect blend of style, humor, and action.

Brosnan’s Bond gave the character more depth into his anti-heroic backstory. It’s a shame that GoldenEye was the only film worth mentioning in his four film marathon.

2021 marks the end of an era for the latest actor to portray James Bond.

Daniel Craig earned his place among the most incredible action stars in cinema despite the hate he received in the beginning.

Many people doubted he could do it based on the superficial judgment of his hair color and facial expressions, but Craig didn’t back down.

Over 15 years, Craig reinvented the character taking pieces from every Bond before him and adding psychological elements, often missing other versions.

We understood why the secret agent behaved the way he wanted and understood his relationship with the villains, his superiors, and a few of the most fleshed-out Bond girls in the series.

I will give Daniel Craig the title of the best-dressed Bond and the franchise’s savior in an age where superhero films have dominated the action/adventure genre.

And the winner is… the one and only original James Bond to ever hit the silver screen.

Originally, author Ian Fleming wasn’t a fan of Connery, but the audiences had a different reaction. Collectively, Connery’s films remain some of the highest-rated James Bond films of all time.

The movie established all the franchise’s memorable tropes, including the iconic James Bond themes, the unforgettable characters, and the recognizable catchphrases.

You can’t talk about MI6 agent 007 without considering the Scottish actor, Sean Connery. Connery was a cool as a cucumber hanging on the edge of Bond’s martini glass, “shaken, not stirred.”

You might also enjoy The 20 best fight scenes of all time.

Who Will Be The Next James Bond?

No Time to Die (2021), starring Daniel Craig, marks the end for the British actor as the tuxedo spy.

In the latest film, we see Lysanna Lynch portray 007, but who will officially take on the role in future films is up in the air.

The biggest bets are on Venom: Let There Be Carnage (2021) star Tom Hardy, with Pierce Brosnan’s nod in his favor.

Others are putting their money on Richard Madden, the new MCU film Eternals (2021).

If you’re thinking about someone who is visually perfect for the role, maybe the Netlfix hit show Umbrella Academy‘s Tom Hopper could be a great choice.

For me, I’m putting all my eggs into Idris Elba’s basket because his filmography is the best resume for the MI6 agent.

Do you agree with this list? Who is your favorite James Bond of all time?