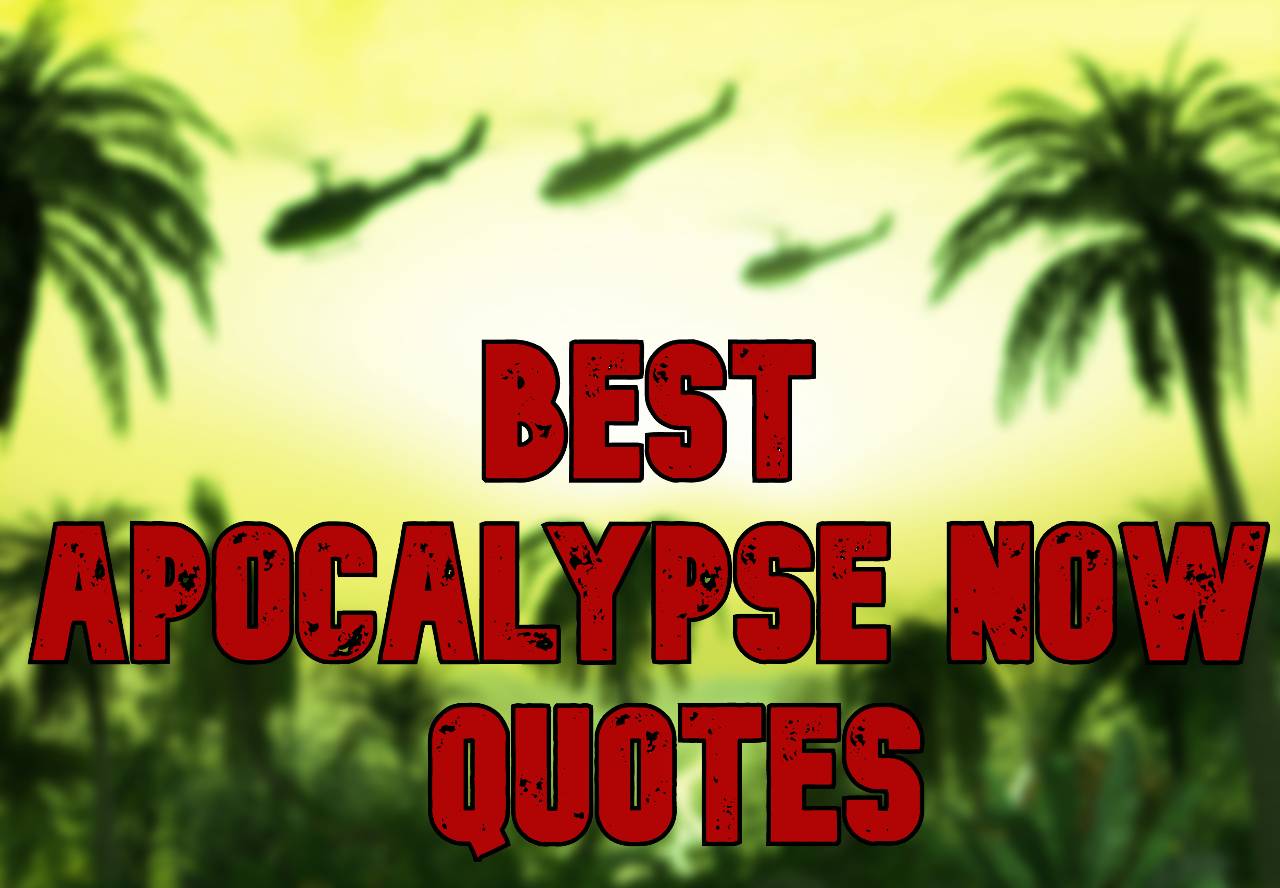 Francis Ford Coppola’s epic Vietnam War movie often tops lists of the best movies ever made, with good reason. It’s definitely my favorite war movie of all time, as you can see from this list of 60 great war movies.

Even decades after its release, Apocalypse Now is still a fresh, poignant look at the absurdities of war and how it damages everyone that it touches, including soldiers and commanders.

Besides its resonant themes, Apocalypse Now is still relevant thanks to the characters. The movie is full of memorable individuals, from the sadistic Kurtz to the jaded Willard. Their wisecracks and dialogues made the movie the hit that it still is.

Here are some of the best Apocalypse Now quotes Kurtz and company say in the movie.

The line that started it all. Jerry (played by Jerry Ziesmer) says this to Captain Benjamin Willard (Martin Sheen) in one of the movie’s initial scenes.

The army brass summons Captain Willard and gives him the secret mission of killing Colonel Kurtz, who went rogue. This is the army’s way of ordering a secret murder without outright saying so.

The funny thing is that Jerry, the character that says the most memorable line in the movie, has no other lines or scenes. He doesn’t even have a fleshed-out character, although many assume he’s a civilian intelligence officer.

Jerry Ziesmer is not even an actor but was the assistant director on Apocalypse Now and got the part when Coppola couldn’t find the right actor at auditions.

Captain Willard (played by Martin Sheen, although his brother Joe Estevez performed the voiceovers, including this line) says this during one of the first scenes in the movie. After getting drunk and trashing his hotel room in Vietnam, he gets a visit from the army brass, who gives him the mission to kill Kurtz.

This line shows Willard’s ambiguity towards his mission and the army. Before, his boredom and restlessness made him crave a mission, but later he sees it as a punishment instead of what he wanted.

9. “The bullshit piled up so fast in Vietnam, you needed wings to stay above it.”

Captain Willard (Martin Sheen) says this line after learning more about Colonel Kurtz, the army officer his higher-ups sent him to kill. Kurtz earned his promotion to colonel after staging a risky, unauthorized mission that he was supposed to get punished for—until it turned into a wild success.

The line reveals Willard’s bitterness at the army higher-ups, who are full of hypocrisy and only care about their own advancement.

Willard’s poetic expressions showing his distaste toward life in Vietnam make up some of the movie’s most memorable lines.

8. “I used to think if I died in an evil place, then my soul wouldn’t be able to make it to heaven. but now, fuck. I don’t care where it goes as long as it ain’t here.”

Chef (Frederic Forrest), one of the soldiers on the Navy riverboat that Willard joins, says this line after reaching Colonel Kurtz’s demented compound in the jungle.

Chef is a character that spends the whole movie expressing his disgust at the war. He often complains about how he wanted to be a chef, not get drafted into this war.

This line shows the final breaking point for his character. Although before he wanted to get out of Vietnam, if only so he would die somewhere nicer and have a better shot at a good afterlife, now all he cares about is getting out of the jungle, even if it means dying.

The photojournalist (played by Dennis Hopper) says this line when Willard and Chef finally make it to Kurtz’s compound. Kurtz takes over an ancient Cambodian temple and turns it into a cult, surrounded by Montagnards and trophies of his viciousness such as dead bodies and severed heads.

Some people, such as the photojournalist, take this as a sign of the man’s greatness and force of will.

This quote shows how charismatic Kurtz can be (helped by the forceful charm of Marlon Brando), but also how war can break someone’s psyche so much that a reasonable journalist can start worshipping a violent, power-hungry man.

It is also a reference to a minor character in Heart of Darkness, the novel that inspired the movie.

6. “Horror and mortal terror are your friends. If they are not, then they are enemies to be feared.”

Colonel Kurtz (Marlon Brando) says this in one of the final scenes of the movie when he and Captain Willard (Martin Sheen) can finally meet face-to-face.

Kurtz’s forces overpower Willard, but instead of killing him, they bring him to Colonel Kurtz, who begins one of the most memorable speeches of the movie. He begins to tell Willard about his theories of war.

One of his most important theories relates to horror. Most people flee horror and terror. They are uncomfortable feelings, bad feelings. However, soldiers, especially soldiers carrying out brutal wars such as the war in Vietnam, only succeed if they become comfortable with horror and terror.

Kurtz is a man that became very comfortable with inflicting horror and terror on people, which is why he became the sadistic person he was in the end.

Read more on horror and terror in movies here.

5. “You’re an errand boy, sent by grocery clerks, to collect a bill.”

Captain Willard, although he was jaded and burnt out from his time as an Army assassin, still assigns meaning to his time in Vietnam. However, Colonel Kurtz bursts this illusion with his words.

The whole movie followed Willard’s dangerous mission to kill Colonel Kurtz, which he took because on some level he enjoys dangerous missions. However, Kurtz sees Willard as someone who is unimportant, comparing him to an errand boy.

Kurtz doesn’t have a better opinion of Willard’s superiors, comparing them to grocery clerks. Kurtz is a sadist, but he is clear-eyed enough to see through the illusions of importance that military men give themselves.

4. “I am beyond their timid lying morality, and so I am beyond caring.”

Colonel Kurtz (Marlon Brando) says this line in a letter to his son, a letter that Captain Willard (Martin Sheen) intercepts and reads. The letter gives us one of our first glimpses into the psyche of Colonel Kurtz, a character that until now we only learn about from the words of others (who all have their own agenda).

In the letter, Kurtz explains the deeds that earned him the army’s ire (killing four double agents without permission). But really, the army brass hates him so much because he no longer follows their orders.

He points out that there is nothing more moral about the countless other killings the U.S. Army carried out in Vietnam and that the army’s moral “code” is just based on lies.

This quote comes from Lieutenant Colonel Kilgore (Robert Duvall) when he orders his men during an assault on the beach.

Kilgore likes surfing and only agrees to help Willard and his men after discovering that Lance (Sam Bottoms) is a former professional surfer. This line shows how he is impatient with his men and orders them around.

2. “I love the smell of napalm in the morning!”

Lieutenant Colonel Kilgore (Robert Duvall) says this line to his fellow soldiers after describing a napalm strike he’s witnessed and ordering another one.

Napalm is a very volatile chemical that the US Army used in Vietnam. It causes horrific injuries to civilians, destroys the environment, and leaves behind a potent, burning smell.

Kilgore’s love of napalm, including the smell that almost everyone else finds off-putting, is our first introduction to the sadistic side of this character.

Kilgore is one of the only characters in the movie that loves war, engaging in murder without caring about the damage done to innocent civilians. Although the army ordered Willard to go kill Kurtz, it is more than happy to keep Kilgore in a position of command.

In one of the best Apocalypse Now quotes, Kurtz (Marlon Brando) gets in one last line before he dies. After Willard kills Kurtz with a machete during the ritual sacrifice of a water buffalo, the dying colonel manages to stagger out these last few lines (a direct quote from Heart of Darkness).

In his dying moments, Kurtz grasps the horror and futility of war, colonialism, and human nature itself.

He is reflecting on the horror of what he has done in Vietnam, the horrors that other soldiers in the U.S. Army perpetrated, and the horror Willard, our ostensible hero, has also done. All his missions and elaborate moral justifications were for nothing.

See the 50 best horror movies of all time.

These are just a few of the most iconic quotes from Apocalypse Now.

3 thoughts on “The Best Quotes from Apocalypse Now”