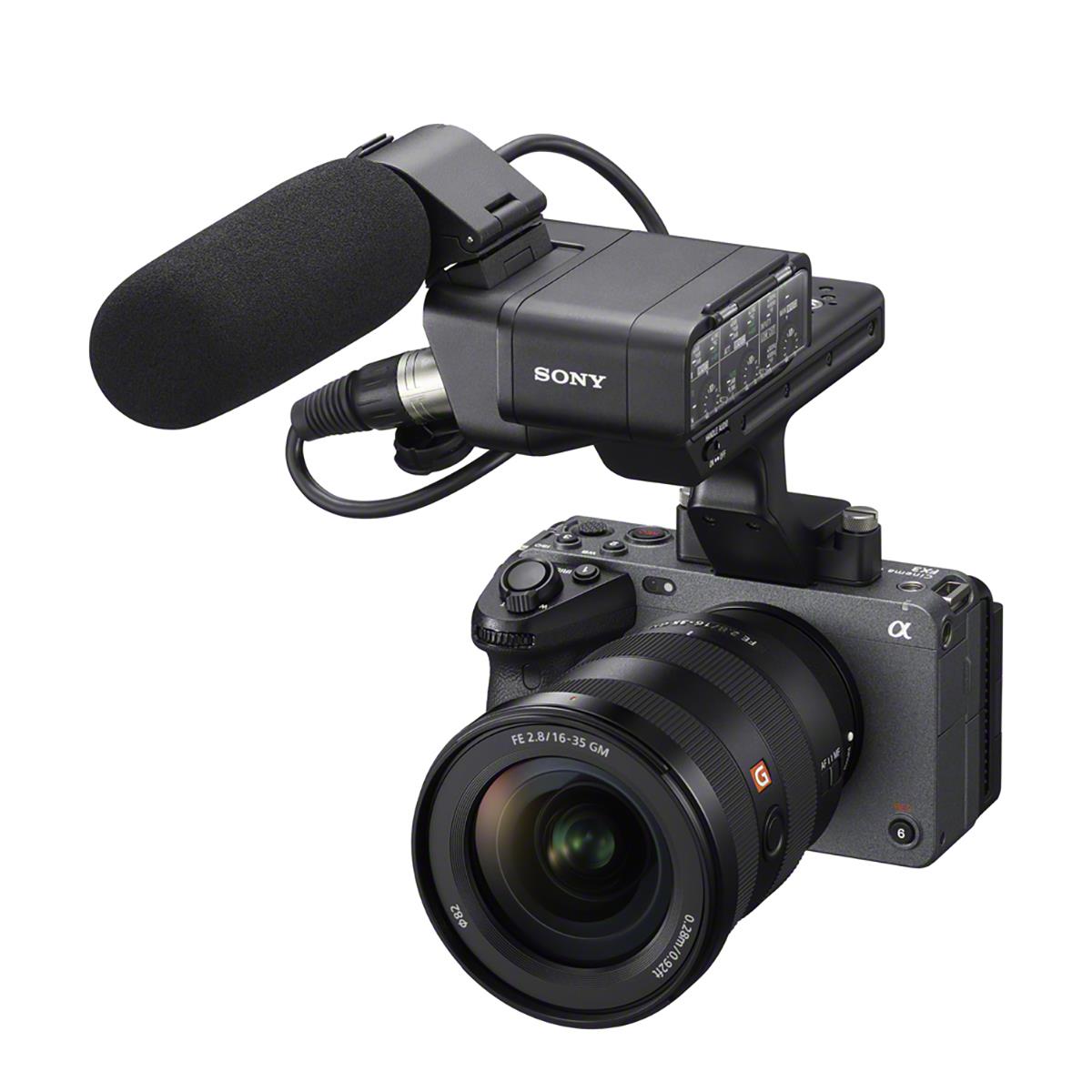 Recently Sony released their full-frame FX3 cinema camera. It’s the smallest cinema camera so far in the FX-series, including the bigger FX6 and the FX9.

The FX series is designed to be an all-in-one camera for corporate, commercial, and wedding videographers and documentary filmmakers.

It uses a Sony E-mount, which means that there are a lot of native lenses available from the start.

But the series can also easily be used by indie filmmakers shooting narrative features and short films, for whom the Sony Venice series is overkill.

The FX3 has the form-factor of a DSLR and thus competes with similar cameras such as the Blackmagic Pocket-series, the Panasonic SH-series, and even Sony’s own A7S III.

But unlike those, it comes with a detachable XLR-handle unit included from the get-go, so it’s ready to shoot fx an interview from day one.

And it’s designed so that you can use it without a cage (though I expect to see a lot of rigged cage-version soon anyway) – as the XLR-handle works both as a – well… handle – but will also hold fx an external SSD disk and an external screen/recorder.

You also get all the necessary accessories, such as a Sony NP-FZ100 rechargeable battery and charger.

Important specs of the FX3

Key Features of the FX3 include:

Sony and Canon has the best continuous autofocus on the market! Period!

And it’s nice to see that Sony has included their fast and reliable hybrid auto-focus in the FX3 — something that users have been complaining about is missing in cameras from Blackmagic and Panasonic.

Unfortunately, you don’t internal RAW recording but have to settle with All-Intra (All-I) and Long-GOP.

This was to be expected, though, since it’s the same with the FX6 and FX9.

But it would be nice to see internal RAW like with the Blackmagic Pockets or even the RED Komodo, especially since Sony aims to create an all-in-one package here, and not all videographers use Atomos recorders.

It’s nice to see that Sony has included optical in-body image stabilization. The image crops a bit when using this.

But the cool thing is that you get camera-shake metadata, which can be used to further stabilize your footage in post.

Not everyone has the luxury of a focus puller – or even shooting with cinema lenses.

Instead, a lot of filmmakers and videographers today shoot with photography lenses.

Sony has included the ability to dial in the transition speed between two focus points – from fast to slow. – Like it has been possible on cameras such as the Panasonic GH5 for some years now.

You can simply tap the screen to focus on a new spot, and the camera will make a smooth transition for you.

Sony has understood, that it is important to see when the camera is recording and not.

Since the FX3 can be used for vlogging, it is nice to see that Sony has included a light on the front also, so if you’re in front of the camera, you know that the camera is actually rolling.

The FX3 even has a dedicated recording button on the front, so you can push record while standing in front of the lens as well.

With big processors comes big responsibilities. And camera manufacturers haven’t always lived up to those in recent years.

Big processors with lots of horsepower means a lot of heat, and both Sony and Canon has had trouble with the cameras overheating.

The FX3 solves this by including a fan that can be set to auto or minimum. You even have the option to turn the fan off if you need to be extremely quiet during a job.

The Sony FX3 is a great camera if you don’t need internal RAW.

And if you’re already a FX6 or FX9 the FX3 is a no-brainer as a B-cam e.g. for flying on a gimbal or putting on a small slider.

See the full list of specs and price on Adorama.