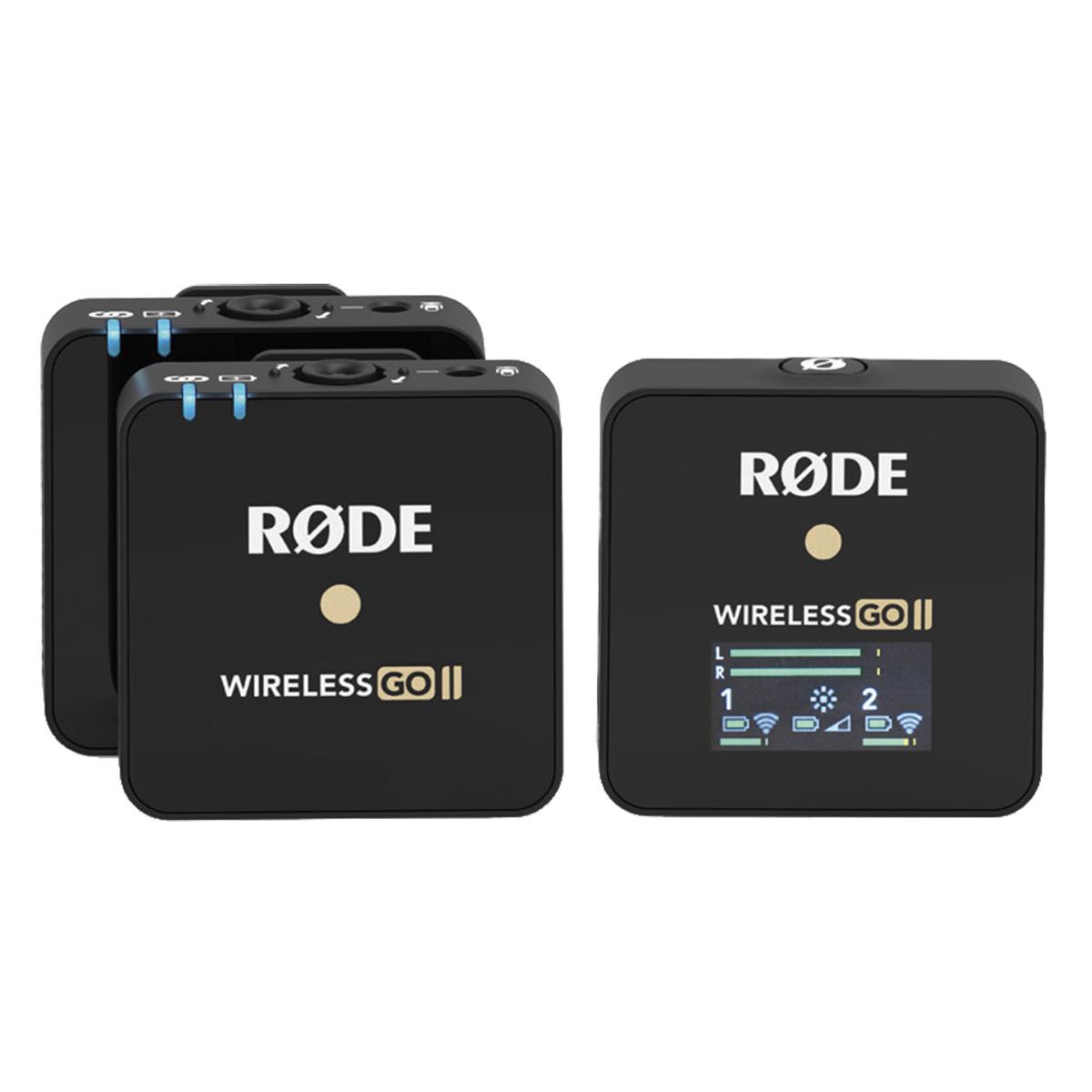 That way, you can do a two-person interview and only need to have one receiver unit on your camera.

The Røde Wireless GO II is the latest iteration of the popular Rode Wireless GO microphone system, which included one transmitter unit and one receiver.

I tested the Rode Wireless GO here together with some other alternatives — and one of those (the Fotowelt) wireless lavalier systems actually included 2 x transmitters and 1x receiver like this new kit from Røde.

The FotoWelt units are slightly bigger than the Røde and not as neatly designed, but overall the system worked perfectly, and props for being the first to come out with this type of kit in such a small package.

Let’s break down the new Rode dual kit’s key features — many of which are comparable to the first one.– but also some new additions.

The kit uses a Series IV 2.4GHz digital transmission system with 128-bit encryption. This provides a stable operation even in RF environments with lots of interference.

You get up to 200-meter range when there is a free line of sight, which from my experience holds true.

The transmitters and receiver auto-sync with the push of a button, so you don’t need to dial in specific bands.

The latency is low (3.5 – 4 ms), which is great and almost in the same territory as the pre-digital systems like the Sennheiser G3 and G4 series.

Internal back-up recording on each transmitter

The new thing is that each transmitter can capture up to 7 hours of on-board uncompressed audio with a maximum 24-bit / 48 kHz resolution. If you use the most compressed format, you can record up to 24 hours of audio on each transmitter.

This is a great feature to have, as it can work as both a back-up recording or as a fast and easy way to capture sound from your talent.

With a new app for Android and iOS called Rode’s companion app, you can then export the files to your video editing program of choice.

You can export your recordings as MP3 or WAV up to 32-bit float. However, keep in mind that the quality will maximum 24 bit.

But if you usually work in 32-bit float in your DAW or video editing suite, it’s nice to have the files already ready in this format when you start post-production.

Another cool feature is that you can choose to record in dual mono or stereo. So if you want to capture some room tone in stereo, a practice session if you play in a band or maybe record yourself playing guitar or piano in stereo, you can do so.

In that case, I’d recommend you use the 3.5mm TRS analog input and plug in some good lavalier microphones to get the best possible audio quality from the system.

In my experience, even though the in-built Omni-directional microphones are good for a lot of run-and-gun situations, adding a good-quality will really make the system shine.

The system can even record a safety track at a lower gain stop (-20 dB) to ensure your audio recording doesn’t clip.

Speaking of gain control, you get the three-stage pad to quickly dial in your preferred gain, but you can extend it to a 10-stage pad to finetune your gain for optimal signal-to-noise ratio.

TRS and USB-C inputs and outputs

The receiver can be plugged into your camera via a 3.5mm TRS analog input as well.

You can even plug it into your laptop via the USB Type-C output and use it as a small 24-bit/48kHz audio interface.

You can do the same for iOS mobile devices, iPad Pro, or Android units with the right converter cable. That’s an elegant way to have a tiny audio interface on the go!

The in-built rechargeable lithium-ion batteries give you up to 7 hours of battery life and power the units via USB if that isn’t enough.

The units will go from empty to fully recharged in about two hours.

Check the current price on Adorama.