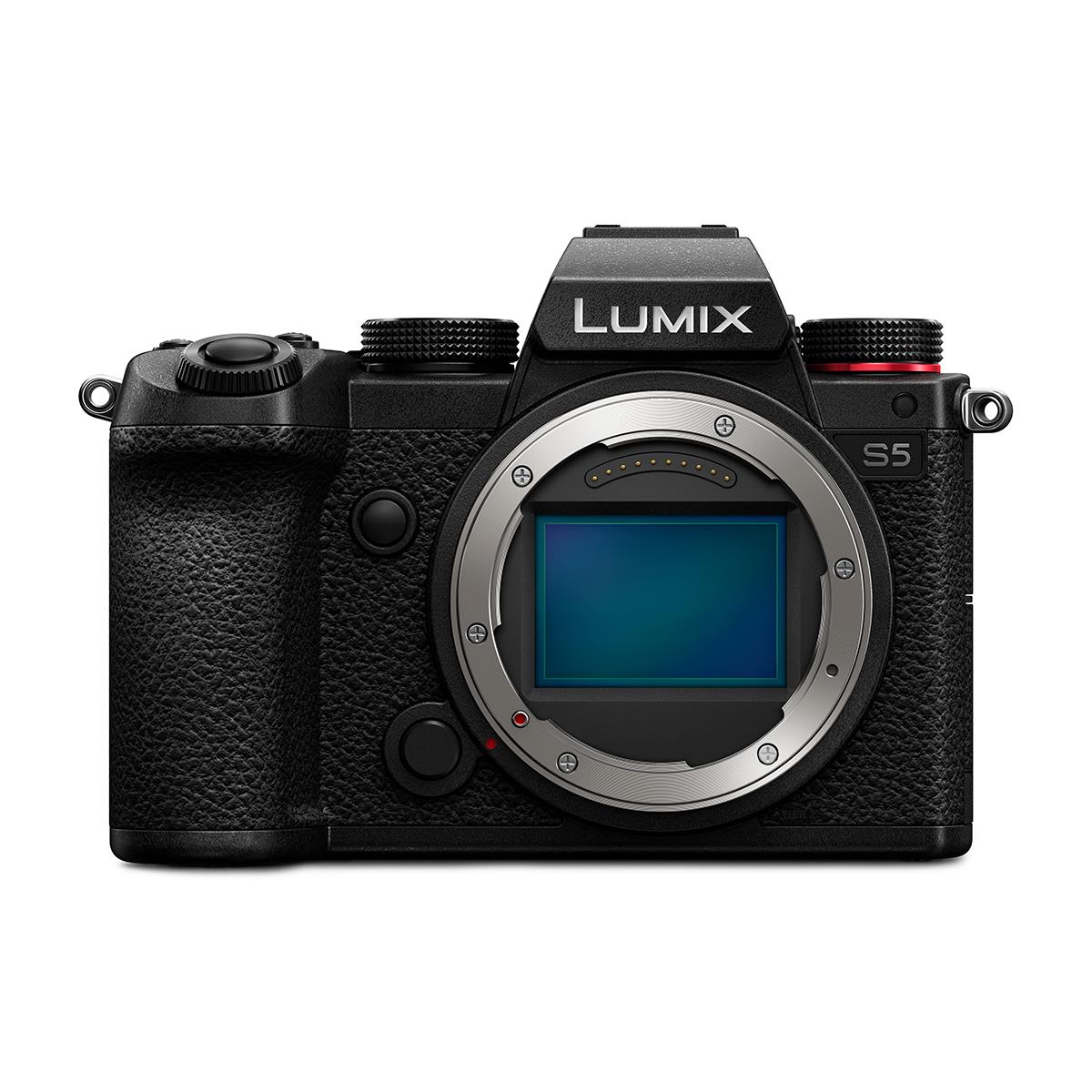 The rumors have been circulating for a while, but now Panasonic has made it official that they’re coming out with a new camera: the Lumix S5.

The S5 is a mirrorless camera that features a full-frame 24.2 mega-pixel body and uses L-mount lenses. And by the way, Panasonic also announced six(!) new L-mount lenses for the S-series of cameras, which I’ll get back to.

In essence, the S5 is a full-frame modern mirrorless hybrid camera that does photos and 4K video on a professional level.

During the live product launch live event today, which you can watch a review of below, the director of the Imaging Business Unit at Panasonic Corporation Yosuke Yamane officially introduced the Lumix DC-S5.

And let me just say, that this camera looks amazing. Let’s break all the information presented down.

Below, I’ve chosen to break it up into video features and photo features, and narrowed it down to the most exciting part.

You can see the full specs here at Adorama.

The Lumix S5 has taken all the best features of the S1 and S1H and put them into a more compact and light-weight body.

In fact, the body is about the same size as the GH5 and GH5S., which makes me think, that this is basically a full-frame GH6.

If we ever get to see a micro-four-thirds equivalent, I think we can expect to see much of those same features, but that is – of course – pure speculation.

While you’re in the 10-bit setting, 4:2:2 10 bit HDMI Output is supported along with simultaneous external drive/SD recording, which is great for recording proxies and high-quality video at the same time, as well as for back-ups.

A firmware update is already in the pipeline that will enable to film internal C4K as well.

It also has a Slow & Quick function on the top dial, so you can quickly switch between normal frame rates and high frame rates without diving into the menus.

Everyone knows that the continuous contrast-based autofocus on the Pananasonic S1, S1H and GH-series have always been pretty useless.

Panasonic has redesigned the continuous autofocus and seems to have especially focused on the face tracking part. This spells good news for the single run-and-gun shooter and vlogger.

Speaking of vlogging, of course the S5 also has the great articulating flip-out screen we’ve all come to love.

However, it is still a contrast based system, which works great for photos, but I still have my doubts if it measures up to the excellent continuous autofocus found in Canon and Sony cameras.

I’ll be keeping my eye on the user experiences when the YouTube-videos starts popping up, as I’m sure this will be something everyone will test as one of the first things.

The Lumix S5 also has the dual native ISO sensor we’ve come to know and love from the Varicam, S1, and S1H, and the GH5S. The Dual Native ISOs are 640 and 4000 when shooting in V-Log. So it will perform great in low-light conditions and have a wide dynamic range in many lighting conditions.

It features full V-log and V-Gamut that matches the color science of the Varicam and S1H. Panasonic claims +14 stops of dynamic range.

It also as HDR-video in the 10-bit HLG format. I personally love shooting this format for quick turn-around projects, as it reduces color-grading to a minimum.

Speaking of handheld, it also has the great In-Body Image Stabilization (IBIS) we seen since the Panasonic GH5. It’s the current version of Dual I.S. 2.

This provides the possibility to shoot with shutter speeds up to 6.5 stops slower than with no stabilization enabled.

So it will work great as a B-cam for shooting handheld or for flying on a gimbal for B-roll.

If we get to see a later edition (S5S) with a fixed sensor, so that this can be used as a crash cam time will tell.

The S5 includes all the necessary professional exposure tools, such as waveform monitor, luminance spot metering, and the ability to load your own LUT’s.

You also get a new feature called Live View Composite. That way, if you’re taking long-exposure photographs or shooting astrophotography timelapse, you can see star trails and light painting compiled out of several live shots in real-time.

For the anamorphic shooters out there, the S5 also has you covered.

Plus it can desqueeze AND stabilize your old manual anamorphic setups at the same time. Pretty awesome!

So here are some of the high-lights when it comes to the photo features of the S5.

With the Lumix S5, you can take several photos and have the camera stitch them together into an impressive 96MP High-Resolution photo with high detail and precision.

I’m sure your Instagram followers will appreciate this when watching your stuff on smartphones. Or not.

But if you want to take e.g. landscape photos and print them out to hang on your wall or sell posters, this feature is awesome.

It focuses fast, even in low light, and is great for shooting sports. Of course, it also has all the different modes (like burst mode) we already know from the S-series cameras.

Panasonic also announced 6 new lenses for the S-series lineup. They all share the same shape and size, which is great if you have a matte box on rods in front of them or have attached a focusing ring and wheel for manual focus.

The new lenses are:

And, of course, you have access to all the Leica lenses, the Sigma lenses, and S-PRO lenses, we already know from the S1, S1R, and S1H cameras.

I find this camera very exciting. I’ve been looking for a full-frame camera for both photography and video, but I’ve found the S1 and S1H too big and heavy.

So to have a full-frame camera like the S5 with basically the same features, but in a dust and splash proof smaller and lighter body about the same size as my beloved GH5 is simply just amazing.

What are you most excited about with the S5?