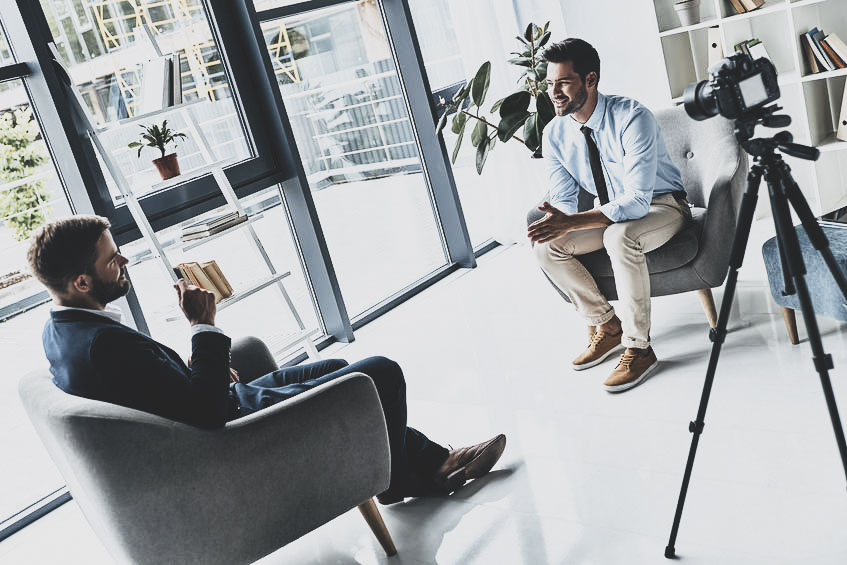 Whether you’re a videographer shooting documentaries, doing corporate videos, or a vlogger at some point you’re probably going to have to shoot an interview.

Shooting a good interview is all about getting good answers. The answers depend on how well you’ve prepared the questions, how you ask them, as well as the dynamics between you and your subject (the interviewee).

Sure the lighting can help create a certain atmosphere, the right lens can create a nice blurry background, you can frame the subject in a lot of different ways, and you can optimize the image in a lot of ways in post-production.

But after you’ve set up all your gear and created a nice looking scene, what it all comes down to is the questions and the answers.

Interviews can be very different. The questions you need to ask are highly dependent on the topic at hand.

So what I’m going to focus on here, is how you can get the interviewee to reply in a way, that is useful for when you’re going to edit the video later. It all starts when you’re developing the questions.

How to write good questions for an interview

When you’re developing interview questions, there are a few guidelines you can stick to get the best answers.

Two important rules are: ask one question at a time and keep the question short.

Don’t ask something like, “What was your initial thoughts when you first heard about the money laundering, and can you explain why you chose to go to the media later and when did you do that?”

Instead, break it down to three separate questions and let the interviewee respond to each:

“What were your initial thoughts when you first heard about the money laundering?”
“Can you please explain why you decided to go to the media later on with the story?”
“Can you elaborate on when it was you first reached out to the media?”

If there are details you want to be clarified, you can always ask your subject to elaborate further after his or her answer.

For example, if we were to ask for further details on the three questions above, you could ask the subject to be elaborate on the last question: “Could you please fill me in on, which media it was, that you approach first?”.

Don’t ask questions, which may result in a simple “yes” or “no”

When you develop your interview questions, think about how you will ask them. You don’t want to ask questions, which may result in a simple “yes” or “no” answer.

For example, you don’t want to ask something like: “Do you remember when you first reached out to the media?”.

If the subject isn’t very talkative, the answer could result in a simple “yes” or “no, I don’t,” which you can’t use in the video edit, unless you also hear your question in the video.

Instead, try to ask something like, “could you please elaborate on when it was you first reached out to the media?”.

If you’re careful how you phrase your questions, you’re more likely to get answers like, “I first reached out to the media when…” or “I don’t recall the exact date for when I first contacted the media, but I know that it was close to Thanksgiving because…”, which are far more useful in a video.

So think carefully about how you phrase your questions because the answers you’re going to get highly depends on it.

Get the interviewee to include the question in the answer

At the beginning of the interview, you should instruct the interviewee to include the question in the answer. It will form the answers into full sentences, which can stand alone by themselves.

You don’t want an answer like “Yes, that was because…” because when you have to edit the footage later, the viewer doesn’t know to what “that” refers.

The exception to this rule is when you include the question in the footage, e.g., when you have a camera pointing at you as the interviewer as well.

It is another reason why you don’t want long, complicated questions because that will be almost impossible for the interviewee to include in the answer.

If you’ve got time, try to rephrase your question a couple of times to get different results.

Asking the same questions a couple of times helps you, interviewee, to be more brief and precise in their answer. It is because subjects usually become more aware of their answer and what they want to say, the more chances they have to say it.

Unless you’re going for the initial response to a question which might catch your interviewee off guard, it is usually a good idea to think about a couple of different ways; you can ask the questions.

In my experience, people are often afraid to say something wrong. So knowing that they get the chance answer the same question a couple of times often takes some of the edges off.

Run through the questions three times

If the interviewee hasn’t been interviewed on camera before, and if I have got the time, I usually run through all the questions three times. I keep the cameras rolling the whole time, because you never know, what you’re going to get.

The first time, I let the interviewee talk and get comfortable in the situation. Even if they start talking about other things related to the subject, that isn’t related to the question.

I gently correct them if they forget to include the question in the answer too, so they get used to this technique.

It is also a good time for you to listen to your subject and find all the golden nuggets, you want in your final footage. You can ask them to elaborate on these matters later in the interview.

The third time, I ask the interviewee to communicate their point of view as short as possible. It’s a quick run-through of all the questions, and I won’t interrupt unless I have to.

By now, the interviewee knows what I’m going to ask, and they have explored the subject and knew what they want their answer to be. So they can make short, highly usable answers.

Most often I get the most useful material from the second and third run-through.

Of course, it isn’t possible to run through the questions three times with all subjects. Some people have very busy schedules. But I find that this gives me the best results, with people who are inexperienced on camera.

And though it might seem like a vast amount of time to spend on the interview, it makes your life so much easier, when you get to the editing phase. In other words, it’s time well spent.

It’s okay to cut off the interviewee

Remember, it’s okay to cut off an answer, e.g., to have the interviewee start the sentence again.

It is also okay to interrupt the interviewee if the answer gets very long and complicated or if the interview steers of the path.

Just remember always to do it kindly and concerning the interviewee, who’ve decided to share some time and maybe even personal stories with you.

I usually let the interviewee get some space in the beginning, so he or she has the opportunity to get comfortable.

Be patient with yourself and the interviewee

Remember, that it takes time to get good at doing a good interview. Especially if you also have to keep track of two different cameras, a microphone, lights, keeping an eye on the sheet with the questions, and still make the interviewee feel, that you’re present all the time.

I hope you found this post useful. If so feel free to share it. And let me know if you got any suggestions or comments.