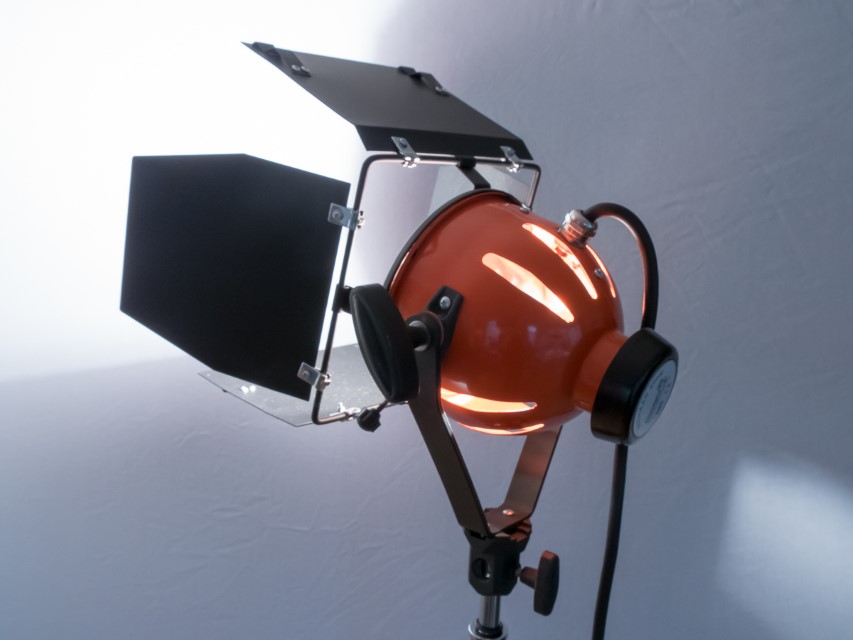 In this review, we’re going to take a closer look at the Redhead 800 Watt with a general purpose heavy-duty light stand from Cinelight.com.

Here are links to said items:

I also purchased some black from Cinelight. Redheads a know for spilling light in all directions from the front to the metal casing in the back. So I bought the so that I could better control some of is spill.

But for those who don’t know, what a Redhead lamp is, let me start by describing this industry standard workhorse.

What is a Redhead lamp?

The Redhead video light is an industry workhorse which has been used by cinematographers, directors of photography, and videographers since the 1970s.

Redheads are general purpose tungsten lights (color temperature of 3200 Kelvin) with power ratings between 650 and 1000 Watts. The most common bulb used is 800 watt.

By the way, the Redheads 2000 Watts big sister is called a Blonde, because of the yellowish tone on the original protective coat.

Redheads are open-faced meaning, that they don’t have a glass in front of the bulb compared to e.g. a fresnel light.

Because the lights don’t have a glass, the beam is instead focused by using a control knob at the back which adjusts the reflector rather than the lamp.

Redheads are versatile and are often used as key lights, floodlights to light large areas, fill lights, and backlights.

Redheads got their name from their color on the original red-orange glass fibre casings from the 1970s.

Original Redheads are made by the company Ianiro, but for a period, they were made by Mole-Richardson. Because of this, they’re sometimes also referred to as Mickey-Moles.

Today there are a lot of copies of the original Redhead on the market. The one from CineLight is one of those copies.

Why should you buy a Redhead?

For most of my client work, I use flexible LED-panels. They are incredibly light-weight, can run on batteries and mains, I can dial in the exact color temperature I want, and they don’t get hot. I can even tape them to a wall with a bit of gaffer tape if I want to. All in all, they are versatile to use.

So you might think, why would I go and buy a 800 watt Redhead lamp, which is only tungsten balanced, get incredible hot, and needs a light stand which weighs a ton? Not the most versatile lamp to use right?

Well, most of the time I use my LEDs for interviews because they give off this nice soft light which is flattering for my subjects. But, in terms of light quality, that is also all they’re good for.

With my LED-panels, I can’t get hard shadows on the face of a subject or on the wall behind. I can do this with a Redhead.

Also, because of my LED-panels are flexible, they don’t come with barn doors. This means I have little control over the direction of the light. I can use a honeycomb grid, of course, but that only gives me so much in terms of control.

The Redhead comes with barndoors, which makes it possible to control the angle of light, which is something I can’t do with my LED-panels.

The Redhead is also more efficient when it comes to flooding a larger area with light because the light emanates both from the powerful 800 Watts bulb and the surface of the silver reflector. And yet, the light itself is both small and lightweight and will be useful even in smaller rooms.

So let’s take a closer look at the Redhead and the stand from CineLight, and see how it holds up.

When you order something as delicate as a light for film and video production and two 800 Watts Osram lamps you want to make sure that it comes well sealed. Especially when you know how it is being tossed around by the delivery guys.

Even though Redheads aren’t that delicate i.e. they don’t come with any glass, the light was still packaged in a heavy duty double walled cardboardbox together with the Osram bulbs and the black cinefoil. The bulbs was further packaged in their own protective box and wrapped in foam.

The light stand had its own cardboard box, which had a small tear in it at one of the edges from the transport. But it was nothing big and the stand was not in any danger of becoming damaged.

All-in-all I could not have wished for a better protection.

What was in the box?

In the photo you can see, what was in the box.

The Redhead itself came with a protective grill and barn doors.

The protective grill is an important piece, as the bulbs get very hot, and there’s always the risk of the bulb exploding.

For this same reason, I sprung for two Osrams, because in my experience it is worth it to pay a bit extra for quality bulbs. Also, they tend to last a bit longer.

The barn doors are useful for controlling the angle of the light.

To the left you see the black Cinefoil and at the top the heavy duty light stand.

The rubbery band was not supposed to have come with this light but with the Junior Fresnel lights and used to keep the power cable wrapped.

The Redhead made from good quality metal housing, which is paint resistant to high temperatures.

Everything about it seems to be good quality and the total weight is approximately 2 kg.

The light has a good thick wire which is 5 meters long, which is a good length for smaller rooms. And the wiring inside the lamp looks to be well shielded.

Bad wiring is something I’ve seen lacking in other cheap Chinese knock-offs. In fact, there are quite a few sets of Redheads you can get on eBay, I wouldn’t dare to use myself. And I’m pretty sure they’re not up to the safety standards here in Denmark.

The nuts and bolt, which holds the light together are also sturdy.

The light came with a set of barn doors of good quality and there is nothing flimsy about them. The barn doors come with clips for attaching filters and are painted with anti-rust paint.

The knob at the back of the lamp makes it possible to focus the lamp in a 30-60 degrees beam angle, and is also of good quality.

However, I did experience, that the security bolt, which holds the barn doors (and safety grid) in place fell out after the first use.

I think the heat from the lamp made the glue on the metal dissipate. So far I’ve managed to just push the bolt back in place and glue it back on with some super glue. We’ll see how long it’ll last.

It is nice to know though, that the barn doors and safety grill didn’t fall off too.

There was also some excess grease (see the photo above), which started to flow down on the outside of the light when it started to get hot for the first time. No big deal.

The light also gave off an odor and some smoke the first time I lit it up. But this is normal and to be expected.

The Baby Stand has absolutely nothing baby about it.

The Baby light stand is a heavy duty stand made to sustain heavier lighting fixtures.

The center column of the stand is made from stainless steel, whereas the legs are made from aluminum to reduce the weight.

Both the center column and the legs are painted with a matte black finish to avoid unwanted reflections on set.

On top you’ll find a 16mm long neck spigot for the light fixtures.

The height of the stand extends from 1.09 meter up to 3.10 meter and the center column has in-built spring to avoid any accident should the column collapse e.g. due to a loose locker.

The butterfly lockers themselves are heavy duty plastic as well, so they shouldn’t collapse unless you forget to tighten them properly.

All-in-all this is a heavy-duty light stand which is built to last.

The quality of this Chinese Redhead knock-off is excellent with only small quirks.

It is well designed everywhere it matters – especially the wiring, the bolts and nuts, the housing, the aluminum reflector, and the ceramic lamp holder outperforms other Chinese copies, I’ve come across.

The only downside I can think off is that the bolt for the barndoors fell off. I hope super glue will keep holding it in place.

The Baby light stand is also of excellent built-quality and I expect it to last for years. It is built like a tank!

The black does what it should. It is made from black aluminum material and can be bend to your will and reused several times. It blocks out all light and is heat resistant. You can also make cookies from it by cutting out holes in the material.

I purchased the cinefoil primarily to control some of the excess spill light from the Redhead and it does a fine job at that. Just don’t block any of the air vents in the metal casing of the light; the lamp will overheat and can explode.

Would I buy these items and buy from CineLight again? Yes!

Do you own a Redhead light? What do you use them for? Please share any thoughts and suggestions in the comments.

Also, if you’re new to lighting, have a look at this guide to video lighting.