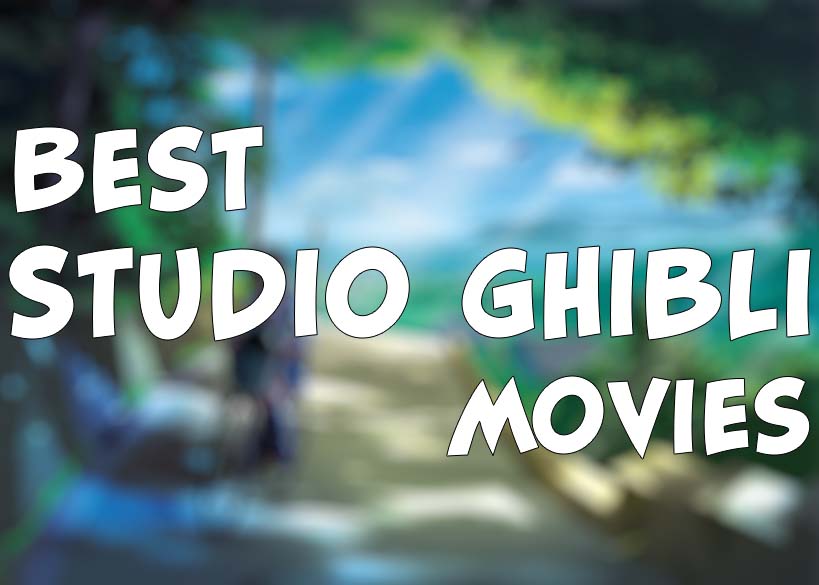 According to the brilliant minds of one of the most prominent animated “anime” studios globally, these elements are the recipe for the perfect anime film.

So who’s behind the art?

The studio is responsible for some of the most influential animated films of the 21st century, including the Academy Award-winning Spirited Away (2001), one of the only non-English speaking films to win the award.

Studio Ghibli is one of the most award-winning animated studios gaining notoriety as Japanese filmmaking’s most lucrative and creative works.

Honestly, a bad Studio Ghibli movie doesn’t exist, but if I had to pick the best…

DESCRIPTION: Depressed foster child Anna Sasaki (Sara Takatsuki, Hailee Steinfeld) stays with relatives in the wetlands of Hokkaido, where she discovers an abandoned mansion across the lake. Hidden away in the mansion, Anna meets a mysterious girl named Marnie (Kasumi Arimura, Kiernan Shipka). Although the pair become the best of friends, they must keep their friendship a secret.

When Marnie Was There is the final film Yonebayashi directed for Studio Ghibli before joining Studio Ponoc and heading Mary and the Witch’s Flower (2017). As one of the newest Ghibli films, it established that the studio is still a powerful example of anime filmmaking with a nomination for Best Animated Feature at the 88th Academy Awards.

DESCRIPTION: The Wind Rises follows the nearsighted Jiro Horikoshi (Hideaki Anno, Joseph Gordon-Levitt) through his journey to become a pilot. Jiro’s journey and support of the beautiful Naoko Satomi (Mirio Takimoto, Emily Blunt) take him on a path to become an aircraft designer for the aircraft manufacturer Mitsubishi. He creates planes for the Imperial Army and the Imperial Navy while navigating his ambitions and dreams.

Loosely based on The Wind Has Risen by Tatsuo Hori, the movie was supposed to be the final film directed by Hayao Miyazaki before his retirement in 2013. It became one of the highest-grossing Japanese films in history, nominated for several international awards, including an Academy Award, Globe Globe, and the Japan Academy Film Prize.

DESCRIPTION: When a bamboo cutter named Sanuki no Miyatsuko (Takeo Chii, James Caan) finds a tiny girl inside a magical bamboo shoot, he and his wife adopt the child.

They name her Princess and dedicate their lives to giving her a life worthy of her divine arrival on Earth, but she falls in love with life in the countryside and her friends.

When she grows older, Princess Kaguya (Aki Asakura, Chloë Grace Moretz) does everything in her power to return to the life she once had before royalty.

Based on his favorite childhood story, The Tale of the Bamboo Cutter, director Isao Takahata spent decades with ambitions to recreate the story for animation.

DESCRIPTION: A thousand years ago, an apocalyptic war, the Seven Days of Fire, destroyed civilization and created the poisonous Toxic Jungle filled with giant mutated insects.

In one of the last remaining kingdoms, the Valley of the Wind, Princess Nausicaä (Sumi Shimamoto, Alison Lohman) discovers a crashed aircraft carrying a Giant Warrior, a monstrous bioweapon responsible for the destruction of the war.

Nausicaä and her mentor Lord Yupa (Goro Naya, Patrick Stewart) must protect her kingdom and the world from the weapon falling into the hands of war-mongering Princess Kushana (Yoshiko Sakakibara, Uma Thurman) and the Kingdom of Tolmekia.

Technically, this film is not a work of Studio Ghibli. While produced by Isao Takahata and directed and written by Hayao Miyazaki, Topcraft created it.

When the studio went bankrupt, Miyazaki, Takahata, and producer Toshio Suzuki formed Studio Ghibli. This film marked the beginning of one of the greatest and iconic animation teams in the world.

It makes you wonder, what are the best 30 anime films of all time? Find out here.

When she arrives in the port city of Koriko, she moves in with the pregnant baker Osono (Keiko Toda, Tress MacNeille).

Everything seems to go well until she befriends a young boy infatuated with airplanes named Tombo (Kappei Yamaguchi, Matthew Lawrence), who reminds her that there’s still a lot to learn about being a young girl in a new city.

Kiki’s Delivery Service is the first big hit of Studio Ghibli, bringing in twice as much money as previous films. It set the standard moving forward, gaining Disney’s attention and leading to the international redistribution of famous Studio Ghibli titles.

This film also marks one of the first prominent examples of Miyazaki’s fantasy themes and homages to his love for aviation seen in future projects.

In turn, the jealous Witch of the Waste (Akihiro Miwa, Lauren Bacall) curses Sophie transforming her into an old woman. The only one who can save her is Howl, his apprentice Markl (Ryūnosuke Kamiki, Josh Hutcherson), and magical castle controlled by a supernatural demon named Calcifer (Tatsuya Gashuin, Billy Crystal).

Based on the book of the same title by Dianna Wynne Jones, Howl’s Moving Castle is one of the most financially successful Japanese films in history, following in the footsteps of previous international Studio Ghibli successes.

Mamoru Hosoda (Mirai, The Girl Who Leapt Through Time) of Toei Animation was initially penned to direct this film but left after rejecting his ideas, setting the future of anime films in motion.

DESCRIPTION: The children of an Imperial Japanese Naval officer, Seita Yokokawa (Tsutomu Tatsumi, Adam Gibbs) and his little sister Setsuko (Ayano Shiraishi, Emily Neves), are siblings who fall victim to the devastation of World War II when a firebombing destroys their childhood home in Kobe, Japan.

Together the two children struggle for survival living with abusive relatives, abandoned shelters, and the fear of starvation.

Ghibli released the film twenty years after its short story publication of the same name by Akiyuki Nosaka. Nosaka refused any live adaptations but felt Isao Takahata’s animated version was the best way to capture the reality of the horrors the children experienced in the war-torn countryside.

The critically-acclaimed animated movie is one of the greatest war films of all time.

DESCRIPTION: Ten-year-old Chihiro Ogino (Rumi Hiiragi, Daveigh Chase) is on her way to a new home with her parents when they become trapped in a spirit world.

A clever witch, Yubaba (Mari Natsuki, Suzanne Pleshette), transforms her parents into pigs for trespassing, and the only way to free them is to work for the witch’s bathhouse.

With the help of her new magical friends Haku (Miyu Natsuki, Suzanne Pleshette) and Lin (Yoomi Tamai, Susan Egan), Chihiro sets out to rescue her parents.

Arguably one of the most famous Studio Ghibli films of all time because of its international recognition, Spirited Away is a fantasy masterpiece.

The film caught the attention of John Lasseter of Pixar Animation Studios, leading to Walt Disney’s distribution gaining immense popularity and the status as one of the greatest animated films of the 21st century.

The girls discover tiny magical spirits living in the house, and their curiosity eventually leads them into an enchanted forest to meet a sizeable furry spirit named Totoro (Hitoshi Takagi, Frank Welker).

This film stars one of the most recognizable mascots of Studio Ghibli, the loveable titular character Totoro. A story loosely based on Miyazaki’s own life, it’s one of the most popular entries to Ghibli films for anyone, with an emotional level and heartfelt characters.

If you don’t believe in the iconic power of Totoro, see if you spot his easter eggs in other popular Ghibli films like Pom Poko, Kiki’s Delivery Service, Whisper of the Heart, and Spirited Away.

DESCRIPTION: After a demon attacks a rural Japanese village, Prince Ashitaka (Yōji Matsuda, Bill Crudup) manages to save his people but is cursed. He discovers the only cure for the curse resides in the western lands where a Great Forest Spirit lives.

Unfortunately, the ongoing feud between Lady Eboshi (Yūko Tanaka, Minnie Driver), the ruthless leader of Iron Town, and the vengeful human daughter of the wolves, San (Yuriko Ishida, Claire Danes), stand in his way of finding the Great Forest Spirit.

A stunning visual masterpiece of fantasy and war, Princess Mononoke is one of the greatest works of Studio Ghibli and director Hayao Miyazaki.

While it doesn’t hold the same international awards as other Studio Ghibli films are the only film to beautifully blend violent adult themes of natural destruction and war with the usual Ghibli elements of fantasy and love.

In comparison to all other Studio Ghiblis animated films, this film firmly holds a place amongst one of the greatest films of all time.

Studio Ghibli is a Japanese animation film studio best known for some of the world’s most popular Japanese animated feature films. Directors Hayao Miyazaki, Isao Takahata, and producer Toshio Suzuki founded the studio following their success with Topcraft’s Nausicaä of the Valley of the Wind (1984).

Topcraft was Ghibli’s predecessor known for other popular animated films like The Last Unicorn (1982) and The Hobbit (1977).

The Studio Ghibli aesthetic is often referred to as cottagecore.

Cottagecore romanticizes and sentimentalizes the rural way of living, which is obvious from the studio ghibli scenery that usually takes place in the countryside.

Cottagecore was coined in 2018 on Tumblr, and according to the e-zine VOX it is:

[…] doilies, snails, and DIY fairy spoons crafted from seashells. It is illustrations from Frog & Toad, stills from Miyazaki movies, two girls kissing in a forest in springtime. It is a laughably arduous tutorial on how to make homemade rosewater whispered to you in a British accent. It is eyelet blouses and soft cardigans and hair ribbons and too much blush. It is Beatrix Potter, The Secret Garden, Miss Honey from Matilda, the Shire. Taylor Swift’s indie rock quarantine album Folklore? Cottagecore […]

The Studio Ghibli and Miyazaki scenery is portrayed with a nostalgic love for Japanese rural life mixed in with aesthetic magic elements of folklore.

What’s your favorite Studio Ghibli movie? Let us know in the comments below.