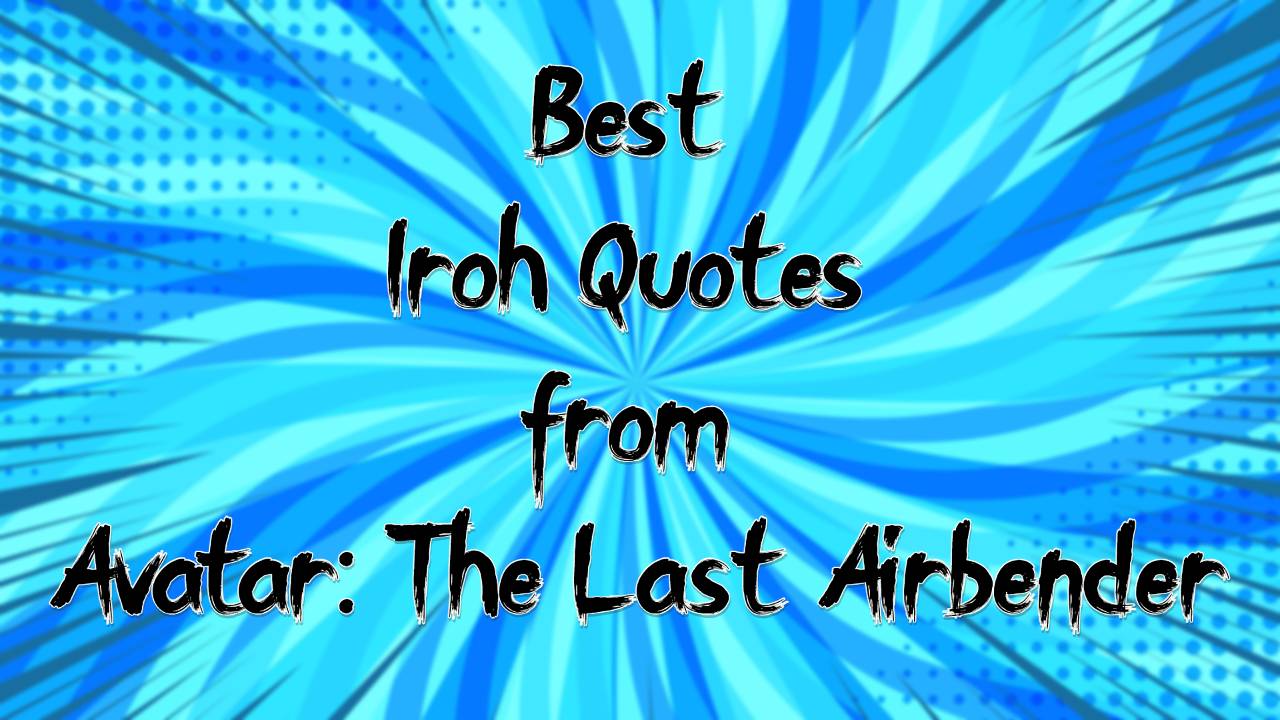 Avatar: The Last Airbender ended years ago in 2008, but it’s still embedded in our memories thanks to the epic plotlines, beautiful animation, and great characters.

One of the best characters from the anime show was Uncle Iroh, whose wise advice was sometimes lost on Zuko, but stuck with audiences for years to come.

Besides his wisdom, Uncle Iroh is also very funny, taking every situation in stride.

This combination of intelligence and humor makes him one of the most memorable characters in the show with plenty of iconic lines.

Here are some of Iroh’s best funny but wise quotes on everything from tea to destiny and hope.

1. “Life happens wherever you are, whether you make it or not.”

Uncle Iroh (voiced by Mako in this season) says this line to his nephew, Zuko (voiced by Dante Basco) when they wind up in Ba Sing Se working undercover as tea shop employees.

Impatient Prince Zuko is frustrated at his change in circumstances and complains that the city feels like a prison. Iroh gives him this advice to encourage him to accept life instead of complaining about his circumstances.

Even though the advice is for Zuko’s ears, it can apply to all of us and help us accept things we cannot change and move on.

2. “There is nothing wrong with a life of peace and prosperity. I suggest you think about what it is that you want from your life.”

This is another line from Zuko and Iroh’s time in Ba Sing Se when Zuko is frustrated that he cannot pursue his destiny of capturing the Avatar.

Iroh spends the whole show, including this episode, trying to steer Zuko away from his devotion to his father and ideas of destiny and honor.

Iroh tells all of us that life isn’t about being the most famous or getting the most glory, sometimes the finer things like a quiet existence with tea and good friends are much better.

3. “Perfection and power are overrated. I think you are very wise to choose happiness and love.”

Iroh’s advice is not just reserved for Zuko. In season 2, when they’re technically on opposite sides, he gives Aang (voiced by Zach Tyler Eisen) advice after Aang is sad he couldn’t let go of Katara to reach the Avatar State.

Iroh tells him that he made the right decision, and that power is not worth giving up on the people that he loves. Luckily for Iroh, Aang is a much more receptive audience than Zuko.

This quote shows us more of Iroh’s wisdom and generosity. He’s willing to help everyone, not just his nephew.

4. “Sharing tea with a fascinating stranger is one of life’s true delights.”

Uncle Iroh says this line to Toph (voiced by Jessie Flower) during their encounter in season 2. Toph fights with the Avatar and runs away, then bumps into Uncle Iroh, who is separated from Zuko.

Although they are on different sides (even if they don’t know it during their conversation), the two have a cup of tea and talk about their problems. Iroh helps Toph figure out her feelings and go back to her friends.

The quote also touches on a running theme in the series—Uncle Iroh’s love of tea. He always has to stop for a cup of tea, often frustrating Zuko.

However, it’s not the beverage itself that inspires Iroh so much (although tea is pretty good), it’s the act of slowly sipping tea and getting to know someone that way.

5. “Pride is not the opposite of shame, but its source.”

Iroh gives us this gem of a quote during one of his fights with Zuko. Zuko is frustrated with his failures to capture the Avatar, and Iroh tells him to let go of his shame to find release from his inner turmoil.

When Zuko tries to argue that he doesn’t feel shame, but pride, Iroh says this quote and explains that pride and shame are the same things.

Throughout most of the series, Iroh tries to cure Zuko of his conditioning, which includes his pride.

Zuko’s pride gets him into trouble all the time and is a source of insecurity for him. Iroh gives him the way to true freedom—humility—but Zuko is not ready to hear that yet.

6. “It is important to draw wisdom from many different places… if we take it from only one place, it becomes rigid and stale.”

Iroh doesn’t just give Zuko advice that will be useful in the future. He teaches him practical skills, such as how to redirect lightning so he can fight his sister, Azula.

Zuko is surprised to find out that his uncle, a feared general in the Fire Nation, uses a martial arts form from the Water Nation to redirect lightning.

Iroh, true to form, uses this experience as a teachable moment. He explains to Zuko that for true wisdom, you have to be open-minded.

This is mind-blowing for the prince who was raised on a lifetime of Fire Nation propaganda about his home nation’s superiority.

It also foreshadows Iroh’s role as a leader in The White Lotus, an organization that has members from all over the world.

7. “In the darkest times, hope is something you give yourself. That is the meaning of inner strength.”

Lines from a children’s TV show have no business being this inspirational. Iroh gives this advice to Zuko in the season 2 episode “Avatar Day,” when the two are completely broke and on the run after failing to capture the Avatar.

Zuko is broken and sees no way out, but Iroh tries to push him to stay positive and keep going.

Although most of us won’t have to chase an all-powerful being to restore our honor, we will experience dark times, and this line is relevant to so many different circumstances.

8. “While it is always best to believe in one’s self, a little help from others can be a great blessing.”

In the fan-favorite episode, “The Tales of Ba Sing Se,” Iroh gives a would-be mugger some advice and helps him turn his life around.

The criminal is grateful and says that nobody ever believed in him before. Iroh’s line shows us that none of us are isolated.

Even people that want to be independent (like his headstrong nephew) need support from others to flourish. Self-belief and confidence aren’t enough.

Throughout the series, viewers (and other characters) see Iroh as a comic relief character that gives out great wisdom.

However, he hides a deep, tragic secret that we only learn about in the episode, “The Tales of Ba Sing Se.” When Iroh led the siege on Ba Sing Se many years ago, his own son died in that battle.

On his birthday, Iroh goes outside the city, makes a little shrine, and sings this song while crying and apologizing to his son for not saving him.

The whole scene gives us more insight into Iroh’s motivations. He is so adamant about helping Prince Zuko because he wants to save him from the military machine that killed his own son, and he is trying to deal with his guilt.

There are so many more iconic lines from Uncle Iroh. Which one is your favorite?